An Insight into Exception Handling – 2

The following are the various topics that we’ll look at in this blog series: –

In the previous blog, we have already looked at why we need to raise exceptions.
In this blog, we will look at the second topic – General principles when handling/raising exceptions.

This can be illustrated by an example program depicted by the following sequence diagram. Please note that some details have been omitted out for the sake of clarity: – 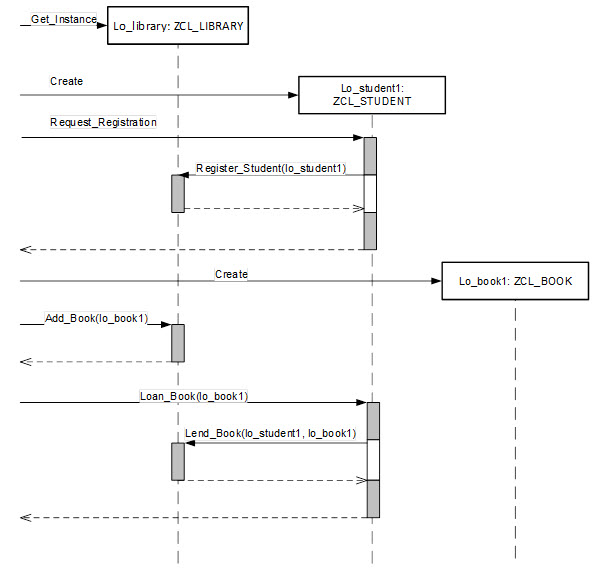 The execution of the above program is successful because the pre-requisite for lending a book to a student (the student must be registered as a member of the library) has been met. However, the caller, could mistakenly skip registration of the student. What will happen in that case? Let’s take a look at the source code of the ZCL_LIBRARY=>LEND_BOOK method. 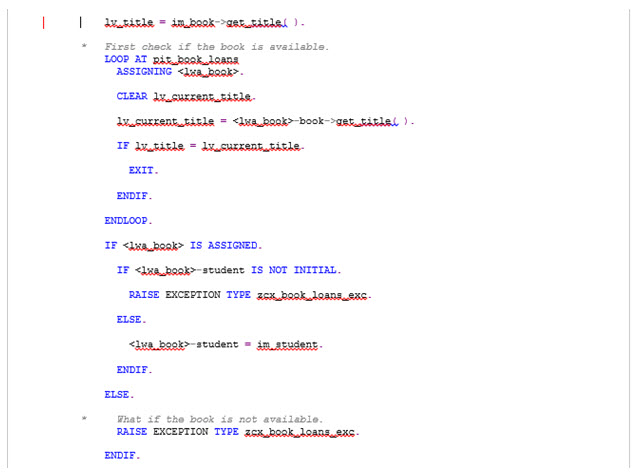 The code above contains no check for the registration status of the student trying to loan-out the book from the library. If the student was not registered by the calling program, the library will still end up lending the book to the student. The method was written with the assumption that the student passed to it as a parameter is a registered member of the library.

In order to prevent this, we introduce logic within the ZCL_LIBRARY=>LEND_BOOK method to check whether the student is registered. If not, we raise an exception. Subsequently, in the calling program, we handle this exception and print an appropriate message on the screen in case the exception occurs. This is shown in the source code below: – Now, when the caller tries to lend books to a student who is not registered as a member, an exception is raised by the ZCL_LIBRARY=>LEND_BOOK method. The caller of this method (ZCL_STUDENT=>LOAN_BOOK) in turn propagates it to the calling program ZEXC_HNDL_EXMPL2 where the exception is handled to print an appropriate message.

Now, when the program is run the following message is printed on the screen: –

Catcher in the Rye could not be loaned.

The program in the previous blog also illustrates this principle.

But this will never happen

This ties in very closely to the principle ‘Think locally, don’t make assumptions about the calling program’. However, here we are talking about assumptions with regards to the state of the program or the underlying data store. While coding a program unit, we might assume that the program will be in a certain valid state or the data in the under-lying data store will be in a certain valid state at the point where the program unit is executed. However, we often fail to describe the behavior of the program unit should those assumptions prove to be untrue. In order to make our programs more robust, this is a factor that ought to be considered. 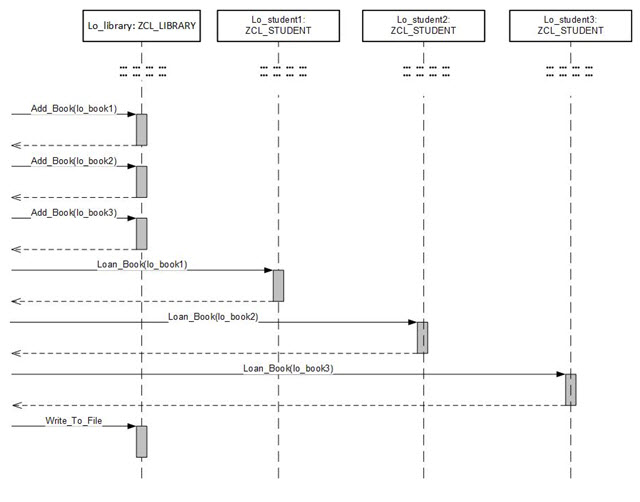 Some details have been left out of the above diagram for the sake of brevity.

Another program reads the data from the text-file (created by the program above) to re-create the students, books and the book-loans. This is achieved by calling the ZCL_LIBRARY=>READ_FROM_FILE method. The source code of this method is as follows: – 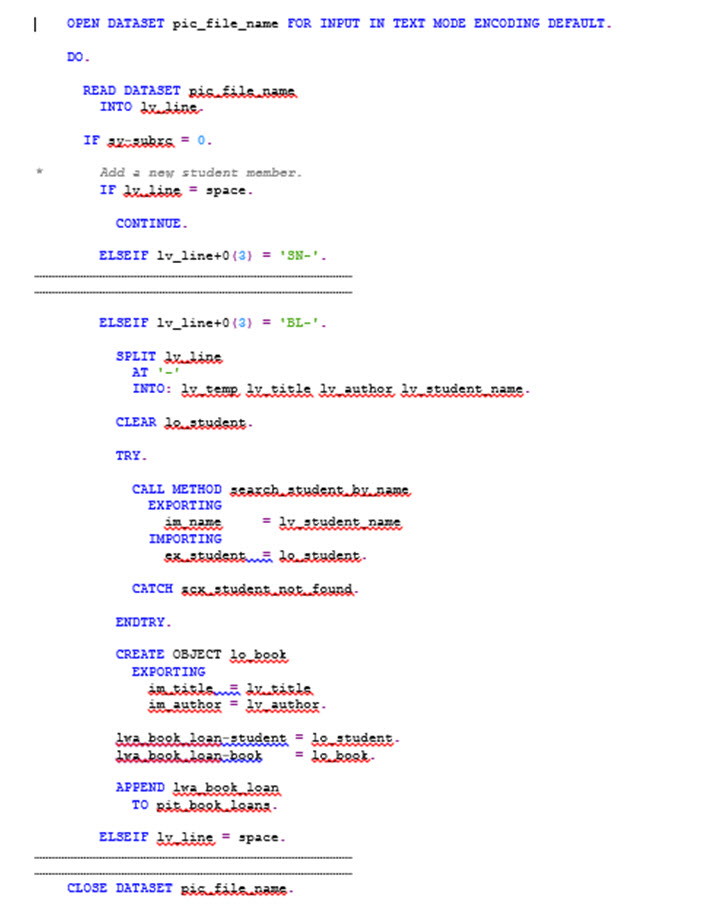 This method assumes that the data in the source text file is correct.
Based on this assumption, it: –

The problem here is that it was assumed during file read that the data in the source text-file would be correct. The possibility of a book-loan to a student who is not registered was not considered, because it was assumed that this would have been catered to and validated by the method WRITE_TO_FILE.
Ideally, it should have been verified in the READ_FROM_FILE method that each book is loaned to a student that is registered. If not, an exception must be raised.

The modified source-code is as follows: – 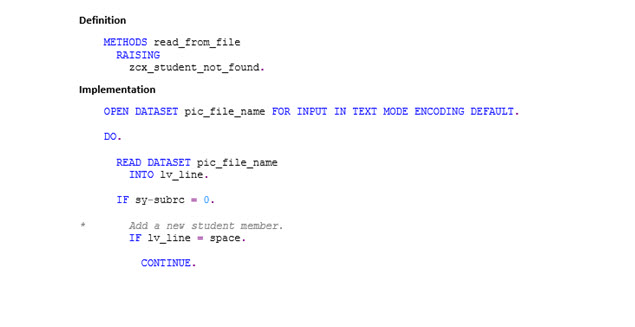 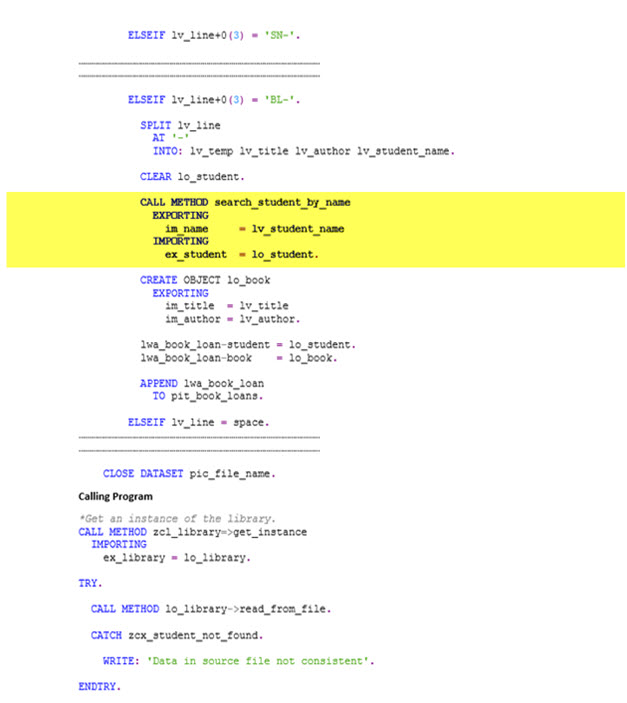 In the above source code, the exception raised by the method SEARCH_STUDENT_BY_NAME instead of being handled by a blank handler has been propagated to the calling program since further processing cannot continue if the student has not been found. The calling program, in turn, prints an error message on the screen in the event of an exception.

When an erroneous state is encountered in a program unit, we must throw an exception right at that point because it is here where you will have the most precise information about the error along with the context in which the exception has occurred. 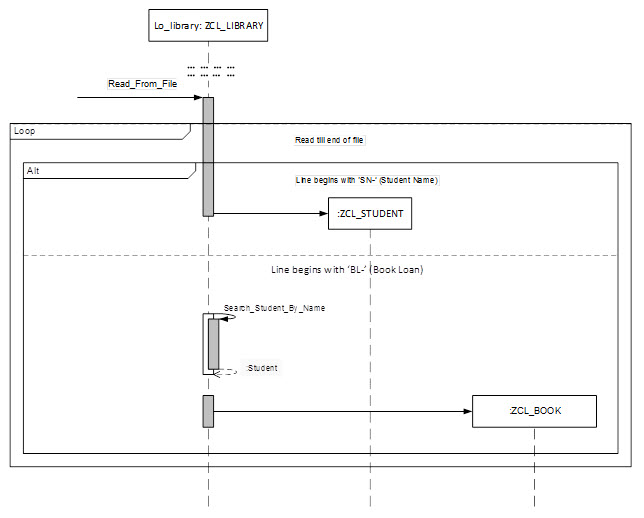 Let’s assume that the SEARCH_STUDENT_BY_NAME method does not raise exceptions and has the following source code: – 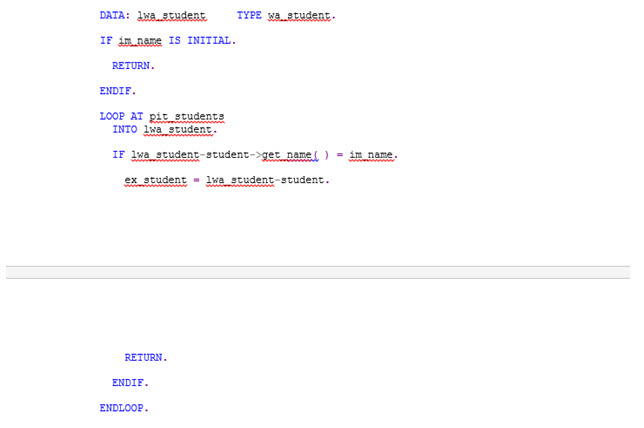 In the code above, the method will return a blank student instance in the parameter EX_STUDENT if either the name (IM_NAME) is blank or a student matching that name is not found in the internal table PIT_STUDENTS.

It is the calling method READ_FROM_FILE which has been made responsible for raising an exception in response to a blank student instance. The code in READ_FROM_FILE is as follows: – 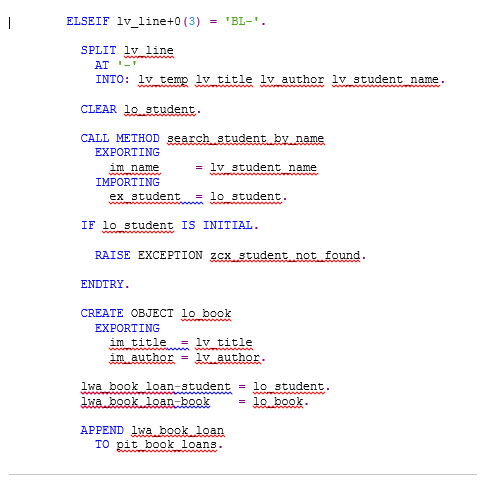 This problem can be fixed by raising the exception early in the SEARCH_STUDENT_BY_NAME method itself. This is shown in the code snippet below: – 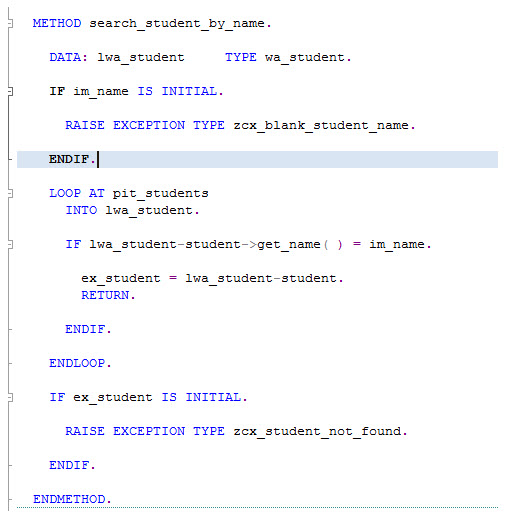 In the calling method, we can then introduce exception handling as follows: – Here, the method propagates the ZCX_STUDENT_NOT_FOUND exception and has a blank handler for the ZCX_BLANK_STUDENT_NAME since we do want to continue processing if the student name against a book is blank.

When it comes to handling exceptions, the calling program might do any of the following: –

As a concluding remark to this blog in the series, let me emphasize that these are principle/guidelines that need to be considered when thinking about exception handling. Application of these principles without thought could prove to be an over-kill on certain occasions and may result in bloated code. 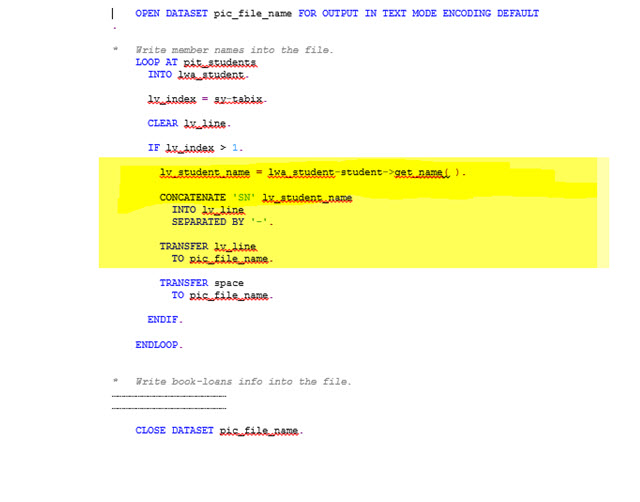