Would you believe, if I said that the screen below, is a selection screen and not a dynpro? 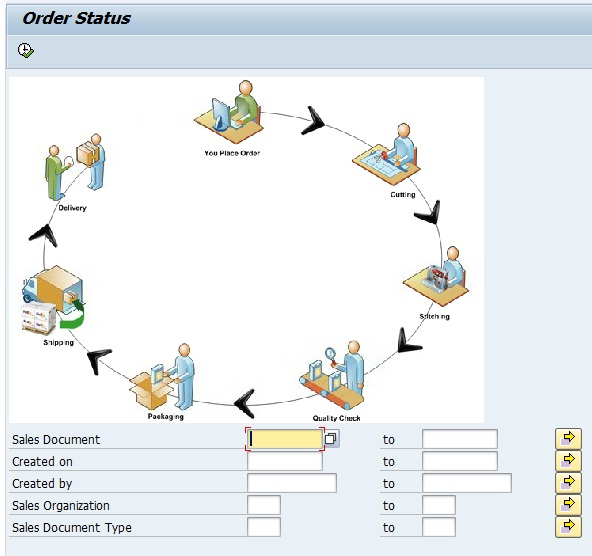 I could find a lot of posts on the web, on how to include a selection screen, inside a dynpro.

The way to create a subscreen area on the selection screen, is by creating a tabbed block.

What this does is, it creates a subscreen area named mytab on the selection screen, with two tabs named button1 and button2. What this also does is, it creates a workarea inside the program, with name mytab, containing 3 fields, namely PROG, DYNNR and ACTIVETAB. When the 1st pushbutton is pressed, mytab-dynnr is assigned 100 and when the 2nd pushbutton is pressed, mytab-dynnr is assigned 200. Thus, when a person presses on each tab, the subscreen called in the subscreen area is different.

Now, I may include the dynpro in one of those tabs and the output may look like

In many cases, I do not have more than one dynpro to include on the selection screen. So, I don’t need more than one tab. So, if I remove the unwanted tabs and keep the dynpro in one of the tabs, the output may look like.

Needless to say, this looks a bit akward.

So, I remove the final tab also, and just keep the frame, i.e., my code is reduced to just

If I just execute the program now, it will result in a dump

This because, the program doesn’t know which subscreen needs to be called.

More than it, it is described in official ABAP reference:

So, as I understand, it may be used as a feature supported by SAP.

Here is the report

The report also contains a screen with the following PBO logic:

You can also do the same type of thing with a docking container which you define during the output of the selection screen.  You can then include anything in the docker,  included even the results of the report as an alv tree or grid!  (You export the results of a previous run to memory and import it back during initialisation)