How many times have you stared at the television screen, rooting for your favorite club to top the charts in the coveted English Premier League?! How often would you have cursed the goalkeeper for misjudging the trajectory? Or maybe fretted over the lack of form of the most prized defenders, or forwards for that matter. I am sure a lot of “what-if” or “only-if” runs through your mind after every single match. Now then, SAP Lumira can be used to demystify the conjecture around such possibilities.

As the EPL drew to its close in May 2015, Chelsea emerged as champions while a few other teams qualified directly for Champions League and Europa Cup by virtue of their performance. Some other teams need to go through playoffs while 3 teams got relegated! The image below sums up the story with rankings and next season qualifications. 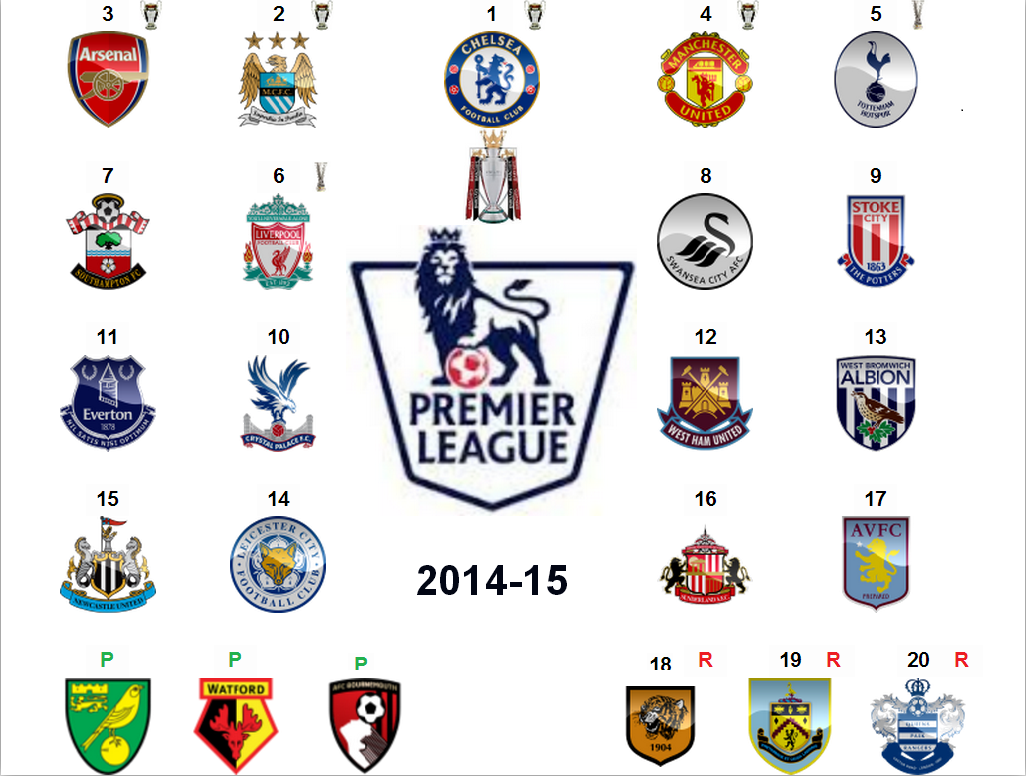 Coming back to conjecture, I used SAP Lumira to analyze the EPL 2014-15 data and came up with patterns on why teams performed the way they did and what could have happened differently !

Excited?! Well so was I when I started doing this analysis! Let’s start with the win-loss-draw analysis!

Based on the combination chart below we can see that Chelsea is the champion with maximum points and maximum wins. One interesting thing that we can notice is that for top teams points and number of games won vary linearly which is because they have won most of their games. For teams at the bottom of the rankings, number of draws vis-à-vis losses determined their survival or relegation. Take for instance Sunderland and Burnley. Both the teams had the same number of wins but Sunderland had the maximum number of draws which ensured their survival while Burnley got relegated. Now look at Queens Park Rangers, they won more matches than Sunderland but got relegated because of lower number of draws! If Burnley or Queens Park Rangers had converted some of the losses into draws they might have been safe. On a different note had Sunderland made some wins out of those huge number of draws they might have finished between ranks of 10 to 13!!

The parallel chart (leaderboard) below analyzes goals for (GF) and goals against (GA) and so in effect, examines the performance of the team in attack and in defense. Manchester City had Maximum GF and low GA which could have landed them at the top of the table. However, they scored too many goals in some of their wins (like against Queens Park Rangers) and hence in spite of highest number of goals scored they could not garner the highest points. Chelsea had the second highest number of GF but least GA which seems to suggest that an impeccable defense was a key driver to their success. The top 4 show high GF and low GA which implies strong attack and defense. Tottenham had GF almost equal to GA which got them the 5th spot! Evidently a stronger defense would have pulled them up the ranks. All the 3 relegated teams have very low GF and this appears to be the key reason for their failure. For example Hull City had lesser GA than Tottenham which ended up 5th! If Hull city had scored more goals they would have certainly not been relegated. So the pattern that emerges is that for the top teams better defense was the determinant while for the bottom teams a weaker attack resulted in relegation.

The top 4 individual goal scorers and team-wise total number of goals are depicted in this analysis. Both the charts clearly show that Chelsea won in spite of not having the most prolific goal-scoring players. This reiterates the earlier finding that a strong defense went a long way for Chelsea. On the other hand, Manchester City excelled in their goal-scoring but ended up second best! Perhaps a stronger defense would have created a different story. Another interesting stat stands out in this analysis – although Queens Park Rangers got relegated, their striker Charlie Austin was one of the top goal-scorers! In fact the relegation notwithstanding, Queens Park Rangers stands eighth in terms of total goals scored! One should not be surprised if some of the other clubs queue up to him for a transfer! 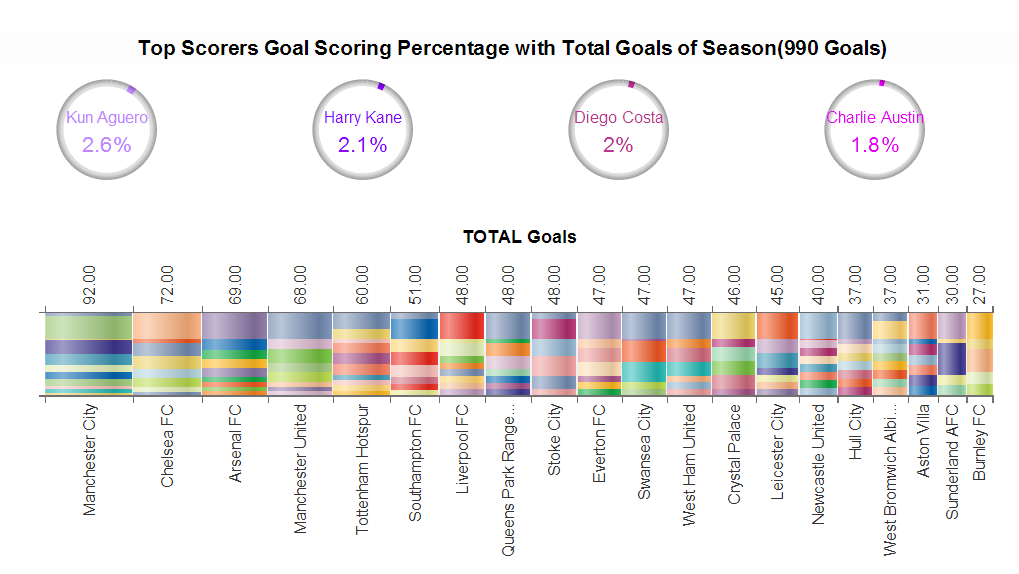 This analysis depicts top 20 midfielders through a word cloud. Interestingly, there are 3 players from Liverpool in the top 10 although the club finished 7th in the rankings. There are 2 midfielders each from Chelsea and Manchester City in the top 10. This is expected since both the teams had an outstanding overall performance. In fact Eden Hazard of Chelsea is the best midfielder and also the best player in EPL 2014-15. Stewart Downing from WestHam appears in the top 10; his efforts were for a losing cause as West Ham finished 12th. His performance though, sets him up to be a prime target for transfer. Arsenal and Tottenham too had good midfielders which reflected in their overall standings. Couple of midfielders from Swansea too put up a good show and their team finished 8th. 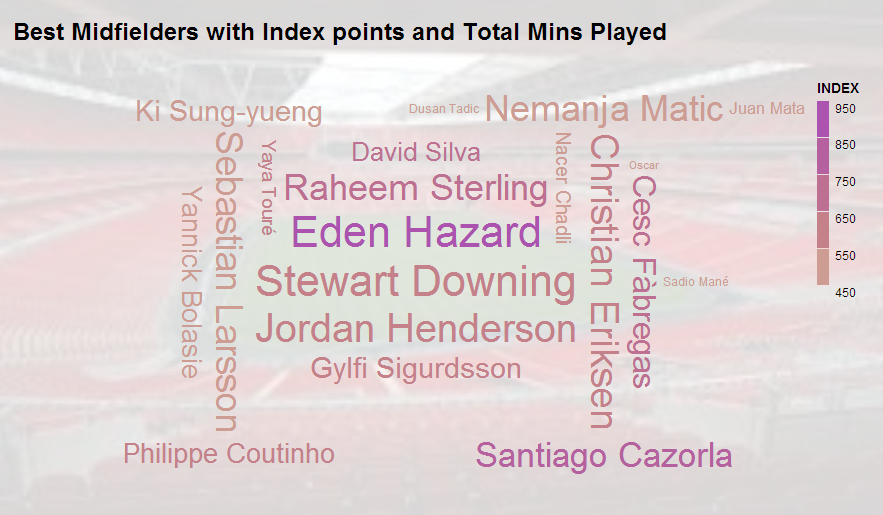 This analysis presents the top defenders on the basis of index points and total minutes played. Chelsea has the best defence by a long distance; the top 2 defenders are from Chelsea. This supports the earlier findings that a strong defence enabled Chelsea to clinch the title. Interestingly Aaron Cresswell from West Ham has the maximum total minutes played and is third in terms of index points. West Ham finished 12th in spite of top individual performances in midfield and defence, perhaps a better performance by their forwards would have placed them better. 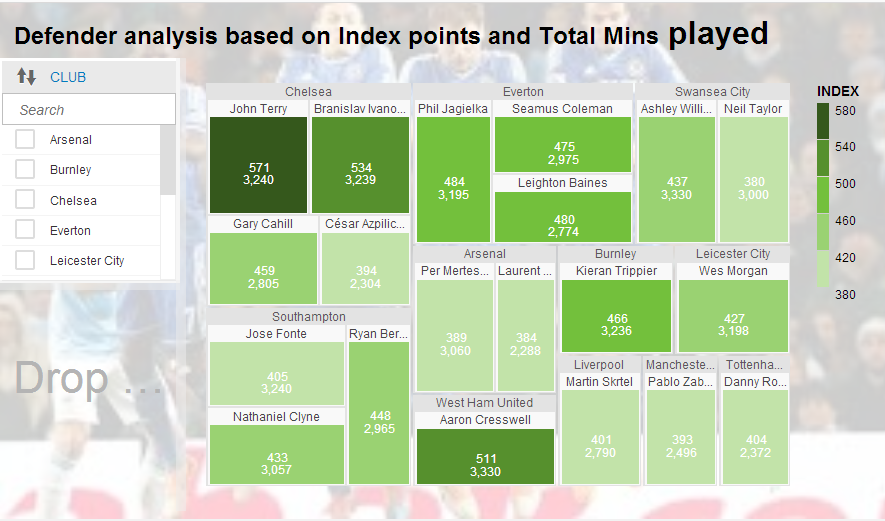 The Radar Chart below compares goalkeepers on the basis of index points and total minutes played. The Manchester United goalkeeper David de Gea stands out as the best followed by Man City’s Joe Hart. Interestingly Swansea’s Fabianski comes in third best. This coupled with the fact that Swansea’s midfield and defense performed well, seems to suggest that the forwards let them down. This also shows up in the previous analyses because Swansea was eight overall but 11th in terms of total number of goals scored. Chelsea’ Caurtois scores good index points which is expected, given that Chelsea ended up at the top. 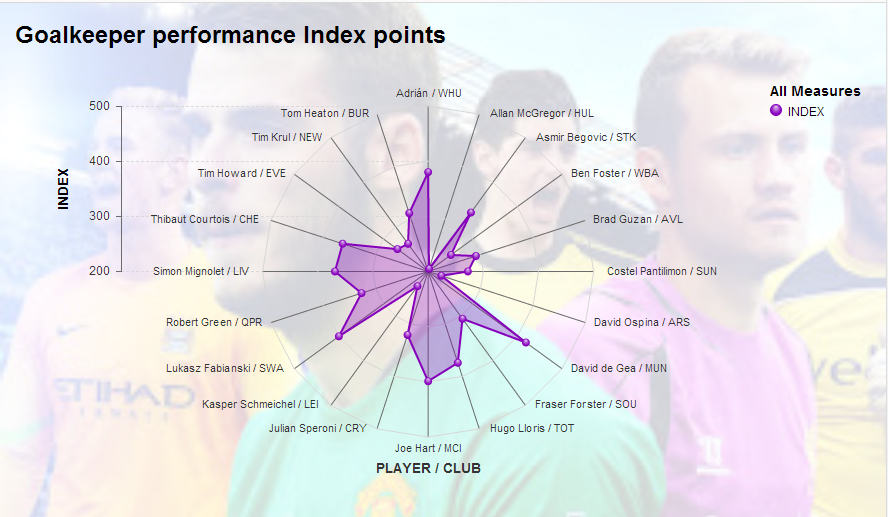 Player Index: EA Sports English Primer League is providing Index points for players based on their position, suppose if are taking Goal Keepers we can take these things in consideration, like how many minutes did he played in Home and Away, How many Goals did he saved like that.

Note: All data and images are from English Primer League Website.