On Friday, June 26, The Supreme Court of the United States ruled that same-gender marriage is right nationwide, joining approximately 20 other countries in liberalizing marriage laws.

This past weekend SAP marched for the first time in the 45th San Francisco LGBT Pride parade. I was part of the 300 person contingent that represented all five SAP Silicon Valley campuses. The mood was decidedly celebratory. Epically so. Estimates put attendees in the millions.

Pride@SAP, a global LGBT employee network, showed their pride around the world. SAP Berlin marched for the first time in the Berlin Christopher Street Day Parade on June 27. Over 60 people participated and rode on the SAP float. 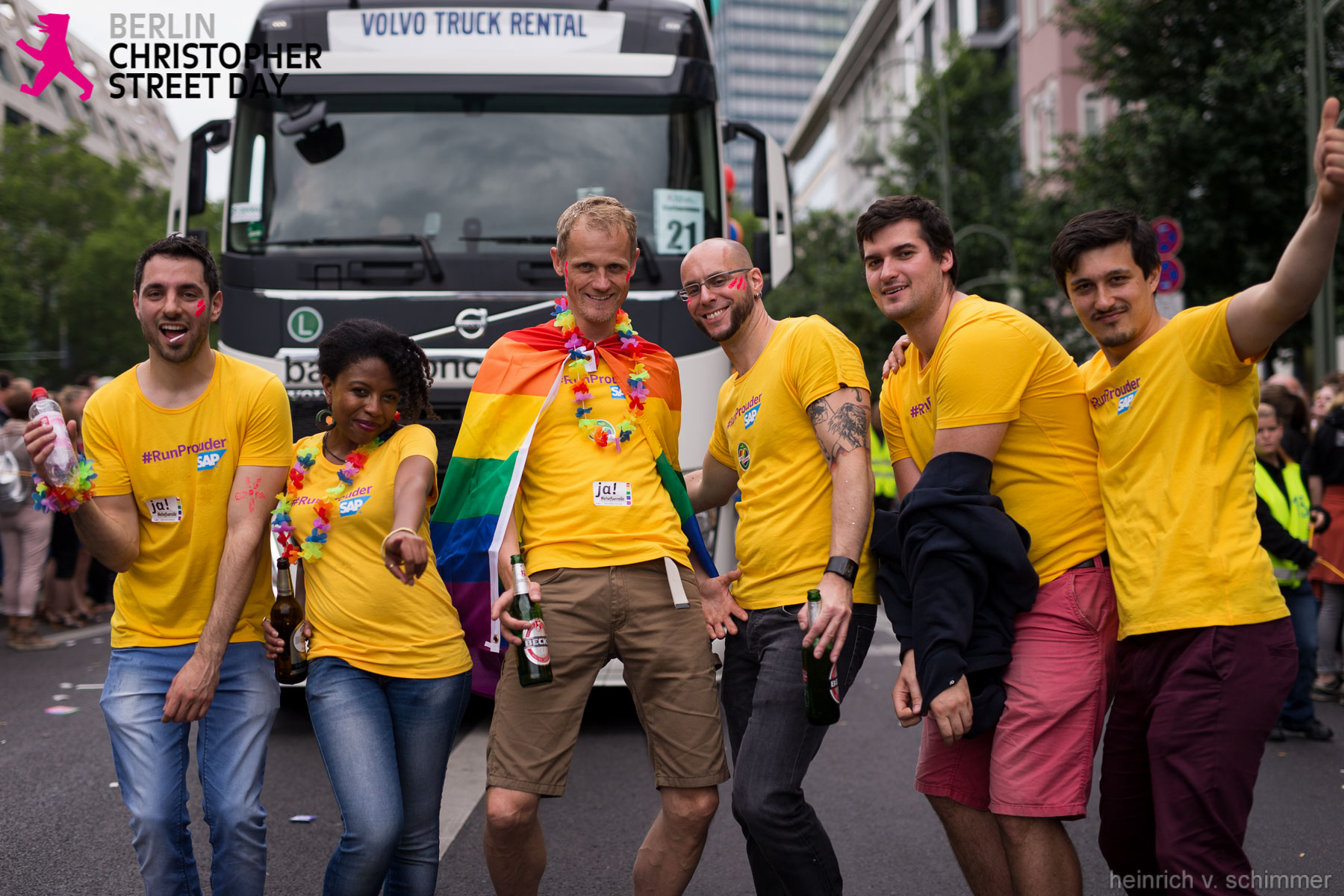 Why are so many companies participating? And why has SAP decided to invest so much globally this year? Quite simply, diversity is good for business.

Moya Watson, HANA Cloud Platform Product Manager, is co-lead of Pride@SAP North America. She marched with her parents by her side – her wife and their daughter at home preparing for the after party.

She pointed out that the Supreme Court ruling, “is important for businesses because in the United States there has been a patchwork of inconsistent marriage laws. To figure out the benefits according to each state’s laws previously cost the private sector approximately $1.3 billion per year.

She added, “It’s also still legal to get fired for being gay in approximately 28 states and transgender in 31.”

Jenny Dearborn is SAP’s Chief Learning Officer and the newly-appointed global executive sponsor for Pride@SAP. She said, “SAP’s growth depends on our ability to innovate. And Innovation depends on bringing different perspectives to the workplace.”

“That’s why SAP is a huge advocate of diversity. For people to do their best, they need to be able to be their true selves. Supporting our LGBT colleagues is critical to creating that environment. If everyone thrives, then SAP thrives too.”

The San Francisco march was also an important way to unify the five campuses SAP Silicon Valley campuses. Just a few years, SAP’s presence in Silicon Valley was limited to Palo Alto. But through the acquisitions of Sybase, SuccessFactors, Concur and Ariba it now include over 4,000 employees and five cities.

George Teixeira, Senior Analyst Relations Manager, organized SAP’s participation in the San Francisco march and talks about why SAP Silicon Valley got involved this year. “We’ve acquired quite a few local companies in the past few years and this was a great event to bring those campuses together, while uniting people to support SAP’s LGBT employees.”

He continued, “Also a lot of companies in Silicon Valley have become very active in the parade and we want to show that we’re committed to diversity. We appreciate diversity and know the benefits it brings to the workplace, which helps solidify our reputation as an employer of choice.” 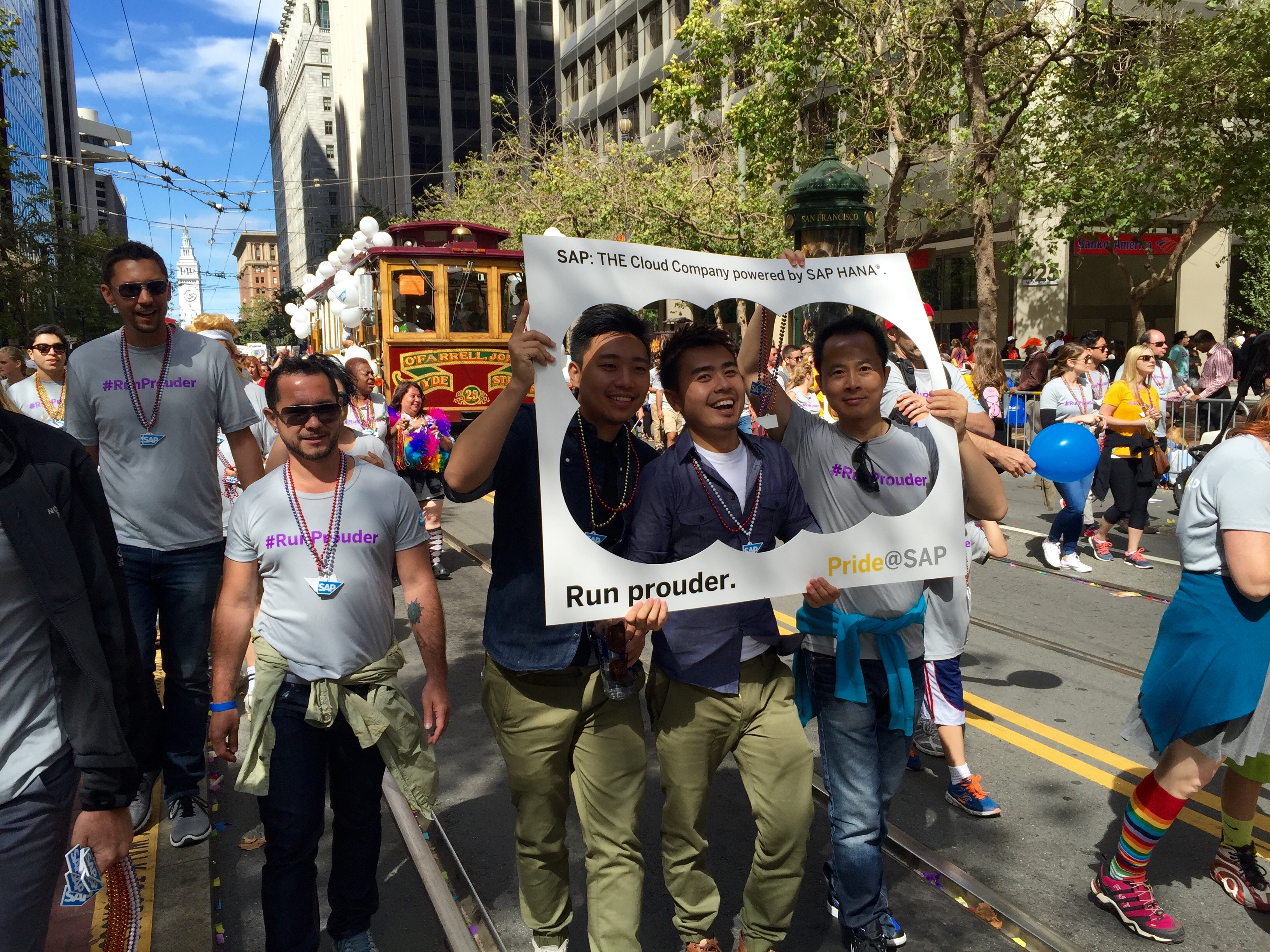 Somewhere Over the Rainbow

But things weren’t always like this at SAP. Pride@SAP started as a network called Global HomoSAPiens in Waldorf in 2001 and grew slowly as a grassroots movement.

“It was really quiet – we didn’t even have domestic partner benefits when I started in 2001. But things really gained momentum in 2010 and 2012,” said Watson.

In 2010, SAP got a perfect score in the Corporate Equality Index, created by the Human Rights Campaign, a group that promotes LGBT welfare in the United States. This ranking galvanized the Silicon Valley Pride@SAP team, according to Watson.

Then in 2012, SAP produced a video to support the It Gets Better Project, created to stem the rash of suicides amongst LGBT youth. Pride@SAP was prompted to participate when the son of an SAP executive took his life after years of homophobic bullying. The team put together a video featuring openly LGBT SAP employees, and hosted a series of events on campus to raise awareness.

As Teixeira says about Pride@SAP, “This is not just about LGBT people. It’s also about parents, friends and relatives of people that are part of the LGBT community.

This past spring SAP signed on to the Business Coalition for Workplace Fairness and its Employment Non-Discrimination Act (ENDA), which would make it illegal to discriminate on the basis of sexual orientation or gender identity in the United States.

“We’ve made a lot of leaps. People who’ve not been accepting are now evolving and SAP is also evolving to embrace all people and all diversity. SAP is a place where I don’t have to worry.”

I am proud to work at a company like SAP!

Having spent years marveling at the power of commitment and incredible advocacy demonstrated and  illustrated by folks like Moya Watson  I can vouch for the fact that SAP is fortunate indeed to have such passionate change agents as employees .

I am very grateful to have had the opportunity to work with Henning Schmitz on organizing, coordinating and managing SAP's involvement in Berlin's Christopher Street Day pride parade.  The event was a huge success - especially as we collaborated closely with our SanFran colleagues to make a larger, global impact.  Obama's decision was just icing on the cake! equaldignityforall  lovewins  Thanks to the Global Diversity team, for seeing the value added in supporting this event.  diversitysparksinnovation runprouder

This is one business trend we all should be proud to embrace. Kudos to Moya Watson for her relentless efforts.

Couldn't be happier about the court rule, especially since my home state of North Taxolina was getting shamefully behind the rest of modern civilization. I just wish other countries (yes, looking at you, Russia!) could get their heads out of you know where and join the reality.

"North Taxolina"!   I'm sure there are a lot of good people in North Taxolina too - and good people who fall on the other side of the issue, with strongly held convictions.  I hope they evolve to learn that their convictions and these issues are not at odds.