I’ve marched in a few LGBT Pride Parades over the years, and have volunteered many times for Sydney Gay & Lesbian Mardi Gras when I lived in Australia. Now, having been resident in San Francisco since my transfer to Palo Alto in 2014 I jumped at the opportunity to participate in one of the oldest and largest Pride events in the world.  When Pride@SAP, our internal LGBT network received the official go-ahead to participate in the San Francisco LGBT Pride Parade for the first time I was excited to be able to join colleagues and celebrate under the SAP banner and #RunProuder.

A huge amount of effort was put in by the organizers at Pride@SAP to ensure that this was a fun and successful day. I volunteered, along with my husband, to be a Contingent Monitor (we had to ensure everyone had a safe and happy time). The US Supreme Court ruling on marriage equality, announced on the eve of Pride weekend, meant the merriment was amplified by this major improvement of the rights and freedoms of LGBT people everywhere – the stage was set for an amazing Pride weekend ahead.

On the morning of the Parade, at the assembly area, the ‘Cable Car’ on wheels was decked out in SAP banners, balloons and sound system – everyone was smiling and were keen to get going – eventually our turn came and we marched on to Market Street to huge cheers and support from the crowds. It was an amazing experience getting carried along by the energy of the spectators and the enthusiasm of the SAP contingent, full of smiles and fun. It was fantastic to march with my LGBT colleagues and our allies – and great to see how diverse and inclusive SAP is, and has always been for the 20+ years I have worked here. It was wonderful to #RunProuder with Pride@SAP. 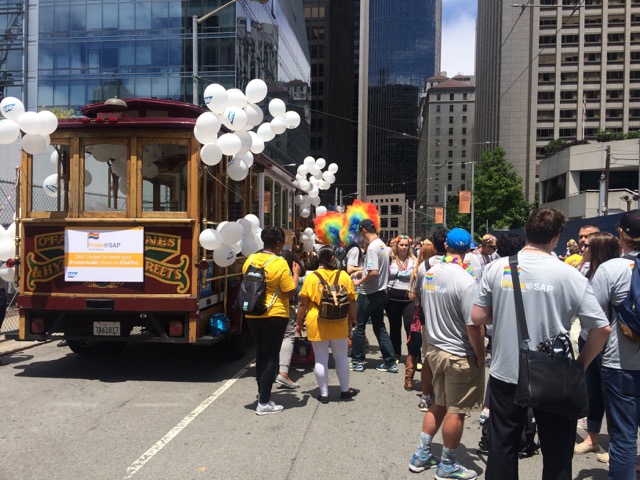 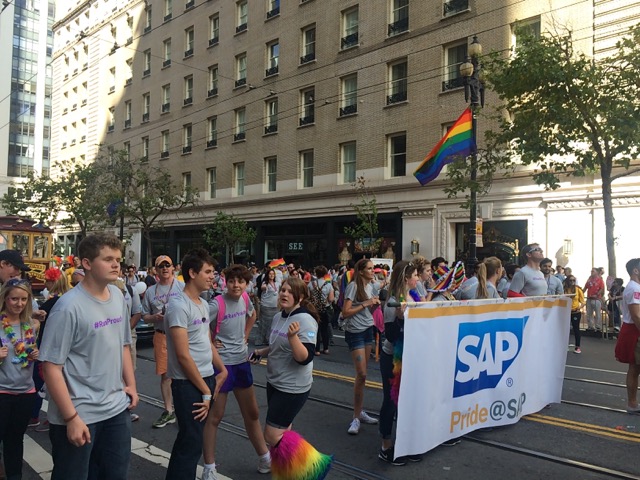 Thanks so much for all of your help and support, Nick! And thanks for keeping us safe!

Thank YOU Erica for the work that you and all the team put in to making it a wonderful day for all. The success was written in the smile and joy that was so evident throughout the day. I'm already looking forward to next year 🙂

Awesome that you were there Nick! Thanks for capturing what the day was like!