At this year’s Enactus France National Competition, the dedicated students, faculty, executives and staff involved in the program had much to celebrate: in the 2014-15 year, 1,280 active students from 47 universities completed 107 entrepreneurial projects in France and abroad. Through 124,000 volunteer hours, they made a significant impact on the lives of 4,900 people. Watch their great year in review video here.

The event, which took place on 2-3 June at Cité Internationale Universitaire de Paris, brought together 469 supporters, all eager to find out which of the 20 competing teams would be named National Champion and have the chance to compete for the global title at the Enactus World Cup this October.

SAP Foundation partner Enactus France since 2013, presented the trophy to the winner of the semifinal pool at the National Competition Enactus France, Wednesday, June 3, 2015 at the Cité Internationale Universitaire de Paris. 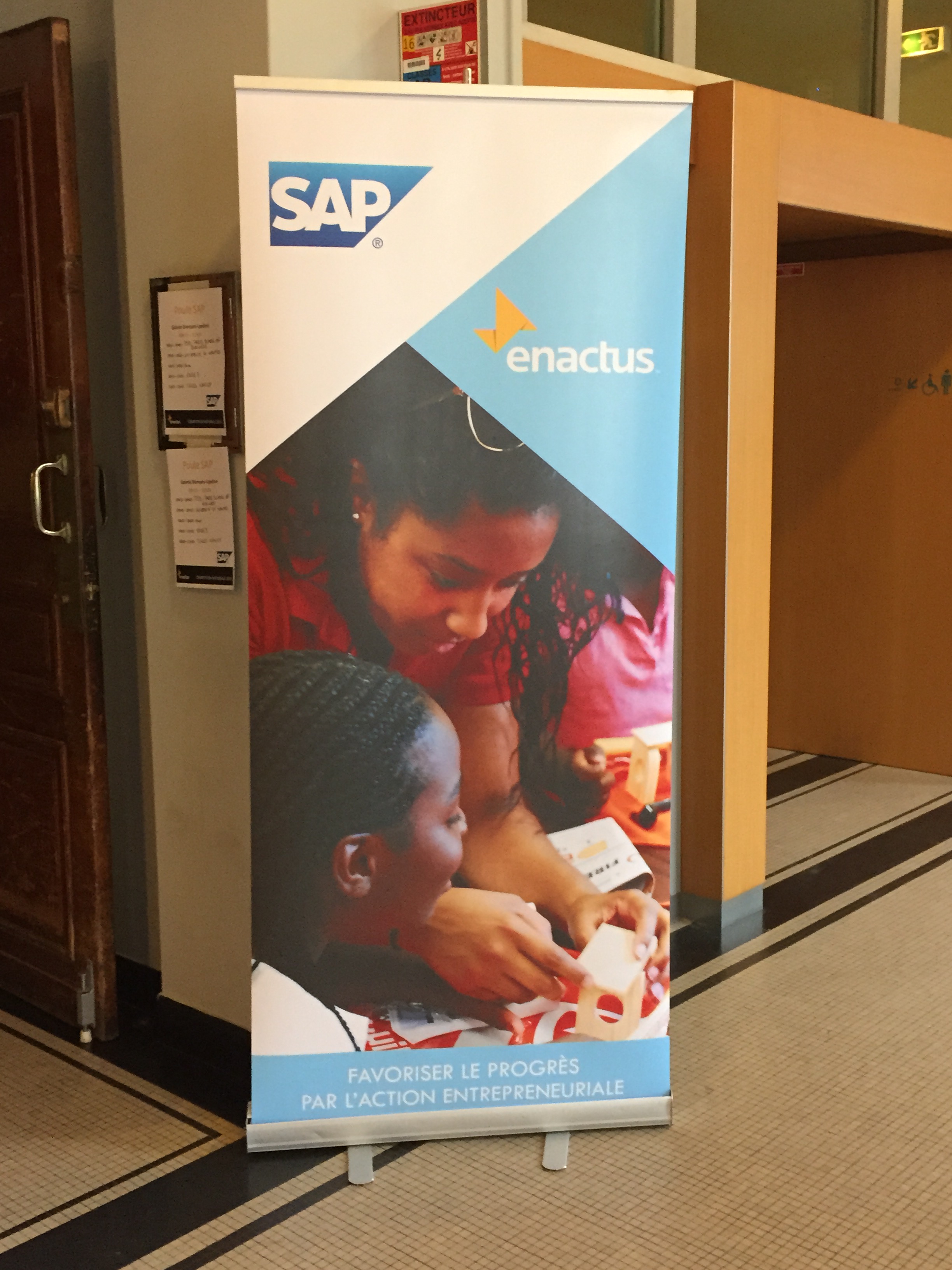 One of the 5 semifinal pools of 4 teams each has been sponsored by SAP and animated by Alexandra Darras, SAP University Alliances Country Manager.
The team Enactus Nancy Mines had the chance to wear his project in the final against 3 other winners.

This is Orlando Appell, Delivery & Custommer Satisfaction Director for SAP France & Belux who handed them the trophy. “There were in the SAP pool a wide variety of schools both in their nature and geographic presence, this diversity is extremely rewarding.”

It is with their ReSOS project team won the semi-finalists trophy. 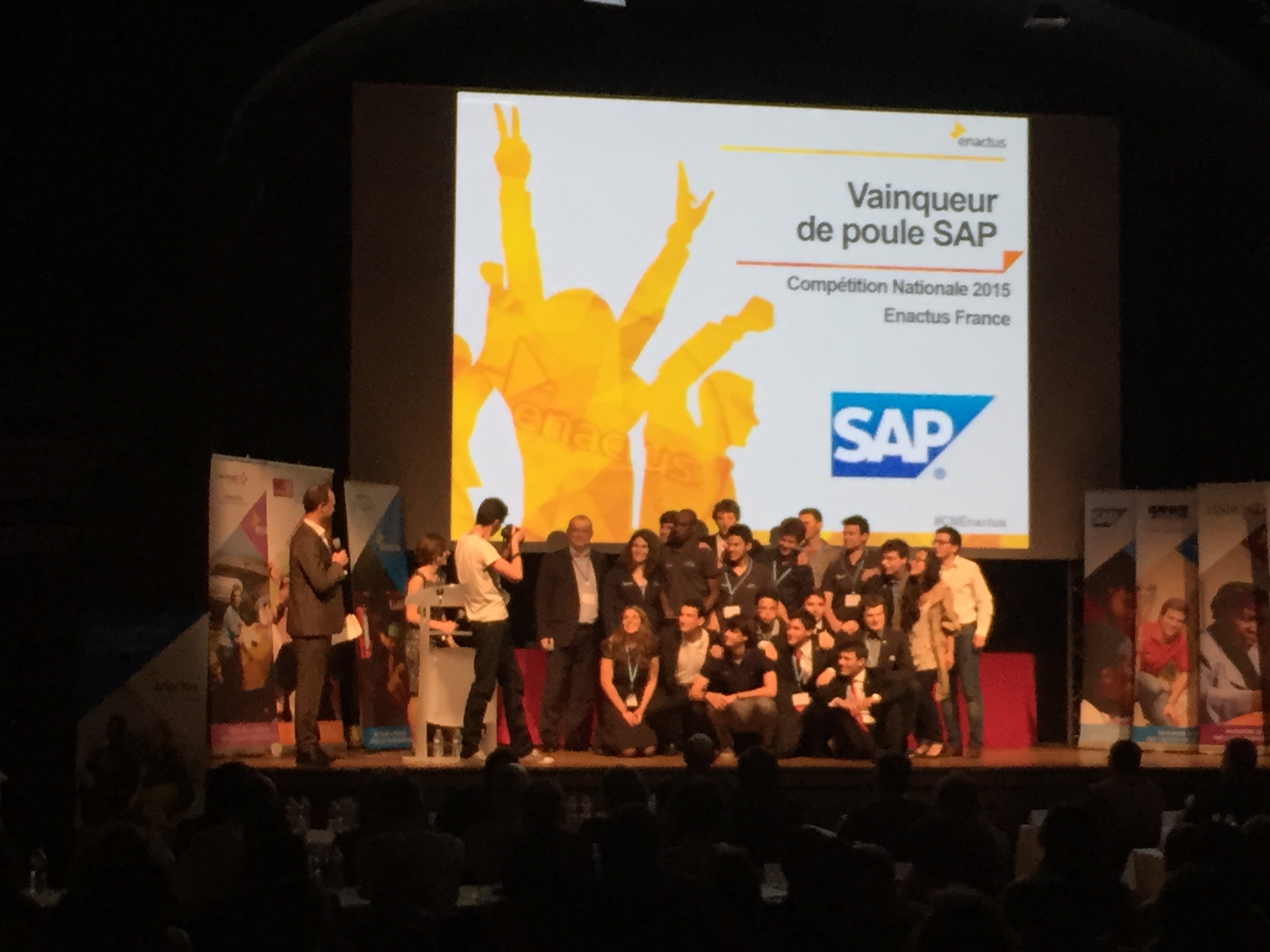 ReSOS The project aims to promote the social reintegration of people in difficulty through workshops for making cardboard furniture, convey skills useful in
everyday life and create social links, promote self-esteem. The team holds training workshops for making cardboard furniture for residential and social reintegration and allows a first step towards the professionalization of very marginalized. This furniture can be sold later.

5 people in difficulties have been involved in the workshops since the beginning of the project.

The team Enactus Nancy Mines will have the chance to be welcomed into SAP to spend a day with the management team.

In the first round of competition, 112 executives serving as judges narrowed down the field to the final four teams, who presented on the main stage to 34 final round judges. In the end, it was the team from NEOMA Business School – Campus Reims who came out on top, impressing judges with their work developing a clothing company for individuals with physical disabilities.

The team connected with an individual named Amendi, he himself a paraplegic who understood the challenges posed by conventional clothing to both individuals with physical disabilities and their caregivers. He had an idea of designing and producing fashionable, comfortable and elegant clothes for disabled individuals of all ages…but lacked the skills needed to do so. The team helped him develop a coherent business plan, supported him in fund development, found local production support and eventually launched his online business. Check out this great article that showcases the team and their work. 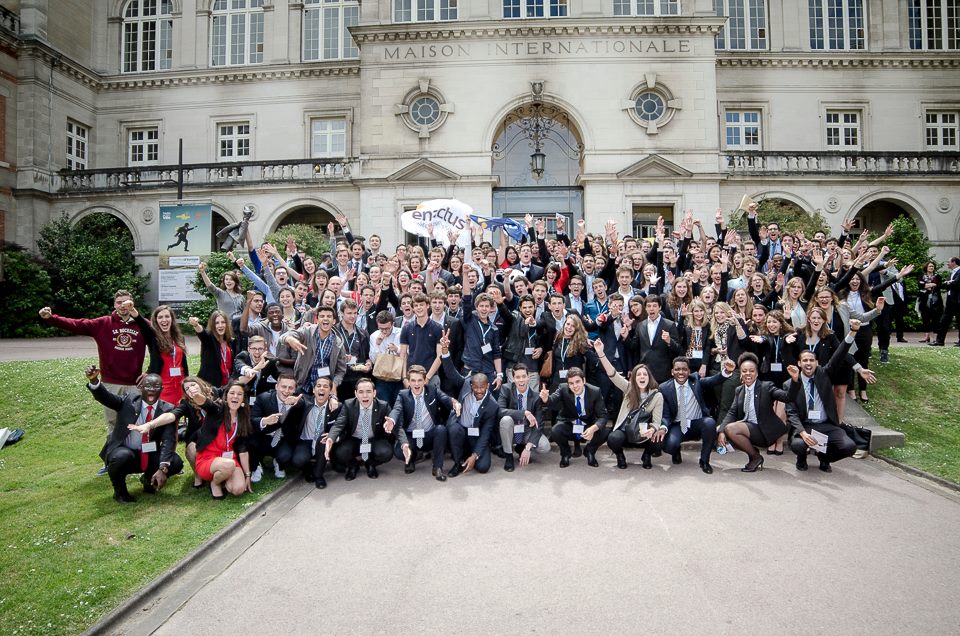