Today was SAP Inside Track Washington DC and it was sold out:

This was the first time an Inside Track for Washington DC was sold out.  This was also the first time it was promoted with the ASUG Virginia Chapter.  This resulted in representatives attending from organizations such as Boeing, DLA, USDA and more. 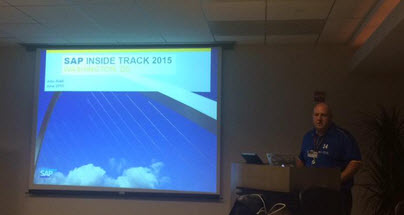 John is pictured to the left.  John worked very hard for this.

She said they have 14K sales reps using Cloud For Customer (C4C) for lead generation, opportunity management, upstream, down stream processing.  With this, they have seen a “40% reduction in clicks to create an opportunity”

SAP is largest C4C customer globally with 14M business partners; Nespresso has 4M business partners.  SAP has almost 900K opportunities in Cloud for Customer.   They have high usage with 3K active users with 100% uptime in May and June.  C4C runs on iWatch 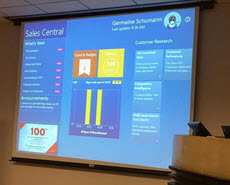 Apple iWatch has deal room on iWatch.  Germaine said they see less use of iPads, more with smart phones

Next, SAP’s Lauren Pluschke presented UX and Design for the Enterprise.  She covered Fiori Design Principles which are role-based; not design just for super users.  They want them to be “delightful”, to enrich work experience, “coherent” with consistent interaction, simple, do your job quickly, and responsive  work how and where you want

Lauren also covered Fiori Like applications  experience is the same.  Both Germaine and Lauren covered Sales Central which is built on an Windows 8 application.  Lauren she said they featured 12 apple watch apps at SAPPHIRE

Lauren said this was one of the first times she presented and she did a great job.  SAP Inside Track is a great place to first present and try out presentations. 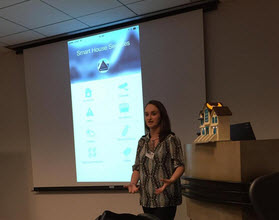 In her first example, a “Mr. Smith” has an expensive art room, one of his kids opens a window, with humid air blowing in.  Using sensors, an alarm goes off, with an alert on phone.  They can call emergency contact (through the phone)

The last session before the hands-on session was with Njål Stabell who flew across the country to present on HCPms with a UI5 Neptune App.  His live demos worked.  Please check his SCN content here.

See this wiki for the complete list of sessions.  I want to thank John again, speakers, and attendees. Thank you SAP Press and IBC for sponsoring

Great recap Tammy! I wonder if John Astill would be interested in making his iot presentation at sitcarib  😉   ...still looking for more speakers...

Hi Raquel - you can always ask John - he is an amazing person, a super nice guy who does so much for the SAP Community.

Thanks Tammy! Will do.