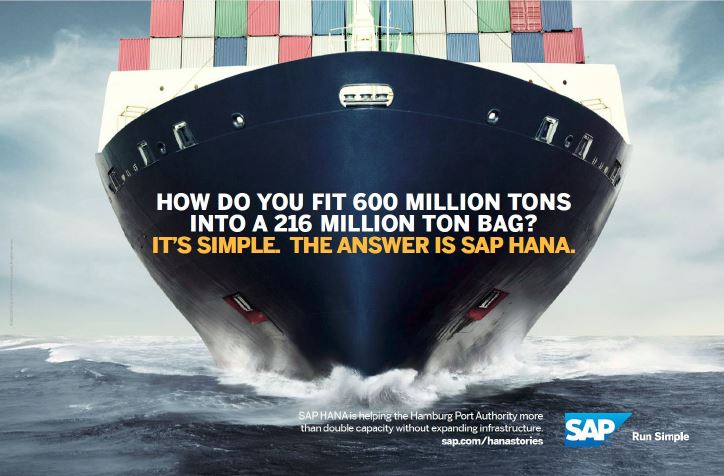 Chances are the tea or coffee you drank this morning arrived here by sea – along with millions of tonnes of other cargo. It’s crowded out there on the waves. Consumer demand is steadily increasing cargo volumes every year. The knock on effect is growing congestion at shipping ports – a big problem that’s getting bigger. Whilst capacity is increasing year on year, the physical size of a port stays the same. And herein lies the conundrum. How do you grow when you can’t get any bigger?  Simple.  Let me give you an example.

The Port of Hamburg is the third largest of Germany’s inland ports. It has the largest railway port in Europe, is the second largest European port for container handling and the third largest for sea cargo. Some industry watchers predict the city itself may soon become the world’s first Seatropolis. The port handles nine million containers a year, which is forecast to jump to a whopping 25 million within in the next decade – almost treble its current capacity. That means more traffic on the roads, rail, and waterways into and around the port where space is already at a premium, and more importantly, a looming problem for the Hamburg Port Authority (HPA), which manages the infrastructure.

So how did they tackle the problem? Less space, more innovation. Their smartPORT logistics platform based on SAP HANA and HANA Cloud Platform, is capable of connecting all the disjointed participants at the port. By collecting complex information about traffic inside the port area (think closed bridges, congestion at terminals, available parking spaces for trucks et al), the system simultaneously shares it with carriers, truck drivers and stakeholders in a simple format, personalised for their specific routes.

For example, individual drivers are told which route to choose, how long they need to wait at their destination, and companies know when to prepare containers for collection.  If a container ship is behind schedule, the HPA can direct affected trucks straight to a holding area, rather than leaving them to block the roads. And when a container ship approaches, the HPA knows how high a bridge needs to open and for how long it needs to be raised for based on the size of each individual ship.

This means that opening times for bridges can be reduced from a static 20 minutes down to just that needed for the passing ships to clear it, often only a few minutes. This not only reduces power consumption for bridge operation, but also reduces disruption for both the 8,000 trucks and the significant local traffic that daily use Hamburg’s 177 bridges.

Likewise, the HPA can project where a ship will be at certain times as it progresses through the port based on its speed and destination to ensure there is adequate sea space, berth and terminal capacity. (These spatial predictions have been so successful that this approach has been adopted by the German national football team for game strategy).

The result is a complete 24×7 port-wide nervous system, providing visibility into all traffic conditions with real-time updates pushed out to mobile devices and port signage systems.  Increase in cargo handling has doubled, and the time savings for trucks equates to 5,000 hours per day over 40,000 trips. The HPA’s entire infrastructure resides in the cloud, and delivers smooth traffic flow into and out of the port. The Port of Hamburg is 7,200 hectares and isn’t getting an inch bigger. Thanks to cloud-based innovation it doesn’t have to. It’s now got the ability to grow in capacity, rather than physical size.

One of the things I like most about this example is that the majority of disparate parties involved don’t have a direct business relationship with each other, let alone any communication. Yet in the near future, pilot boats, ships, truck drivers, incident management personnel, and the vessel traffic services centre will soon be exchanging data in real time. The more partners that participate, the more effectively the port will run.  And as their system develops, it has the potential to communicate vital details, such as what each the container consists of and how heavy a load is.

This, in my view, is how hyper-connected IT is making entire ecosystems more intelligent, more efficient and more productive – not through complexity, but through simplicity. There’s a video on this at: