The 2015 Manufacturing Industries Forum kicked off with Industry workshops on Tuesday, June 23rd at the Westin Lombard Yorktown Center in Chicago. Over 600 leaders in manufacturing have come together from around the world for this three-day event to share ideas and showcase solutions. With the need to reduce complexity more important than ever, the goal for the forum is empowering manufacturing transformation.  And as the shutters opened to let in the Chicago morning sunlight onto the Industry 4.0 Showcase, the tone was immediately set and you could almost hear an audible click in the connected manufacturing mind.

The sentiment echoed throughout the day was that the data companies receive through IoT can help them re-imagine the customer experience and offerings.

Wednesday morning’s keynote was titled Simplify to Innovate – Relentless Pursuit of Excellence in Manufacturing Industries and it centered on how to reinvent the core of a business. Martin Mrugal, Chief Innovation Officer, SAP America, provided an informative presentation on doing things never thought before possible. “Innovation is going to become faster and faster and faster,” said Mrugal “and we need to move with it.”

He added that to remain competitive, manufacturers need to fit into a world that’s comprised of Big Data, Internet of Things (IoT), Cloud, Mobility, Social Media, and Omni-channel Commerce, apart from the traditional challenge of pursuing excellence in developing and delivering world class products.  He challenged attendees to imagine being able to combine the networking capabilities of LinkedIn, Facebook, Uber and Airbnb all at once. “The asset intelligence network is similar in that it’s a network to bring together business partners,” said Mrugal, who believes that manufacturers can accomplish similar networking benefits with the right systems in place.

Bob Parker, who is responsible for the research direction at IDC, delivered a keynote titled IDC benchmark report Internet of Things – Emerging Trends and Use Cases where he focused on smart manufacturing. “Remember the 3 D’s. Manufacturers need to be Demand Oriented, Data Driven and Digitally Executed,” said Parker. The IDC study that he referenced presents an overview of the industry –specific and cross-industry IoT use cases that together are used to build the U.S and worldwide IoT forecasts.  “The manufacturing industry is already the number one user of IoT apps,” said Parker. He also stated that the next generation of supply chain will be digitally executed.

Next up was Michael Lynch, Global Co-Lead, Internet of Things at SAP whose keynote was titled Harnessing the Internet of Things and Industry 4.0. IoT is also known as the 4th Industrial Revolution and Lynch promised that it will completely transform manufacturing, as we know it today. “It won’t only be sensors, RFID, and iBeacons that companies of the future will use to streamline production processes. The future will see end-to-end connectivity and visibility across full supplier networks, supply chains, warehousing and in fact all of the way until the consumer makes a purchase and consumes the item,” said Lynch. Echoing the connected theme of the event, he reminded attendees that connecting info, people and things is strategic to long-term success. Lynch also stated that although there is no single IoT company, SAP has the most comprehensive IoT portfolio to drive business value. 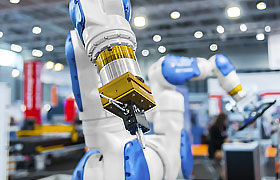 Paul Wellman is the CIO at the Tennant Company and he spoke next. Tennant is widely considered the innovation leader in the cleaning solutions industry. Wellman pointed out that the company actually began to implement IoT back in 2005, and today they already have 5,000 connected machines. “We empower our customers with data insights to reduce their cost to clean.”  Wellman also stated that data from machines drives everything from productivity to product design to enhanced customer service.

In the afternoon there were dozens of breakout sessions. In one, Gisele Roy, Director Global Planning, Blount International discussed how they embarked on a mission to optimize inventory investments and production capacity. Roy shared their SAP S&OP/IBP on SAP HANA story and provided first-hand insight on how to prepare for an IBP implementation.  She added that, “Through IBP we all live in one place.”

As the networking reception began in late afternoon, excitement was already building for day three at the SAP Manufacturing Industries Forum in Chicago.

Check out the Day 1 and Day 2 presentations for yourself by clicking here.