Minimize the number of LSMW programs to load SAP projects

LSMW is free and simple to use and handles many things more or less automatically.

In this and other blogs I want to share some of my experiences from recent projects. I am not a programmer so any ABAP code that I show will not necessarily be the best that could be used. However, data migration is a one-off so it usually isn’t important if the code is beautiful and efficient (unless of course you have very large data volumes). I am assuming that you are already familiar with LSMW. If you are a beginner then there are plenty of other SCN posts that will help you.

How many LSMW programs to create a SAP project?

There is no standard SAP program, IDOC or BAPI available for the creation of a SAP project and its WBS elements, so recordings have to be used. The project builder transaction CJ20N is an “Enjoy Transaction” and is therefore not recordable.

The common approach is therefore to use CJ01 to create a project header and then to use CJ02 to add WBS elements. The question that then arises is how many recording and how many LSMW programs to use.

I adopted the classic approach of first creating the project header in LSMW and then separately adding the WBS elements.

The problem with adding WBS elements is the positioning of the cursor. The elements are added in a table and with an LSMW recording you can’t reposition the cursor with program code. Typically when adding records to a table, you need as a minimum to have a recording to add the first element and a recording to add subsequent elements. For WBS elements you only need these two recordings if you set them up correctly. These two recordings can be combined into a single LSMW program.

The reason that I am writing this blog is that I have seen examples with 3 or 4 separate recordings and LSMW programs being used and this seems unnecessarily complicated to me.

So, in order to add WBS elements to the projects created by a previous LSMW program, you need two recordings of CJ02:

Both recordings are included in a single LSMW program. In LSMW on the Maintain Object Attributes screen use the More Recordings button on the line where you add the recording. In the pop-up box you can then add extra recordings: 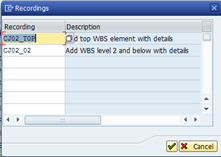 The “top” recording to add the first WBS element is straightforward. Here are some example screen shots: 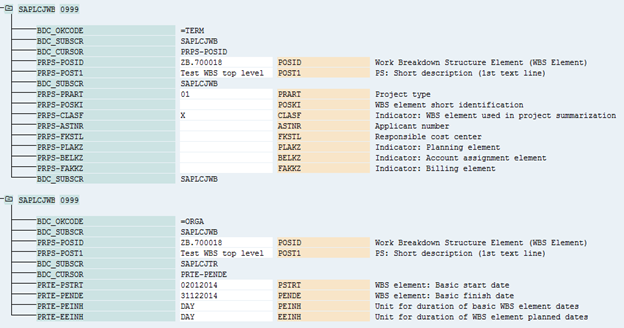 The second CJ02 recording is what gives the most trouble. The way to set it up is as follows:

You now need to be a little bit careful with the assignment of field names to the recording. You can use the “default all” button but you must then change some of the field names afterwards. The reason is that POSID on the initial screen is the parent WBS but on subsequent screens it is the WBS that you are adding. You should also be aware that in the separate recording to add the top WBS element, POSID is consistently the WBS that you are adding.

The actual field names that you use don’t really matter as long as you are consistent. In my LSMW I also had some help fields as follows:

and in the recordings I used the same convention.

Here are some example screen shots of the recording:

After defining the recordings you need to define the input file. The input file for the program should be sorted into the sequence of the WBS elements:

The remaining input fields will of course depend on the attributes being used.

Since multiple recordings are being used, we need some ABAP code in the BEGIN_OF_TRANSACTION block:

In my case all of the project types used had the same mask for the WBS structure, so it was fairly easy to code.

We also decided to determine in the LSMW program the values of the operative indicators using logical rules based on the project type. 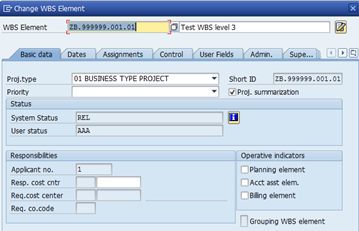 The LSMW was also designed to handle multiple project types where the attributes that need to be filled (and sometimes their values) differ per project type. In the BEGIN_OF_TRANSACTION block the project profile was retrieved from table PROJ. This can then be used in the coding per field of the recordings. The input file was included the full set of attributes that might be used. In the spreadsheet that users used to provide the input, it was indicated which columns where needed per project type.

When set up correctly you only need 3 recordings and two LSMW programs to create projects and WBS elements. This is easier to manage during data migration.