The War on “Self-service” – Postscript & Post-mortem!

Last week I attended the excellent SAP Insider event in Nice. On the final day of the conference I delivered my own presentation “The Battle to Define and Deliver Self-service” detailing the progress made to enable self-service capabilities on a large global BI deployment that I’ve worked on for nearly five years.

By the end of the presentation the audience in the room were unsurprised, or even in agreement, when I stated that I’d had a “Morpheus” moment and was now taking this to it’s logical conclusion, actually killing off the term self-service! Because this wasn’t a slide but something I thought of as we were talking, directly after finishing I composed and posted the following (tongue-in-cheek) tweet: 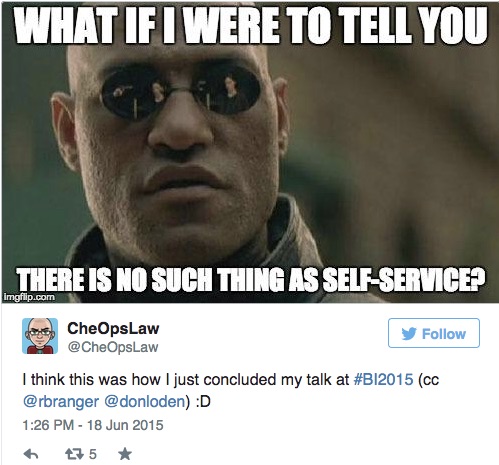 Without the context of the presentation (and accompanying discussion with the audience) more than few people misinterpreted what I was saying (or missed the joke) and therefore I thought it was worth taking the time to document how I (along with what I felt was the majority of the audience) arrived at this conclusion.

The presentation originated from (and expanded on) a two year old blog-post I wrote here on SCN: The War on “Self-service”. In that post I argued that “self-service” was not “a thing” but “something optionally done by a thing” i.e. that Lumira was not self-service in it’s own right (and that is how it was being marketed) but a data visualization tool that could be used by IT to deliver a BI document or, optionally, delivered in such a way that end users could modify/create/share their own documents. In short, I argued, self-service is not something you deliver (because it is a capability/verb) and instead something you optionally enable in something you deliver (something tangible like a product/noun). The original post was unremarkable but attracted some very interesting comments including this fantastic response from Donald MacCormick of Antivia (and formerly Vice President for Strategy, BI Platform at SAP) which broadly supported my case.

The presentation I delivered at SAP Insider described the current landscape two years later with our implementation of self-service capability built into IT delivered BI. The major topics were:

I’m going to walk through just the relevant slides to explain what led to the “Morpheus” statement. At a very simple level we have been deploying a global ERP and BI deployment. replacing regional BI with BEx reporting. 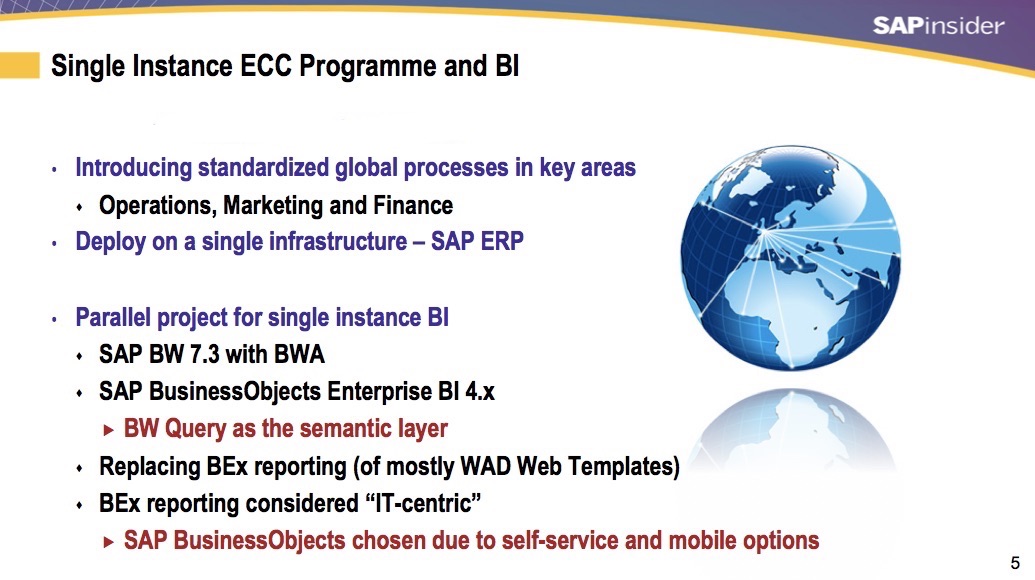 One of the visions was to remove the barrier to adoption that was the creation of change requests to IT every time someone wanted even a minor change in a BI report. We wanted to enable analysts/consumers/superusers to easily modify the flexibly built reports and save personal or team variants.

Early on, because the term self-service is ambiguous, therefore open to everyone having their own opinion on what it is (a large part of the problem obviously), we defined what we intended to enable within the scope of this project so that we could share this with the people who matter most, the people who use it. 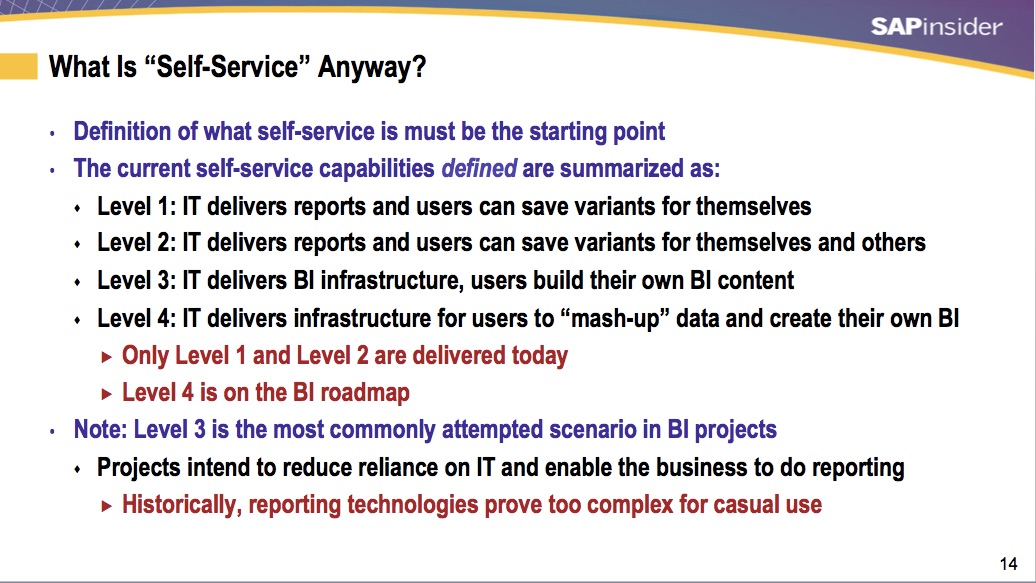 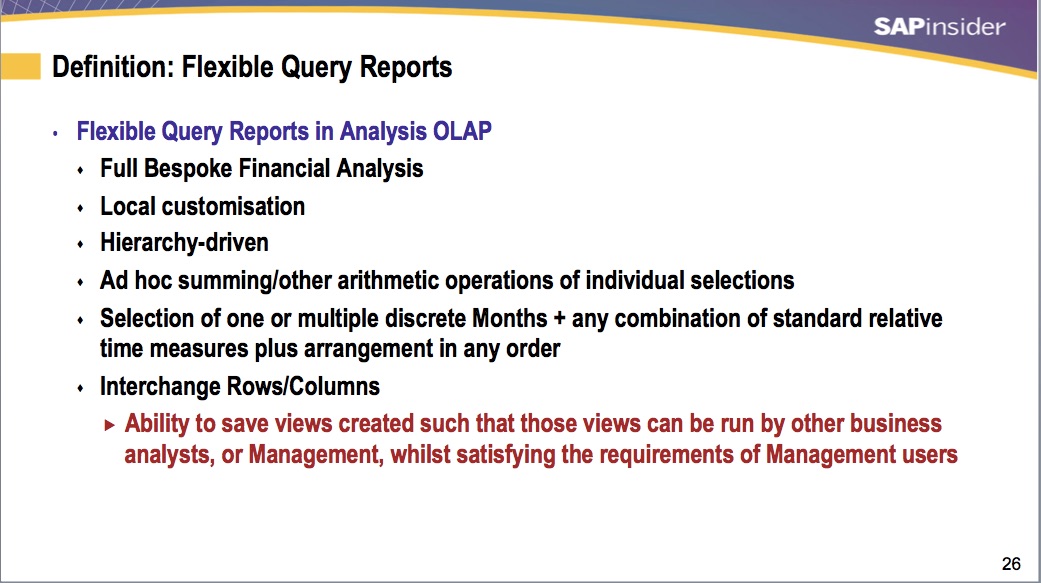 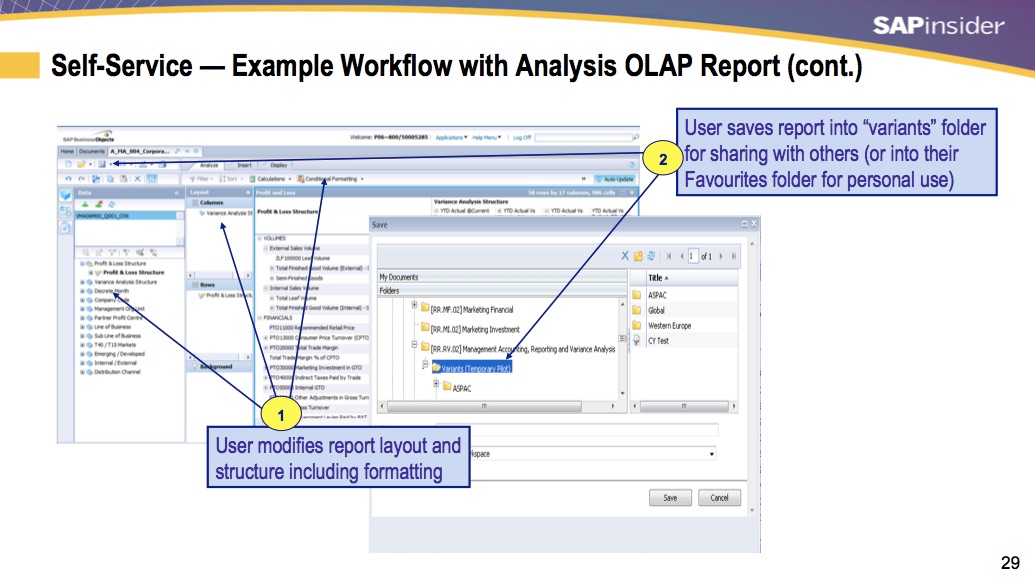 These types of self-service enabled reports were already deployed in production, however when we played this capability back to the BI user community a senior (exec) and BI champion was asked what his expectation was from self-service. His answer wasn’t quite what we expected. 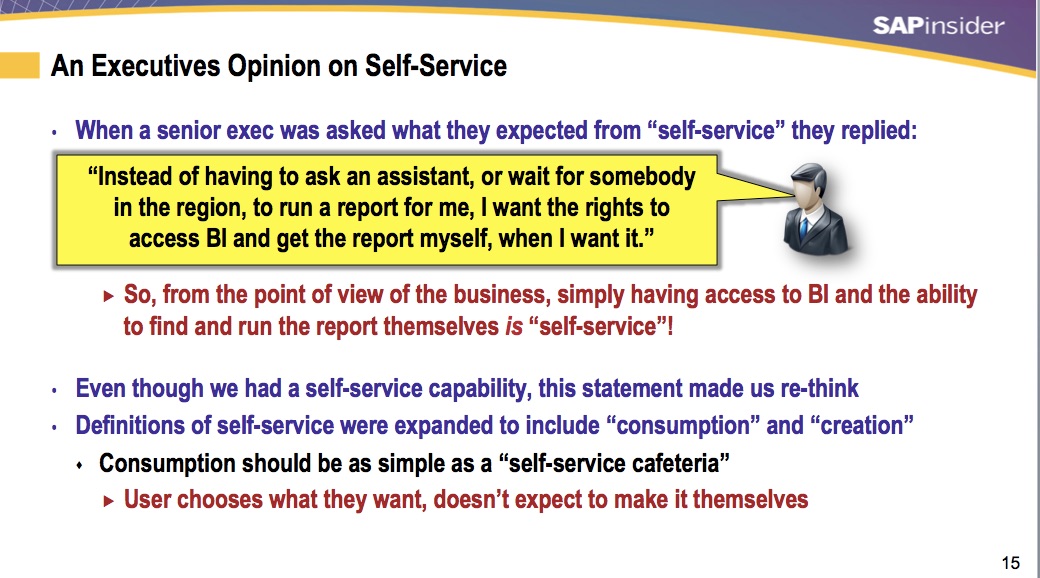 Pausing on this slide for a while I confirmed the statement the exec made which was “I get fed up waiting for someone to run a report for me, self-service means access to the BI system and being able to get the report myself”. I then asked if anyone in the room would have considered this to be “self-service” and most agreed with me that we would consider this simply using the report. I took this a step further and asked if “printing the report” once it had been run would be self-service, again no, simply “use” of the report.

Well, I asked, what if the user ran the report and then swapped a couple of columns around and then printed it? What if they adjusted the formatting and type of charts then saved a variant copy in the BI platform to share with other users? Isn’t this all simply “using” the report? What if, un-satisfied with this particular report, a new report from the same source was created, isn’t that ultimately simply “using” the product?

As most people seemed to agree that everything we had just talked about as being “self-service” was simply some of the many ways of using the system then actually it wasn’t simply that self-service was not a “thing” in its own right, it wasn’t a thing at all. It doesn’t exist! That’s when Morpheus entered the room and offered us the red pill… Of course that isn’t all there is to say (and that’s a fraction of the content we covered) but hopefully it’s enough for people to think twice when offered the blue pill of self-service! 😉

Excellent (and very funny) article. I have to admit that it was funnier when you shared the story with me face to face in the pub the other night 🙂

That's because I couldn't front-load this post with three bottles of IPA! 😉