Skateboards, Skullcandy, and the First Day of Summer 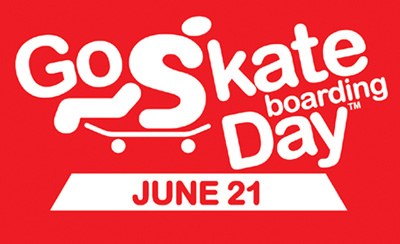 What do these three things have in common? The 12th annual celebration of Go Skateboarding Day of course! June 21st is not only the start of summer, but also the official holiday of skateboarding.

Go Skateboarding Day was founded by the International Association of Skateboard Companies as a few informal parties near the beach where it all started in Southern California. Today skaters will gather from coast to coast and across continents as they create what has come to be known as “the grind heard around the world.”

The day’s true purpose is for skateboarders the world over to create some adrenaline and demonstrate that skateboarding continues to be an art form – an expression of rebellion and personal freedom. The summer solstice will see personally-created skateboarding events and traditions occurring well into the night of the longest day of the year.

From skate shops to hand rails, old friendships will be solidified and new ones created in a loose-knit rebellion. Skateboarders will refuse to be encased in cars and cubicles, and instead make films, break rules, and innovate on their path to a creative and successful future.

A great example of a company with roots in the same magnificent paradox that is skateboarding is Utah-based Skullcandy. The maker of audio headphones with attitude is all about an extreme fusion of music, fashion, and action sports lifestyles.

Skullcandy’s growth was so rapid that they quickly required greater technology for running the IT half-pipe.  Running the SAP Business ByDesign solution, Skullcandy has a system beautiful in its simplicity that supports the company’s daily business and minimizes IT time and effort.

“We partnered with SAP to transform our business. Now we can better manage our time, information, accounts, inventory, everything we have as we grow.”

The Skullcandy brand and logo embody the company’s tagline: Every revolution needs a soundtrack. And for many Go Skateboard Day revelers, their own personally inspiring soundtrack will be heard on these headphones with attitude. The Skullcandy Skate Team includes some of skateboarding’s biggest names, and the company remains committed to the art form.

Skateboarding has always brought individuals from disparate backgrounds together to a common place as they use what makes them unique as a reflective surface. On this day, individuals across a multiplicity of languages and cultures will interact in a way that draws out authentic performances and good times.

So be sure to tell a friend and celebrate the holiday on the first day of summer. It’s the perfect opportunity to grab a board, take to the air and land on both feet!