Karl Benz, who sold the first modern automobile in 1886, would recognize its descendants on the road today. They’re sleeker, faster, quieter, and (thank goodness) not open to the elements, but they’re still four wheels and an engine, with a person behind the steering wheel. Almost 130 years later, though, what we think of as a car is about to change dramatically. We’re on the verge of having cars that do the driving — and the navigating, and a lot more — for us. 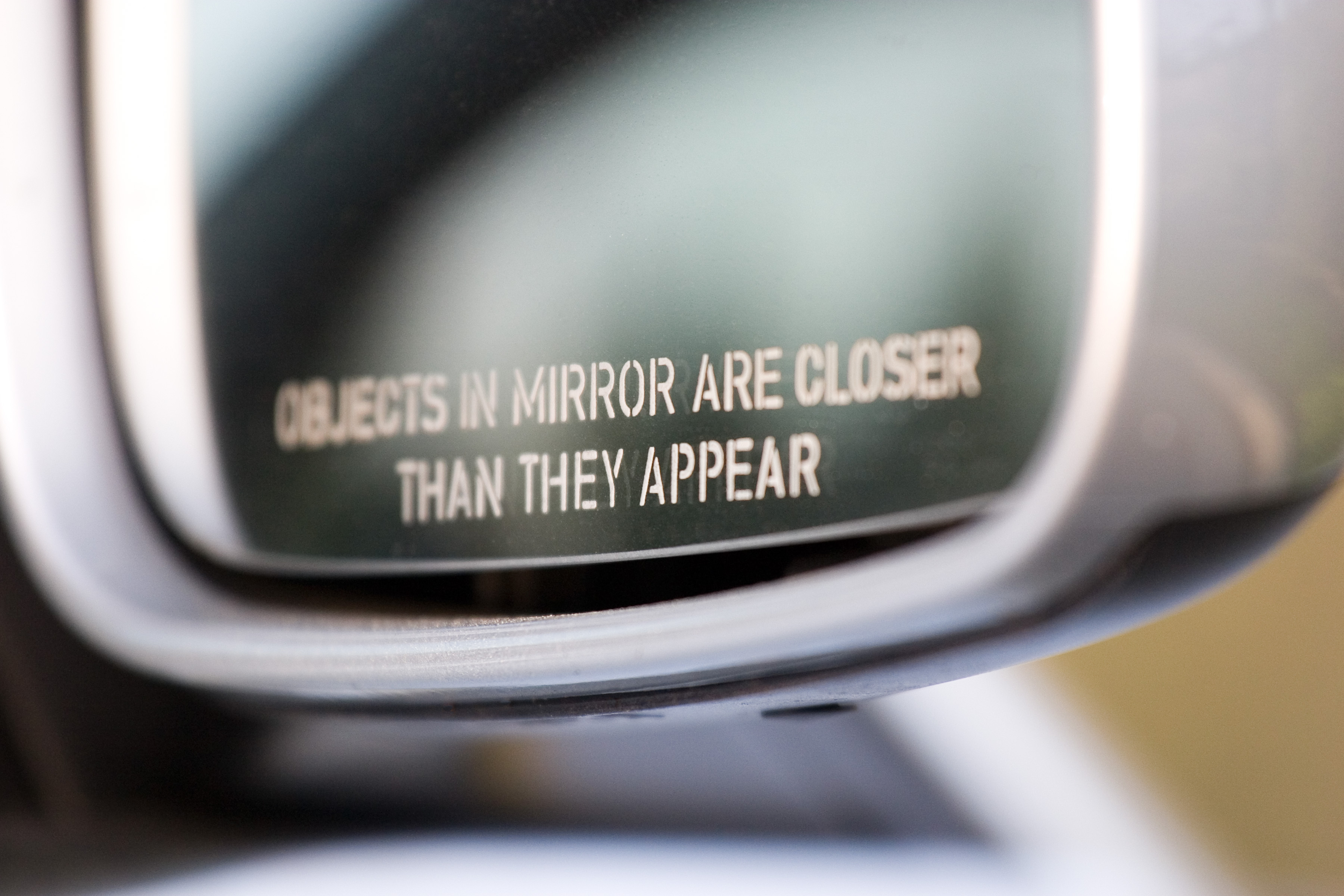 LIDAR, radar, cameras, sensors, mapping and navigational software, and all the other technologies necessary to create a basically functional autonomous car already exist. Right now, they add only $8,000 to $10,000 to the base price of a vehicle, a figure that will inevitably drop as the technology continues to develop on an exponential slope that’s turning vertical. Google has been testing driverless cars since 2009. BMW, Audi, Tesla, and many others are developing their own versions. You’re likely to see completely self-driving cars in dealerships within the next five years, first in luxury models, and then at every level.

Automating what’s now under the control of fallible and reckless human drivers will make cars safer and more fuel-efficient while freeing people to do other things in the time they once spent driving. Morgan Stanley estimates the avoided accidents, fuel costs, and productivity gains will save $1.3 trillion a year in the US alone — an amount equal to 8 percent of the country’s current GDP. Given the potential impact of returning that much money to the economy, self-driving cars may well become the norm, if not mandatory, in many places.

At the very least, this will upend so-called “car culture.” When cars with human drivers are allowed on public roads only under certain circumstances (or not at all), even today’s rusty clunkers might become coveted collectibles driven under special licenses or in limited areas. In daily life, people who identify strongly with their cars and love to drive may, however grudgingly, learn to love the autonomous automobile. On the other hand, they might balk.

Car culture is just one of many areas in which the prospect of self-driving cars creates multiple, sometimes conflicting scenarios. They will affect almost every industry and alter many parts of modern life we currently take for granted.

We can’t predict exactly how the self-driving car will change society, but we can imagine quite a few changes that might occur, both good and bad.

Where we live – When a long commute is just another opportunity to relax or work, suburbanization and sprawl might increase. Yet autonomous cars could also make dense urban areas more appealing and livable by reducing traffic, eliminating parking problems, and offering an efficient alternative to fixed-route mass transit.

Car ownership patterns – People who currently rely on public transportation might choose to buy a car that can find the fastest routes and best parking spaces on its own. On the other hand, Adam Jonas of Morgan Stanley points out that most cars are only in use 4 percent of the time. Car ownership could collapse if owners could use one car for many purposes — for example, going to work, then sending the car home on its own to pick up your kids — or if a readily available pool of shared drone cars lets many people give up ownership altogether.

Automotive design – Cars will look different when they no longer need to accommodate a human driver. They may be smaller, lighter, and faster, with fewer lights and more passenger space. With more cars traveling faster in greater proximity with fewer accidents, roads will change, too.

Economic fallout – When people no longer need to concentrate on driving, they’ll be able to work and play in their cars instead. This opens up enormous new employment and revenue opportunities as automakers, OEMs, and content providers fight to deliver audio, video, apps, and other content as well as the hardware to access it. On the other hand, jobs that currently require human drivers may wither away like buggy whip makers after the birth of the Model T.

Aging – On-demand access to self-driving cars will be a tremendous boon for people who cannot drive, particularly the elderly. Studies show that 79 percent of seniors age 65 and older live in car-dependent suburban and rural communities, and that once seniors stop driving, they make significantly fewer trips to the doctor, to shops and restaurants, and to visit friends and family.

Safety – Google reported that its test vehicles were involved in only 12 accidents between 2009 and early 2015 — all of them the fault of other drivers. Nonetheless, self-driving cars will need to be programmed for outlier scenarios and ethical dilemmas, like choosing between hitting a pedestrian or swerving into oncoming traffic. They will also need to include an option for manual control or programming overrides in situations such as bad weather that interferes with navigation technology or the need to race to the nearest hospital.

Liability – The insurance industry will eventually solve the question of who pays for damages — the company that made the car, the software driving it, or the sensor that failed to detect a risk — in an accident involving automated vehicles. What’s unclear is whether the potential for enormous damages will increase, since companies have deeper pockets than individuals, and the effect this might have on insurance rates.

The automotive industry – The automotive business model will face unprecedented shifts. The total number of cars owned and/or in existence, for example, will depend on whether people continue to own cars individually or adopt a car-sharing model. Additionally, software that manages everything from navigation to acceleration to entertainment (far more than the human driver does today) will make up as much as 40 percent of a car’s total value.

Autonomous cars will generate and communicate vast amounts of location and activity data about themselves and their passengers: frequent routes, map and data updates, traffic data and forecasts, reservations for parking or a particularly busy road, signals between vehicles, content being created and consumed, and much, much more.  Every company that makes, manages, or uses a vehicle needs to start thinking now about how they will use this data, who will control it, and who will have access to it. The robust, scalable technology necessary to process, analyze, and protect all this data needs to be in place well before it starts flooding in.

Turns and Curves Ahead

Whether you own a car or not, whether you work in the automotive industry or not, these changes will affect you in ways both small and profound. The time to prepare is now.

Download Issue No. 02: Where Will the Self-Driving Car Take Us? 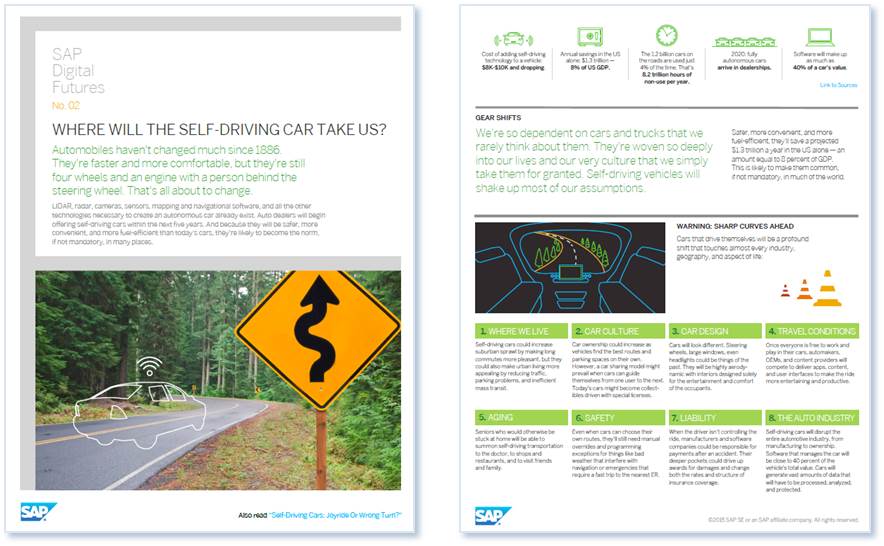 To learn more about how exponential technology will affect business and life, go to SAP Digital Futures