How to Display Unit/Currency as Separate column in BEx Analyzer

In SCN community, noticed few people asking how to display unit as separate column instead of behind the value. Initial I thought its quite complex as we have only two options.

However after thinking, got one more instant solution, we can derive currency/unit as separate column in query output by adding one extra FORMULA in BEx designer level. 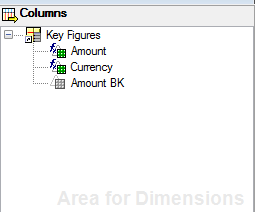 As I said its not permanent solution, because in above screenshot currency column act as key figure even though it has alpha values, it just tricky way of separating currency as in different column just for looking not for anything else and it does not support filter and other options, if business users required to provide selections/filters , I recommend select any one of two options which are discussed in this blog above.

Thanks for reading this blog.