SAP progressively developed high-tech centers around the globe to deliver edge innovation, create dynamic collaborations with local ecosystem, and access top-quality resources. SAP Labs France is one of these locations, which successfully internationalized and broadened its development organization to get talented employees and become a valued key player on the market.

Between 1998 and today, SAP Labs in France developed their diversity and culture of innovation through organic growth and several acquisitions. With around 900 employees of 30 different nationalities, located in Sophia-Antipolis, in Caen and in Paris, SAP Labs in France are part of the most important centers of expertise in Europe, accompanying companies’ transformation into the digital world.

First center having been created, SAP Labs France SAS focuses on areas such as Security & Trust, and Business Intelligence. Research and advanced development teams brought innovation in security services for the Cloud, data protection enforcement, contextual business intelligence, novel visualization and interaction paradigms. Additionally, the role of SAP Services & Support has grown steadily, with a focus on the French market and the SAP Solution Manager solution. By acquiring Highdeal in 2009, SAP Labs France also became the nest of SAP’s convergent charging solutions. With the acquisition of Sybase France in 2011, SAP Labs France has further reinforced its strengths in design and development: the SAP Sybase PowerDesigner is the industry-leading business process / data modeling software and metadata management solution for data architecture, information architecture and enterprise architecture. Additional industry-leading companies coming from global acquisition enlarged the SAP family in France. That includes BProcess in 2011, Ariba in 2012 and Hybris Software in 2013.

Other recent acquisitions by SAP

SAP Labs in France are a unique combination of Talents, Ecosystem and Market that embraces diversity and culture of innovation.

Furthermore the diverse teams that are part of SAP Labs in France, one important aspect is the pioneering and innovative spirit that exists within the entity.

As innovation needs time, a specific program called “the InnoDays” has been set up in 2013. InnoDays give a great opportunity to the developers to innovate without constrains, as well as to work on new topics and to think “out of the box”. The concept is simple: developers would have to set-up cross-teams and to develop a simple product i.e. one feature in one week. At the end, a jury of experts elects the winners according to 4 different criteria: the degree of innovation, the utility for the business, the quality of the presentation and, of course, the final result of the product. This event enabled knowledge transfer and ‘out-of-the-box’ creativity.

In a few months, the SAP Labs in France will launch another collaborative space dedicated to innovation where developers & searchers can set up creative software-hardware projects, share knowledge and passion. It is so called “D-shop”, open during working hours and fully equipped with high-tech material such as 3D printer, Google Gass, Raspberry Pi, Drones and many other toys! More info to come soon!

Nowadays, SAP Labs in France makes a point of encouraging workforce diversity and inclusion; in fact, no matter their cultural and business background, all SAP employees are invited to hold high the flag of the culture of innovation. 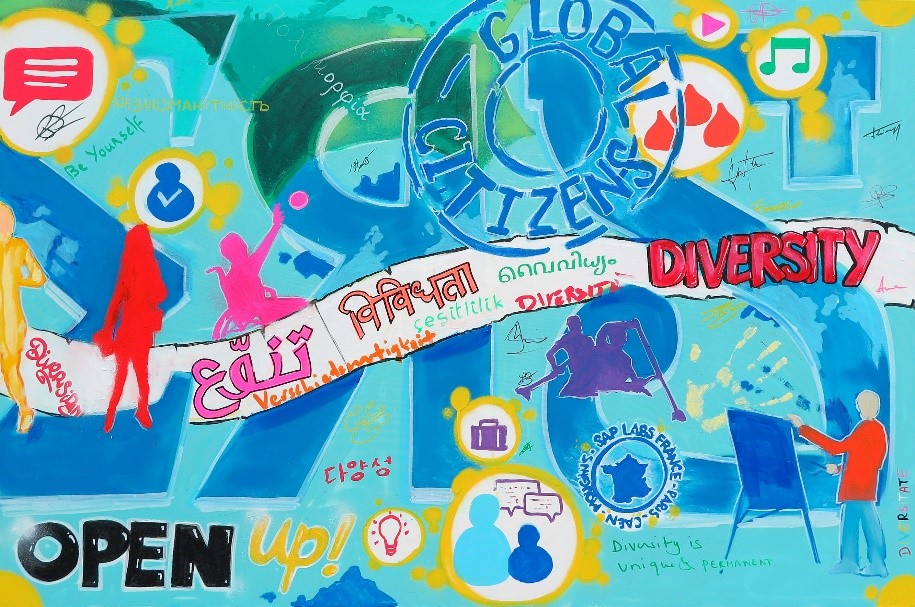 Hmmm Caen is in "Basse-Normandie" not in "Bretagne" 😉

And Sophia-Antipolis is not in Fréjus as the mini-map would have it. Great article though, thanks Gwendoline!

Good eyes Fergus for distinguishing it with this distance and this sun! 🙂

Thank you Jean for notified us.