In the OData world, operations are performed on the entityset by invoking a combination of HTTP methods, query string parameters and / or an XML body.  For example, the BUSINESSPARTNER entityset can support query, read, create, update and delete operations.  Because the query, read, create, update and delete operations are common for all entitysets, it makes sense to have a base class (EntityCollection) that implements all these methods.  Also, for migration purposes we can create a protocol with optional methods found in the MBO Object API (for example, findAll, findBy etc.). BUSINESSPARTNER and other entitysets can optionally implement these methods. 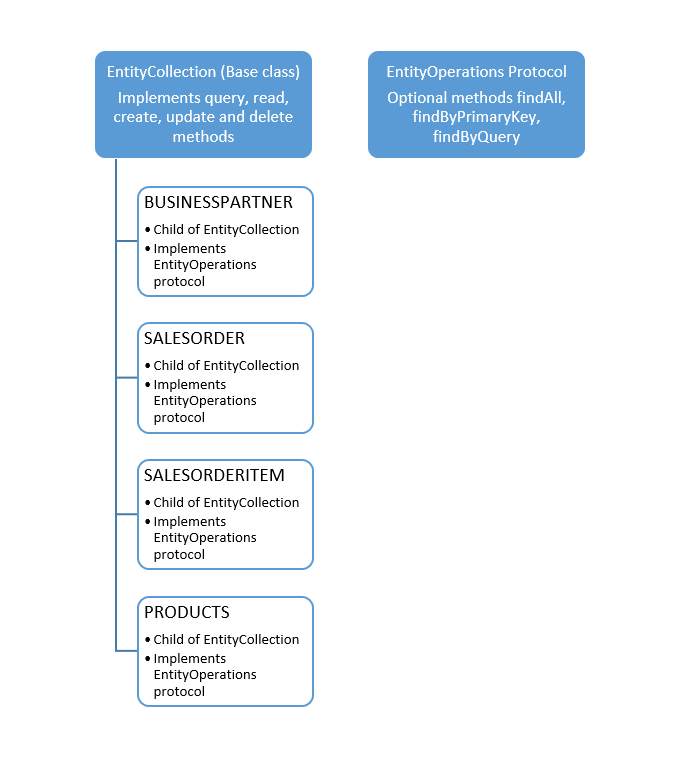 There are a couple of ways to optimize read operations in the harmonized OData SDK.  When implementing the findAll, findByPrimarykey, findByQuery etc. methods on an entityset, it is best to store the resultset during success callback to a variable.  This in-memory representation of the OData entityset can then be accessed anytime from anywhere in the sample application.  This works best when the resultset is not extremely large.

In the MBO Object API, simply calling findAll on the parent MBO is enough to read the corresponding child MBOs as well.  For example, the following findAll method reads data from the parent BusinessPartner MBO.

BusinessPartner MBO has a property that holds all the child SalesOrder MBOs.

The approach to reading child entitysets is different in the harmonized OData SDK.  While you can adopt a similar approach using the $expand clause in harmonized OData SDK, parsing the resultset and even passing the query parameter is a little confusing.  So, it’s easier to simply execute a separate call to read the child entitysets.  The ultralite database which acts as the OData producer on the device allows read operations on all the entitysets – even if it’s actually not possible on the backend OData Service.

As mentioned earlier, the read operation in MBO Object API returns a SUPObjectList object.  The item at a given index can then easily be retrieved and cast to the MBO object itself.  The properties of the MBO object can then be bound to UI controls.

However, the read operation in harmonized OData SDK returns an id<SODataEntitySet> object.  The item at a given index can then easily be retrieved.  The properties of the id<SODataEntity> object can then be retrieved by knowing the attribute name and can be bound to UI controls.

MBO Object API supports custom SQL queries that can be directly executed against the local database. Since there is no explicit relationship between sales order items and products defined, we use a custom SQL query to join the tables and retrieve the data to be displayed.

Unless there is a navigation property built between the 2 entitysets, we cannot use the $expand option in OData.  In this case, we may only be able to select attributes that are available in the Product entityset and not the attributes available in SalesOrderItems.

I have attached a sample application that reads data from the local database using the steps outlined above.  Please let me know if you have any questions.

Our next step in the migration process is to perform CUD operations against the local Offline Store.