In the MBO world (depending on SUP version and device platform), you either have a local ultralite or SQLite database residing on the device.  The data from the backend EIS system is staged (or cached) in the consolidated database (CDB).  This data is then synchronized with the local database residing on the device.  All CRUD operations are performed on the local database.  So in a sense, all native MBO based applications have offline capability. When it comes to migrating MBO based application to an OData based application using the harmonized SDK, there is an implicit mapping of the offline capability inherent in MBO world to the Offline Store concept in the OData world.  Unless absolutely required by business needs, I do not recommend using both Online Store and Offline Store within the same application.  In fact for all migration needs, I strongly recommend only using the Offline Store to achieve similar functionality.

In our migration example, we have the following synchronization groups. 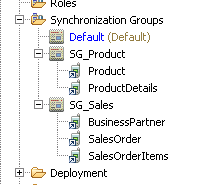 This corresponds to creating 2 defining requests in our OData mobile application.

Note that the $expand option is used to retrieve all the related entities in BusinessPartner, SalesOrders and SalesOrderItems.

In the OData application, the load parameters and sync parameters can be specified as query filters in the defining request.  Here we see how the BusinessPartner is filtered based on Country eq ‘US’.

In some cases, the user may want data from a different country for some reason (for example, user goes on a business trip to Europe).  There is not an elegant solution to this in the OData SDK.  The current workaround is to recreate the Offline Store.

Similar to the central logon handler class that was used for on-boarding a device, it is recommended to create a class that handles Offline Store functionality.  This class must implement methods to open the Offline Store and be able to flush and refresh the Offline Store.  A static variable of type SODataOfflineStore is also declared that can be used in various parts of the program using a getStore class method.

The getStore class method simply returns the static variable STORE to be used in various parts of the program.

The UI can be updated based on the various callback methods that are associated with the protocols for opening the Offline Store, flushing and refreshing contents of Offline Store.

As mentioned earlier, the class that handles the Offline Store functionality must implement methods to open the store and perform flush and refresh.  Since all these operations are asynchronous in nature, the class must also handle the success and error callbacks.

In addition, use an application configuration file to configure OData endpoints and defining requests that determine the data that populates the application database when it is created.

I have attached a sample application that opens the Offline Store and performs flush and refresh using the steps outlined above.  Please let me know if you have any questions.

Our next step in the migration process is querying the data.