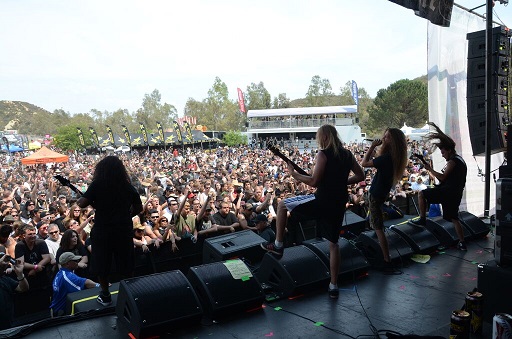 Last year, KISS front man Gene Simmons declared rock was “finally dead”, snuffed by file sharing sites that devalued music to the point where no one wants to pay for it any more. Rock musicians, in turn, are either giving up or working behind the scenes to help prop up the next Top 40 hit. “The craft is gone, and that is what technology, in part, has brought us,” he told Esquire magazine.

While there’s certainly a lot of truth behind Simmons’ technology tongue-lashing, turns out technology is also helping to keep rock music alive. Look no further than recent data from Spotify that found heavy metal and hard rock listeners are the most loyal. Here’s more from Spotify:

“We looked for repeated listens to the core artists from each genre — the ones sitting right at the “center” of the genres, as it were. So one could also reasonably conclude that Jazz, EDM, Classical, and Blues listeners play more fringe artists from those genres. This doesn’t necessarily mean Metal is “better” than Jazz (metalheads would disagree), but it does tell us that Metal fans are in fact the most hardcore, according to this new measure of genre loyalty.”

Listening to the data

The indicators show that heavy music is very much alive, but it’s up to the major players in heavy music to put aside the way they’ve always done things and embrace the tools, technology and data that will breathe new life into the genre, according to Velda Garcia, President of Fayz Media who manages up-and-coming metal bands Battlecross, Black Fast and Crimson Shadows.

“With heavy music fans being the most loyal, the industry can create the next generation of life long fans if they do business the right way,” she said. “Technology is a necessity especially when collecting and interpreting the massive amounts of data generated by a band and their audience.”

“Music Metric and Next Big Sound both do a great job of organizing an artist’s web traffic, unit sales, streams, and social media presence to measure results and gain actionable insight,” said Garcia. “Instead of relying on intuition, organized data exists to either back up that intuition or provide the intelligence to go with a strategy with better likelihood for success.”

Garcia cautions that technology should not be limited to gaining insight on a band’s presence or relevance – it’s also a necessity in managing fan engagement, making music available and maximizing profits (For more info on this topic, check out Kaan Turnali’s Fan Experience series).

“I can send an email blast to a group of promoters around the world, see who opens it and clicks on links, indicating the promoter’s interest in the band,” said Garcia. “I can pass on this information to our booking agent to reach out to those promoters who have shown interest and pitch the band for a festival or event that will contribute to the band’s growth. This is how data can help increase the likelihood of success, rather than pitching bands to promoters in the dark.”

Although Constant Contact currently meets Garcia’s needs, she fears she will quickly outgrow it.

“There is yet to be a good CRM system that I know of that can help artists, labels and others use fan data in a way that can help maximize revenue that the industry so desperately needs.”

Analytics can also influence important decision makers critical to a band’s growth. Garcia experienced this “ah-ha” moment when attempting to book her band Battlecross in South America and Mexico. Promoters in both regions weren’t interested at first, since they were a relatively new band. When Garcia showed promoters data showing the band’s rabid presence in Brazil and the work done to engage fans the promoters quickly reversed their decision with tours that yielded the most enthusiastic fan response in the bands 500 show history.

“Analytics are not only for planning, but for influencing,” said Garcia. “Look for data and develop ways and opportunities to present it to those stakeholders that are crucial to a band’s success. If the use of analytics like this can be adopted on a wider scale, there is no doubt that it can contribute to the growth of the genre.”

Is rock music dead? Not if technology has a say in the matter.

Learn more about the power of fan engagement here.