“We ran out of food” is the line explaining why NASA scientists are trying to resettle humanity on another planet in the recent sci-fi movie Interstellar. In the grim future represented in the movie, a global crop blight and second Dust Bowl are making the earth uninhabitable. The high tech smarts of an engineer turned farmer, the farmer’s daughter, and what remains of NASA are required to establish off-earth human colonies and save humanity.

Which brings me to the topic of farm technology, specifically drones. Early in the movie, the hero/farmer/engineer, played by Matthew McConaughey, sees a drone flying low over his farm. He identifies it as an Indian surveillance drone, which he chases, takes control over using his laptop, and dismantles to use the solar cells in his farm. While the implication is that the drone is a military one, he intends to repurpose it for his farm, in a sort of “turn swords into plowshares” moment. There’s been lots of speculation about what this scene means, but what it made me think of is the many uses of drone technology in agriculture. And the fact that agricultural technology of a high order will be required if we don’t want to end up like the communities in Interstellar, facing global food shortages. 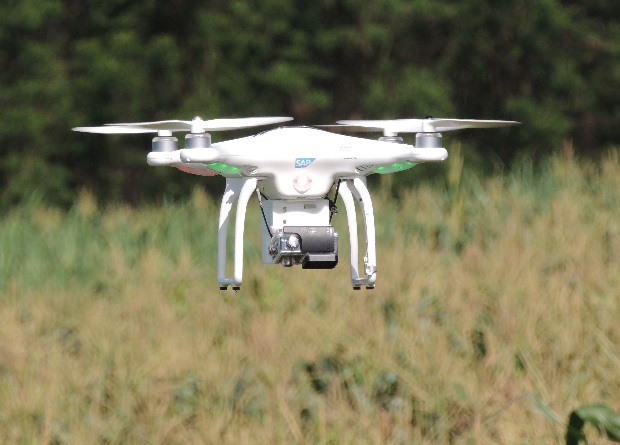 Farmers use small aircraft and drones today to collect sensor data (e.g. temperature, humidity) and take aerial pictures of fields that can be analyzed to determine the growth stage of crops, their nitrogen and water requirements, and their health — are they being invaded by Canada Thistle or Palmer Amaranth, are they being infested with armyworms or other pests and, if so, in exactly what parts of the field. Drone service providers in Iowa estimate that drone surveillance of crops enables farmers to identify problems on average two weeks earlier than they would be able to do with terrestrial surveillance methods (i.e. driving around and walking through fields). With a longer window in which to apply crop nutrients or crop protection chemicals, along with specific coordinates of the problem areas, farmers can treat fields in time to prevent additional damage and treat selected parts of fields, increasing yield and saving money by optimizing the application of crop inputs.

Aerial photography has been around for over a century (the first images were taken from 19th century hot air balloons). The technology to analyze aerial images tagged with geospatial coordinates to identify the optimal harvest time or predict outcomes like yield is a much more recent development.

A team of SAP developers in SAP’s Sao Leopoldo, Brazil office have been flying drones from DJI and Brazilian drone supplier Skydrones loaded with sensors and cameras over fields of crops to collect data for analysis. Using commercially available equipment, their drones can take pictures and monitor temperature and humidity in various parts of a field, along with plant height and reflectivity. All this data can be associated with specific parts of a field as small as 3 square inches. With this type of resolution, farmers could even focus on individual plants. But in a country like Brazil, were some individual fields are so large that 20-30 combines are required to harvest them, the amount of data these drones could potentially collect is staggering. The SAP team uses SAP HANA to manage the drone data because of its capacity to store and analyze huge volumes of data quickly, and also because of the built in engines to process geospatial and image data and do predictive analysis.

What these developers are doing with drones is, of course, similar to what many drone service providers do. What distinguishes the SAP effort is capabilities of the underlying HANA platform, which can merge the drone collected data with masses of disparate farm data that may come from individual Farm Management Systems and third-parties – historical yields, planting patterns, fertilizer and crop protection application histories, commodity prices, weather data, soil and plant sample analysis —  to identify meaningful correlations. SAP partner F4F Agriculture provides a network to collect and transform data from these sources and route it to relevant business partners for analysis. Ultimately, it’s the combination of real-time drone data with historical data that can help a farmer determine what to do in the next weeks and months.

The SAP developers working on the drone project are currently presenting their prototype to customers interested in using HANA as a platform to solve agricultural problems. If you’re interested in finding out how they can help, you can contact any of the team: Gustavo Camargo, Mateus Mollmann, Carlos Petry