Then and Now: Four and a Half Decades of LGBT Pride

The first of what were to become LGBT (lesbian, gay, bisexual, and transgender) Pride parades had no corporate sponsors or colorful floats, were not broadcast live on national television, and were less celebrations than they were demonstrations against discrimination and police raids and brutality. What led to those first demonstrations and what does this have to do with SAP?

In the early morning hours on Saturday, June 28, 1969, LGBT citizens were gathering as usual at the only bar in New York City where gay men were allowed to dance, the Stonewall Inn, on a street called Christopher Street in New York City. Though a welcoming place for disenfranchised and marginalized people, it was also the scene of weekly raids by the police.

So as usual, that morning several officers entered the Stonewall Inn to begin another raid. This time however the raid went dramatically differently, sparking riots that lasted for days which ultimately became known as the Stonewall Riots, which in hindsight became acknowledged as “the single most important event leading to the gay liberation movement and the modern fight for gay and lesbian rights in the United States.” 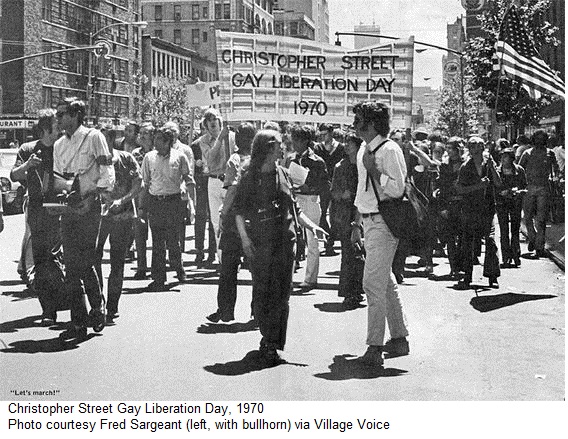 Later that year, a group of people championed by Craig Rodwell formally proposed an Annual Reminder to be held as a demonstration on the last Saturday in June. Thus was born the very first of the LGBT Pride parades on the last weekend in June in 1970, under the banner of Christopher Street Gay Liberation Day.  As Craig’s partner Fred Sargeant tells the story 5 years ago:

This was long before anyone had heard of a ‘Gay Pride March.’ Back then, it took a new sense of audacity and courage to take that giant step into the streets of Midtown Manhattan. One by one, we encouraged people to join the assembly. Finally, we began to move up Sixth Avenue. I stayed at the head of the march the entire way, and at one point, I climbed onto the base of a light pole and looked back. I was astonished; we stretched out as far as I could see, thousands of us.
…Of course, at the time, we could never have predicted that our efforts would lead to hundreds of millions of people gathering together around the world.

Since those early days the times and names have evolved to indeed become a celebration of diversity around the globe.  The San Francisco Pride parade has itself become “the largest LGBT event in the nation,” now celebrating its 45th year and expecting “over 200 parade contingents, 300 exhibitors, and 23 community-run stages and venues… for the expected 1.5 million participants.” (Castro Courier, June 2015)  And yes, it will be broadcast on national TV and will boast numerous colorful floats and corporate sponsors.

It is this year, exactly 46 years to the day since Stonewall and 45 years since the first march, that thanks to generous sponsorship from SAP Silicon Valley, SAP marches for the first time in the parade on June 28 in San Francisco (and YOU can join us). Also for the first time, SAP will be marching in Berlin the day before, where the parade is still known as Christopher Street Day.

We come together to mark how far we’ve come, and – for all the times have changed — all we have left to do is embrace the diversity and authenticity of all our colleagues, families, and friends, in order that we all can run at our best, despite, and because of, our many differences.  It’s an understatement to say that things have changed dramatically within my lifetime, and corporations like SAP play a significant role in this change. It’s an honor to be living in these times and I look forward to you joining us on the journey!

#RunProuder with us! All are welcome. Sign up here (SAP colleagues) or ask an SAP friend to sign you up.