Here is a very simple customer incident I opened last week (don’t bother trying to understand what the issue is, the important is the kind of information provided => video to show exactly how to reproduce this issue + steps for reconstruction, login details, etc.): 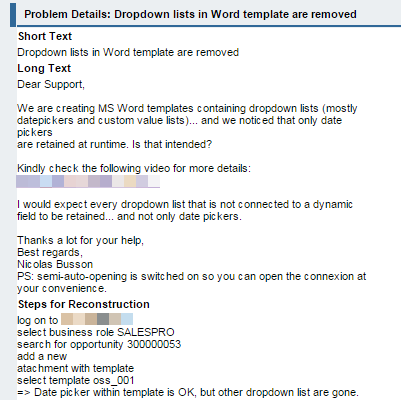 This was probably not my best issue description because this is the response I got 4 days later:

OK: everybody should be given a second chance right? I thought my message was overlooked (as it often is), so I sent back the message to SAP with this answer:

Ooops… Guess I was wrong, problem seems to be deeper:

Well, what do I answer now? 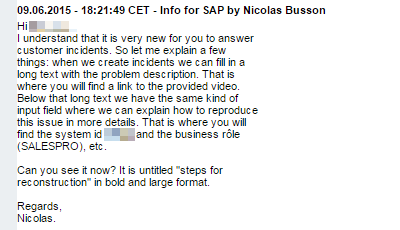 Now the second step: explain that this bug has nothing to do with any customization we did in our system, and the call stack provided isn’t even close to where the problem lies…

And here is what I can’t bear from sap support anymore: fallacious arguments to make me close this incident and fix the problem myself because it will be less time consuming: 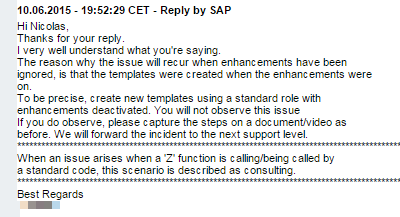 Fallacious arguments means I’ve got the right not to be 100% honest in my last answer, doesn’t it?

Imagine I had spent a whole day creating new test cases for the incident processor (because he doesn’t know what he’s talking about at all): that would have been for nothing! Because SAP support will always find a very good reason not to process your incident:

But I’m not the kind of guy that gives up so easily… and now I know I should add a link to my SCN profile in my signature (thanks Jürgen L), so let’s give it a try and help the processor in the right direction: 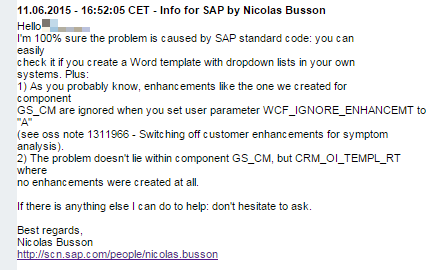 Youhouuuuu! An oss note is on its way:

First version of the note doesn’t solve the reported issue, but at least I wasn’t answered the usual “system works as designed”… so it’s ok: I know it’s a matter of time until this bug is fixed, and that’s great: if that was not so difficult to reach development support, I’d probably be a happy customer.

Still doesn’t work but we’ve never been so close to happy ending:

If you’re wondering what I filled-in in the “Positive call closure survey“, the answer is: nothing. In fact I think this blog post may have been found by the incident processor (because as the dates suggest I wrote it while the incident was being processed, like some kind of “real TV”) so he decided not to give me the possibility to fill-in this survey. He was probably afraid to be given a bad score (which wouldn’t have been so bad honestly, because I like to give good feedback when the reported problem is solved).

Anyway, I know the road is long, and I’ve been walking this path everyday since 2003…