CEOs and Employees Want Change. So Why Isn’t It Happening? 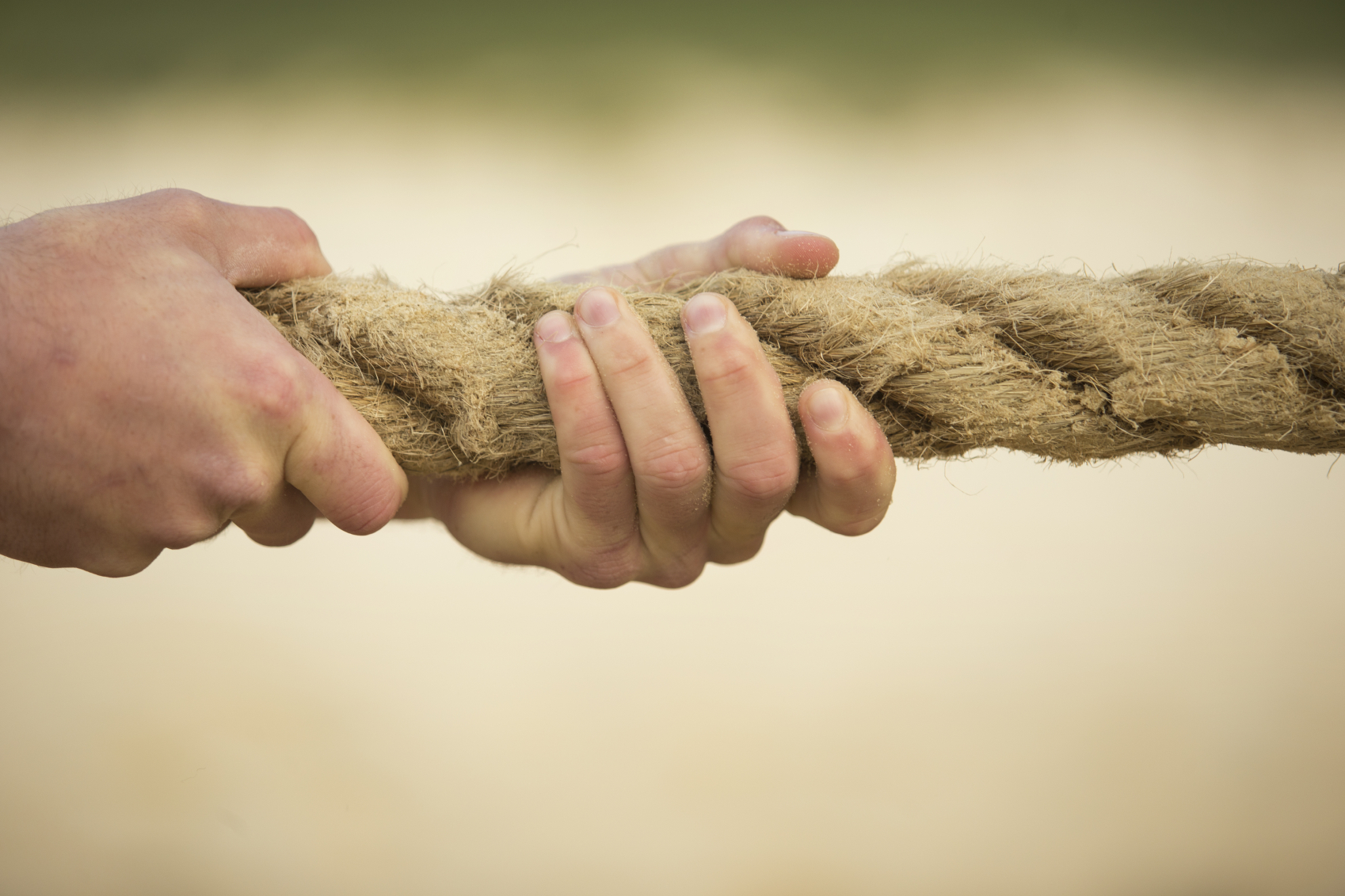 One of the things I consistently notice when speaking to employees about culture change is the finger-pointing back at senior management.  I hear  “They need to change” or “Management needs to change their behaviors first!”.    Non-coincidentally, this exact same sentiment is shared when speaking with management.  They’re saying: “Our employees don’t want to change.  We have to force them to comply”.

There’s no doubt that changing an organization’s culture requires both management and employees to be in it together, however, we’ve fallen too deep into the trap of “us versus them” when it comes to making the first move for change.

Within most organizations, the lines between employees are very explicit – nurses versus doctors versus administrators, line managers versus staff, sales versus marketing, local versus headquarters, etc.

This divide stems from social belonging. We are either part of one group or another and we identify ourselves as such. We routinely blame our problems on one another when things go wrong.   Sales didn’t make its numbers because marketing didn’t deliver enough leads.   We have too much inventory because production didn’t do its job.   We’ve all been there. The list can go on and on.

It really isn’t any different when it comes to changing culture.   Employees blame management for not wanting to change or exhibiting the wrong behaviors. Management blames employees for not changing (or not changing fast enough). It’s a vicious circle characterized by mistrust and dirty tactics being taken by management and employees alike.

But what if management really wanted to (truly and authentically) change? Would that make a difference to employees? Would that bring the two closer to co-create solutions as opposed to just pointing our problems and blaming each other?

Some evidence suggests that this isn’t just wishful thinking. Korn Ferry, a leadership development firm recently released new data that is based on more than 13,000 psychometric tests administered to CEOs over the past 15 years.

The findings highlight a significant change in CEO attitudes over the past 15 years. Today’s CEOs appear far better equipped to take on the dynamic, hyper-competitive world in which their companies operate. They are more curious and willing to tackle problems in novel ways. They are more comfortable with ambiguity, and they are more agile learners.

With fewer CEOs resisting change and sticking to their old ways, the issue is not necessarily with the C-suite anymore.   Rather, there’s a big disconnect — a gap of you would, between what’s unfolding in the C-suite and what’s actually happening in the rest of the organization.

This divide is much greater than we know.  A study of more than 36,000 employees by advisory services firm LRN found that 97% experience either autocratic or coercive management or, at the least, hierarchical command-and-control.

So despite a “push for change” from the top, senior leadership’s words fall on deaf ears.   Employees just aren’t feeling it (as evident by stagnating engagement scores). This only causes things to get worse.  When management feels they are not being heard, they assert even more command and control, forcing change, inciting fear and even the occasional “public execution”.  (and there goes that vicious circle again).

Management guru Steve Denning offers a rational view as to why and it is rooted deeply in the purpose of an organization.   “Once a firm embraces maximizing shareholder value and the current stock price as its goal, and lavishly compensates top management to that end, the C-suite has little choice but to deploy command-and-control management,” he asserts. “That’s because making money for shareholders and the C-suite is inherently uninspiring to employees. The C-suite must compel employees to obey.”

So how do we stop the madness? How do we get out of this vicious circle that frankly, doesn’t benefit either management or employees.

Nearly everyone is trying to crack the code on how to turn the CEO’s desire into an organizational reality.   Some organizations are going as far as changing their organizational models, adopting flatter organizations or Holacracy, such as in the recent case with online apparel powerhouse Zappos.  However, even those models have yet to be proven and can mean major disruption to the business.

The answer may be rooted in a notion that’s been rapidly spreading around the world and has likely already impacted most of us in one way or another.

Power is shifting in our world in ways that are unimaginable. In the past few years we’ve witnessed a major shift from old power, where control was being held by a few individuals (often characterized as inaccessible and leader-driven) to new power, held by many in an open, participatory, and peer-driven way.

This drastic shift is behind many of the phenomenons that once took tremendous effort and resources to create.   They are now cheap and scalable in part due to a tremendously networked society.

We see signs of new power everywhere, including major scale political protests being organized and growing in matters of minutes (Occupy Wall Street, Arab Spring, Ferguson, to name a few), to upstart businesses upending traditional industries and rapidly taking market share in a matter of months.   New business models such as the ones behind Facebook, Youtube, Uber, AirBNB and Etsy are built on new power. Everyone can be a creator of content, goods, or services.   Barriers to entry have been blown to bits as it is no longer just major corporations with vast resources who can run and scale global businesses.

Adapted from “This is New Power” by Jeremy Heimans & Henry Timms, HBR 2014

This shift in power transcends right down to an employee, creating a networked and socially empowered workforce that can operate and execute change outside the borders of traditional organizational silos. More so, it can execute change organically, without seeking permission from senior management or other authorities that we would typically find in old power models.

Employees now have a new-found voice. One that was very difficult to unleash and scale before, as it would take navigating through a maze of organizational charts and gate-keepers to get to a decision-maker.   Entire movements are being created from the bottom-up.   These movements are not demanding change.   They drive change – from the bottom up.

One such movement was created last week at 400,000 employee-strong IBM.   When IBM decided to amend its expense policy to disallow expensing ride sharing services such as Uber.   Max Black, a 26-year-old global business consultant based in New York City took a stand.   He posted his view on IBM’s internal social network, calling the company out for being hypocritical by being in the business of preaching mobility transformation to its clients, but effectively outlawing one of the best examples of mobile innovation.   Within hours, Black’s post drew over 1,200 supporters from across the organization. Sixteen hours later, IBM’s HR department reversed the ban.

What’s important to underscore is that this wasn’t an exercise in rebellion, protest or any form of corporate anarchy.   It was a type of culture hacking that is now happening inside many organizations, large and small, where both employees and management bring up issues and solutions to the forefront so they can be openly discussed and resolved.

Management benefits by being part of an open conversation as opposed to resorting on spying on those who are “whispering around the water cooler” or traditional employee surveys, which hardly ever get at the root causes of friction.   In IBM’s case, Diane Gherson, their Head of HR clearly gets the meaning of new power.   She didn’t respond by issuing a company-wide email or debating the policy.  She jumped onto Black’s post to share the good news. “It’s one of the great things about social business that we can get perspectives so quickly.” she noted.

Most progressive organizations today understand and are gravitating towards new power to shape their cultures.   Organizations such as Google, Netflix, Zappos and Hubspot realize that despite their size and innovative products, their business models can be easily replicated.   What cannot be “copied and pasted” are their cultures.   Having culture built on the premise of new power opens up many avenues that diminish the “us vs. them” divide and instead focuses on collective purpose and how “WE” move forward.

The unfortunate side, at least for the time being, is that Max Black is an anomaly as most employees and majority of managers still believe that they operate in a world of old power where it’s all about exercising authority and rewarding for compliance.

As a leader, asserting control when things don’t go your way is always an option, but in reality, there are no old roads to new places. In these times of perpetual change, most of us are driving on an uncharted road at the moment without a clear map and clear direction.   We have to be cognizant that despite all the pressure we feel, the pendulum cannot swing sharply towards old power, else we will continue to see more of the same.

It is clear from Korn Ferry’s work and most other sources that both CEOs and employees indeed want and need change.We won’t get there through traditional top-down programs, slogans or PR campaigns.   We will get there through valuing collaboration and co-creation, where everyone, managers and employees, own the problem and the solution.

Through finding an equilibrium between old power and new power, we can find ways to come together. Ways that transcend the distrust that comes with the “us versus them” mindset and get things out in the open, so they can be addressed and ultimately fixed.

Fantastic insight Reuven, thanks for sharing. The IBM/Uber example is interesting. What if it was upper management that shared the idea on their social platform first? "Hey, we're thinking it might be a good idea to have all employees refrain from using Uber on business trips, what do you think?" This also reminds me of a recent example at SAP when Bill McDermott wanted to get feedback from employees about enhancing the company logo. Everyone was able to weigh in and it altered the outcome in a positive way.

Thanks Tim!  Absolutely.  It works both ways.