In this blog I will be talking about our journey of creating a storyboard using SAP Lumira.

Crime behind the doors

Domestic violence is a horrifying experience for anyone. It knows no boundaries. More and more people are becoming aware and coming forward to report these crimes. Victorian police is aware of this and is trying its best to tackle these incidents. We used their stats as our data set for Lumira. SAP Lumira helped us to visualize this data through different perceptions like yearly basis, region wise etcetera and provides analysis, for what we are looking, in a detail. Family incidents are one of the most increasing crime in Victoria since 2010. The main reason is people do not report to police about their family violence incidents immediately and this results to be late in monitoring and controlling them on time.

We came across a data for number of family incidents along with their rates for four regions of Victoria along with their Local Government Areas (LGA) for 5 years. We cleansed the data file (a number of times to make it compatible) and imported that into SAP Lumira. We started creating the visualizations. First visualization was about LGA with highest offences and the answer came out to be Casey. I was offended because (I love Casey!) I live in this area for the last one year and never heard one in my locality. 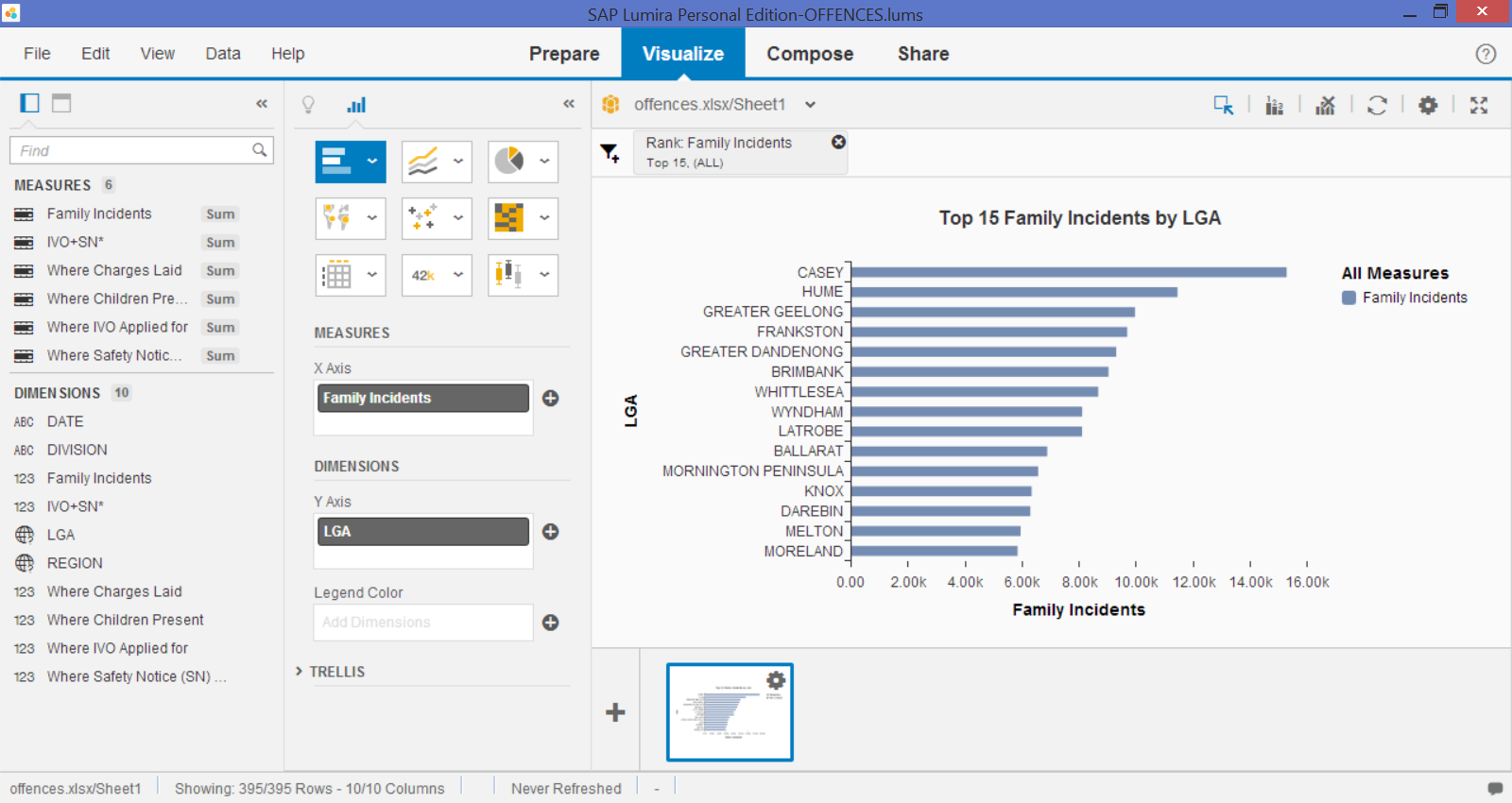 My conscience did not allow me to go further, I was upset L with the results. It was our first hurdle. Alina suggested to use rates, and we thought it would be better than using number of offences, as comparing one LGA to another using a same base would be more logical. This resulted in one more cleansing of data. Then the play-time started.

Working in Lumira is fun. We started with simple visualization comparing rate of incidents in various Regions of Victoria for 5 year time period. Suddenly we saw our second hurdle, when we were using LGAs the incident rate was correct but with the Regions it was adding up all the LGA rates for that region. There is a feature in Lumira where we can change the aggregation function, it was changed from Sum to Average to get the correct results. 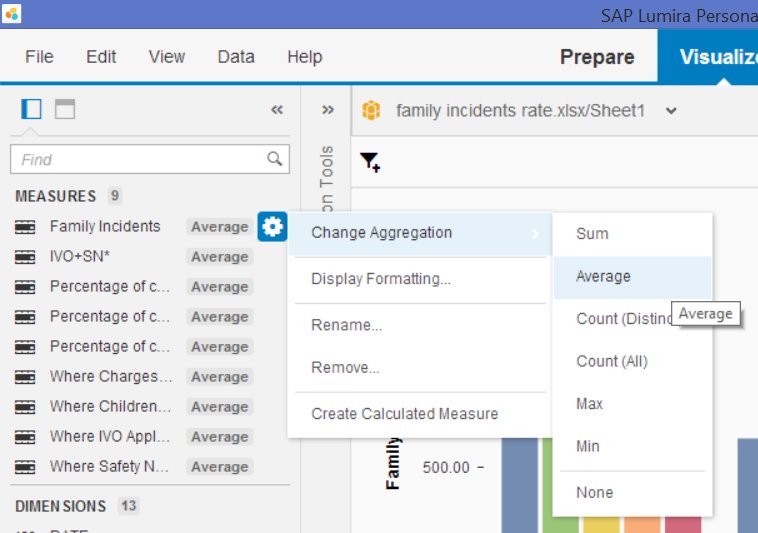 We found out there has been increase in incidents in every region except Southern Metro region for the last year.

Some more visualizations were created for Family incidents by regions and dates. 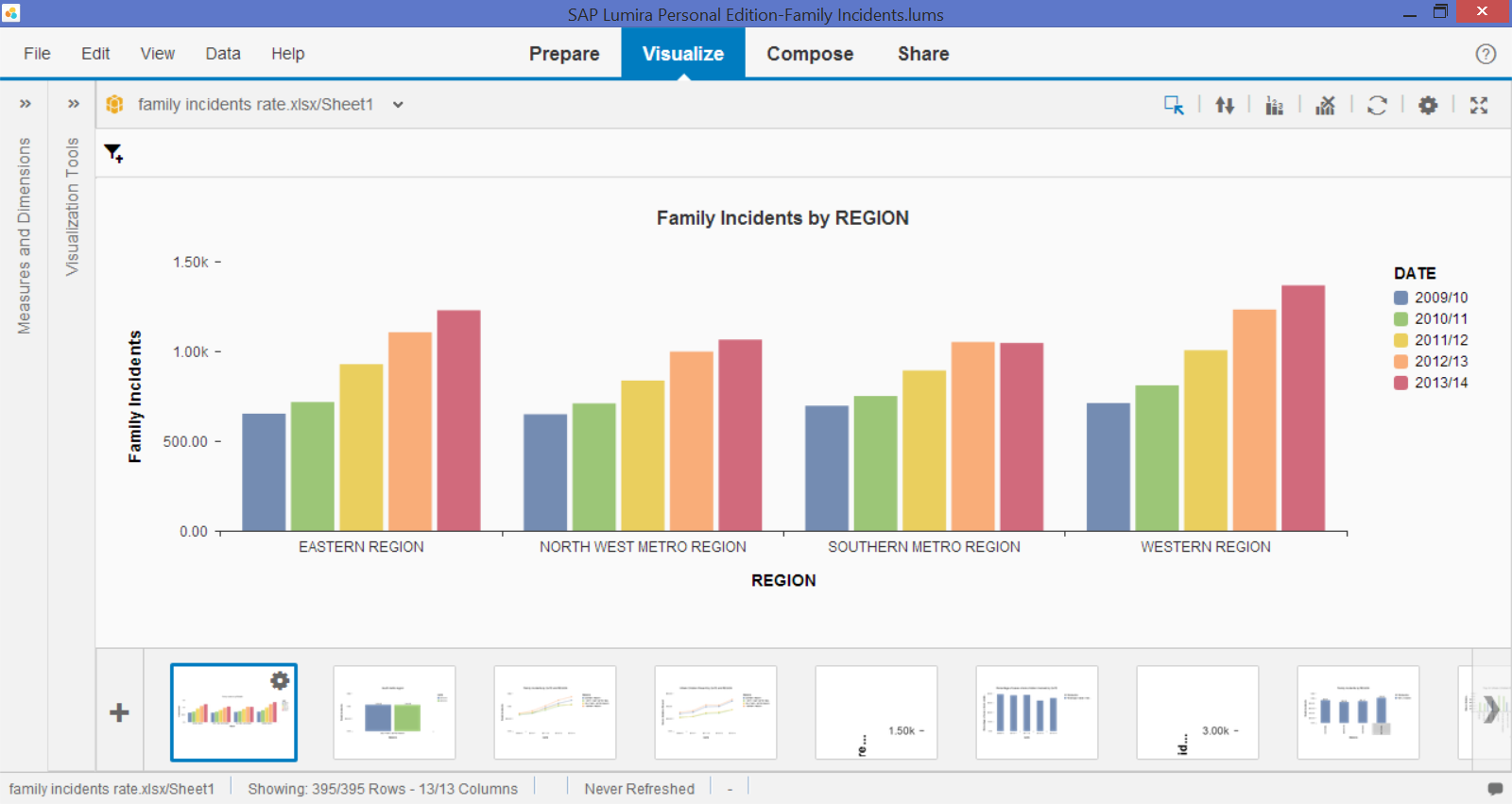 After that we wanted to see in how many cases children were present and made the following visualization. 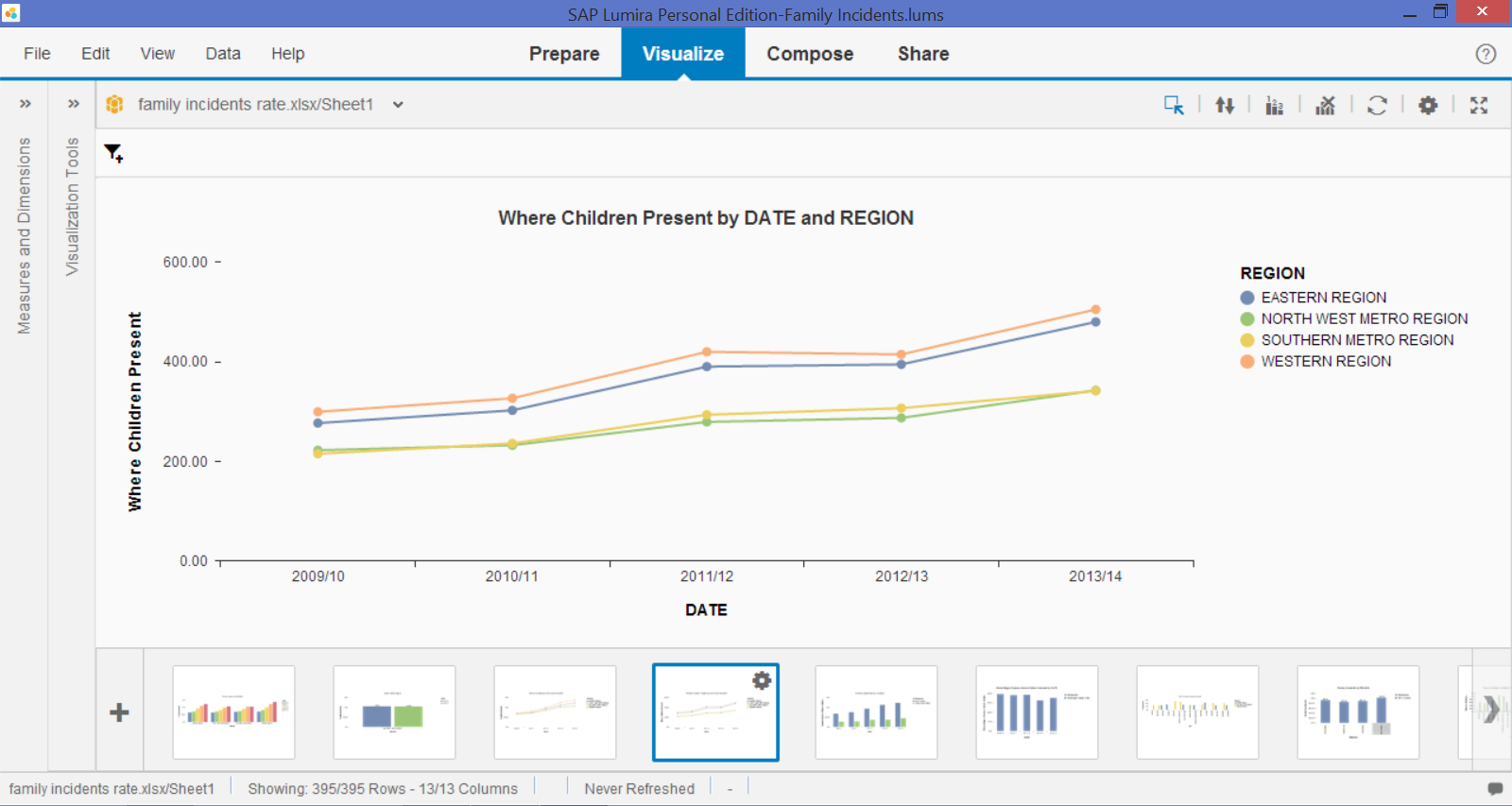 It made us curious. Then we compared number of cases where children were present to total cases. 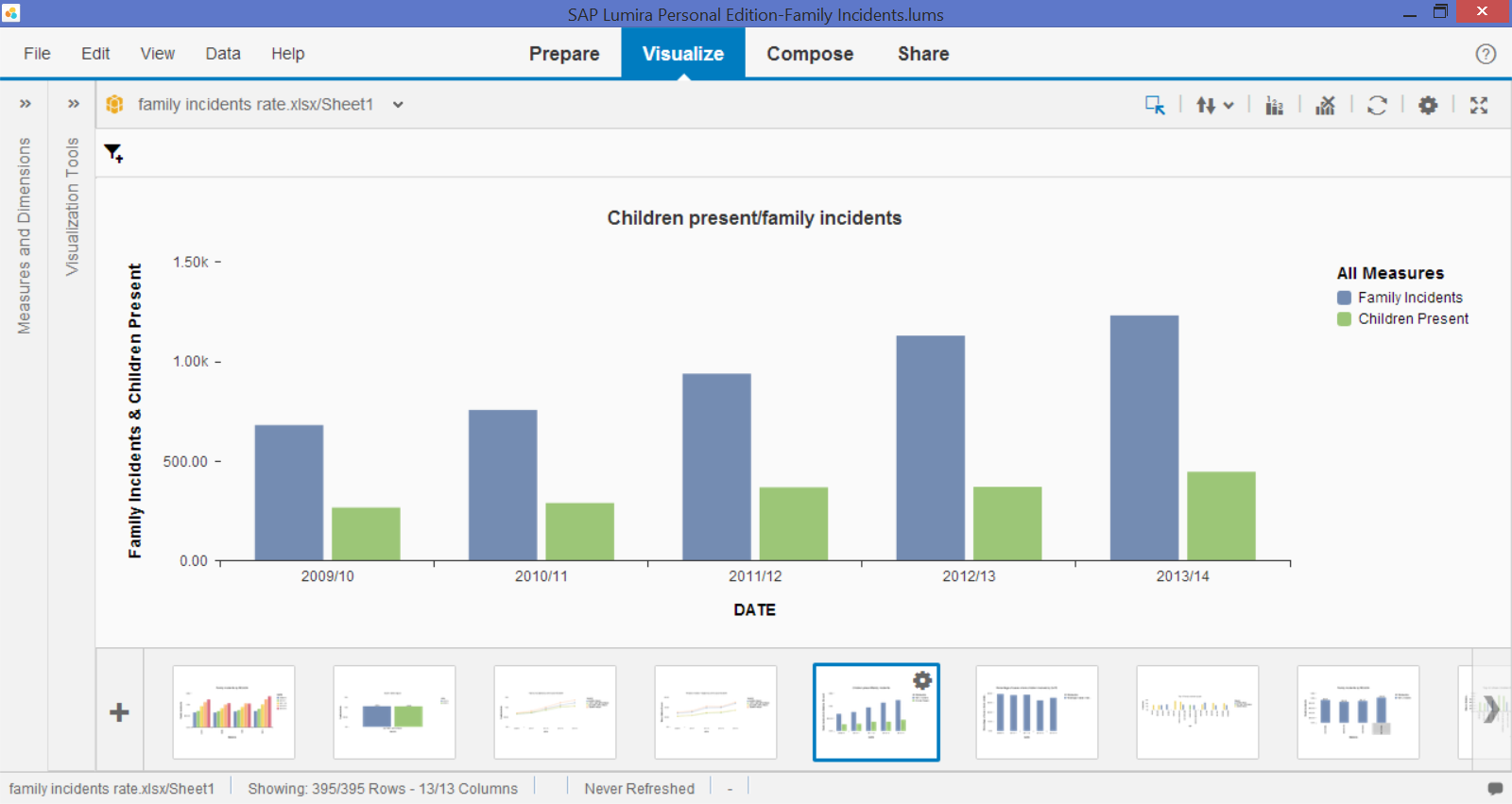 Even this visualization was not able to answer our question properly. This resulted in finding a way to have percentage of cases with children to total number of cases.

We used creating formula function in Prepare Tab to find the percentage of cases where children were present to total number of cases. Feeling: Lumira is awesome 😎 ! 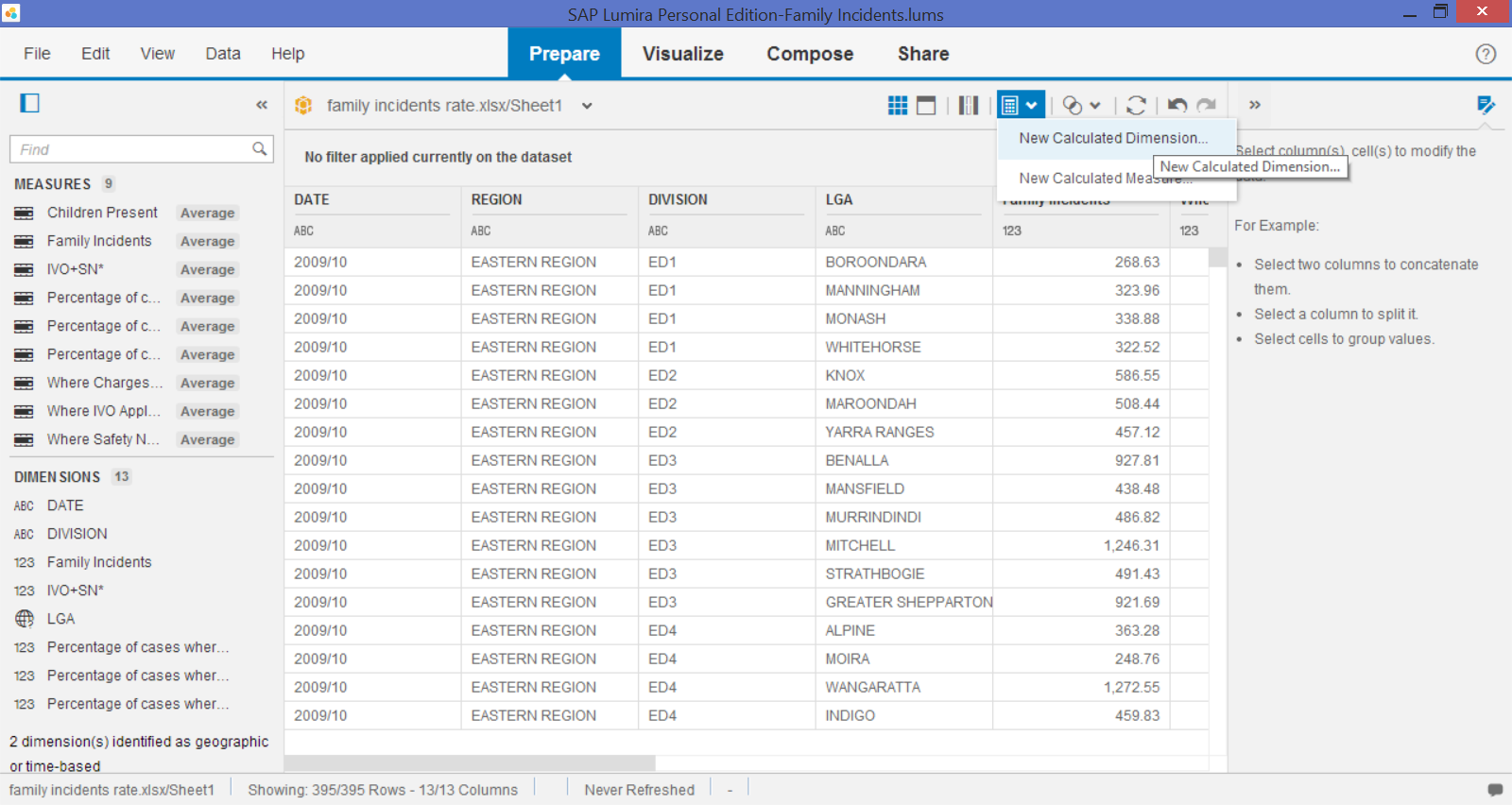 It resulted in following visualization. 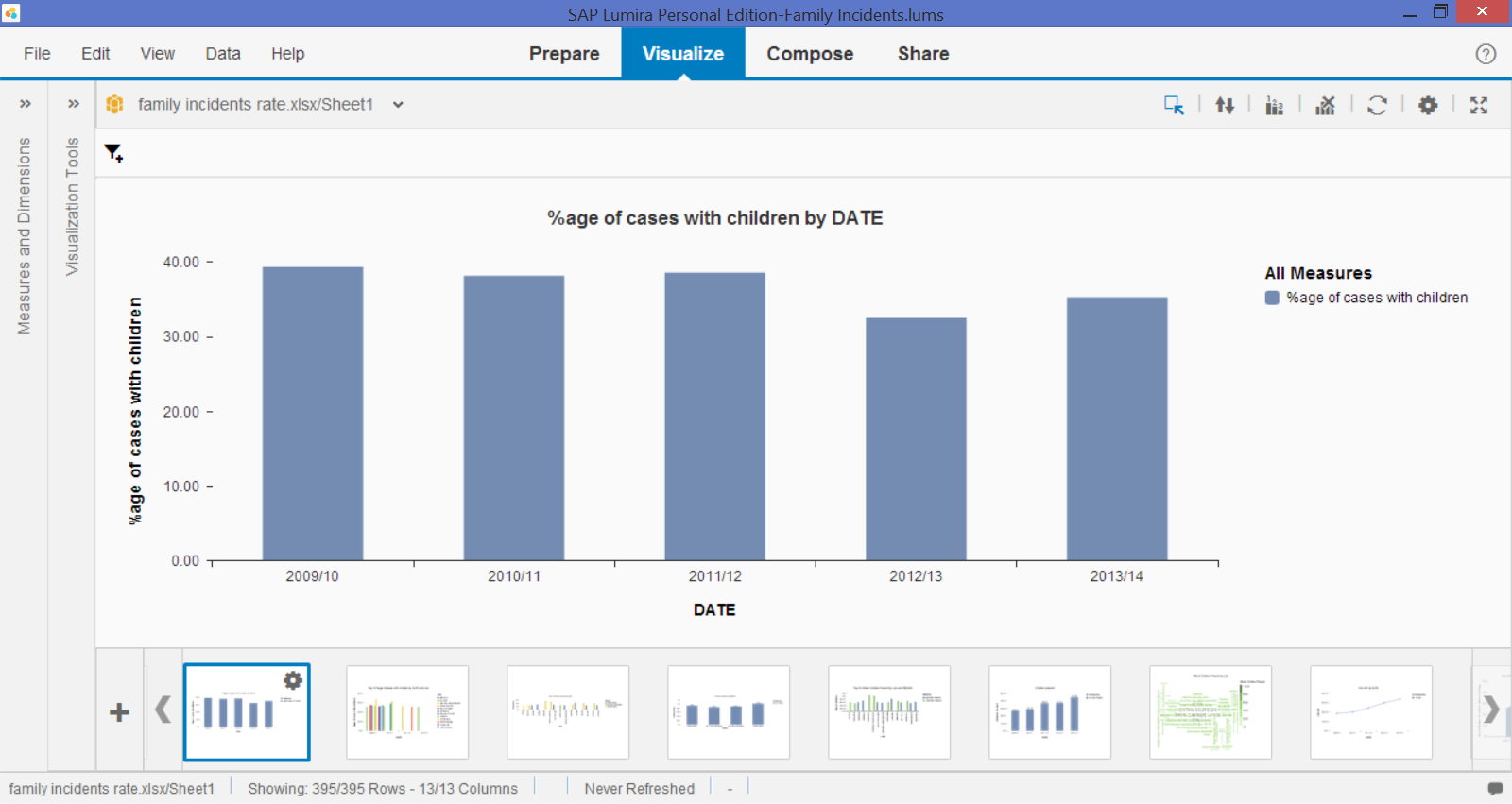 Further we saw that in West Wimmera half of the cases have children involved in them. This visualization also show us that metro regions have lesser rate of cases with children present. 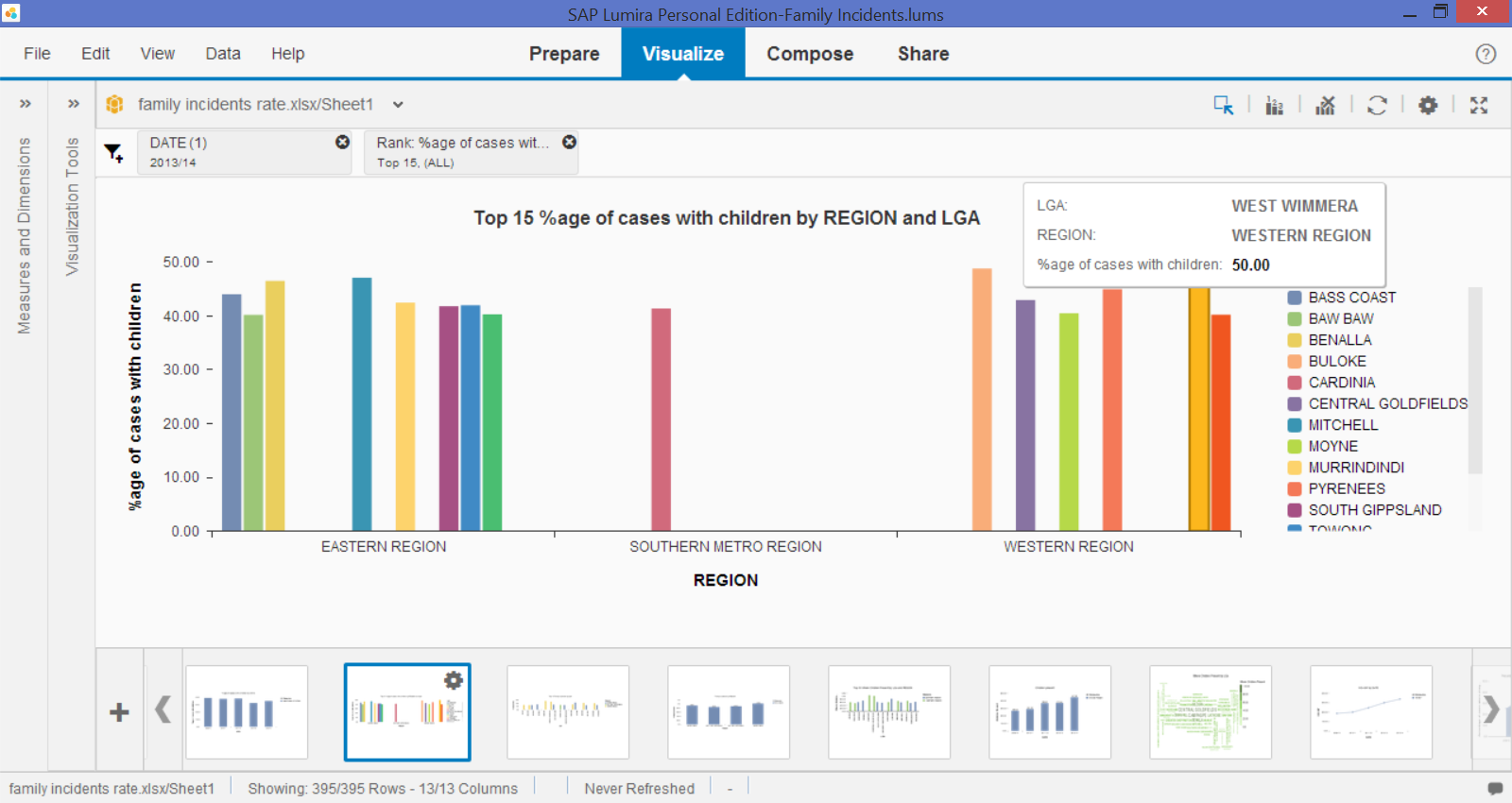 Similarly other visualizations were created along with the questions that came in our mind which led to our storyboard.

Here is our storyboard and findings: 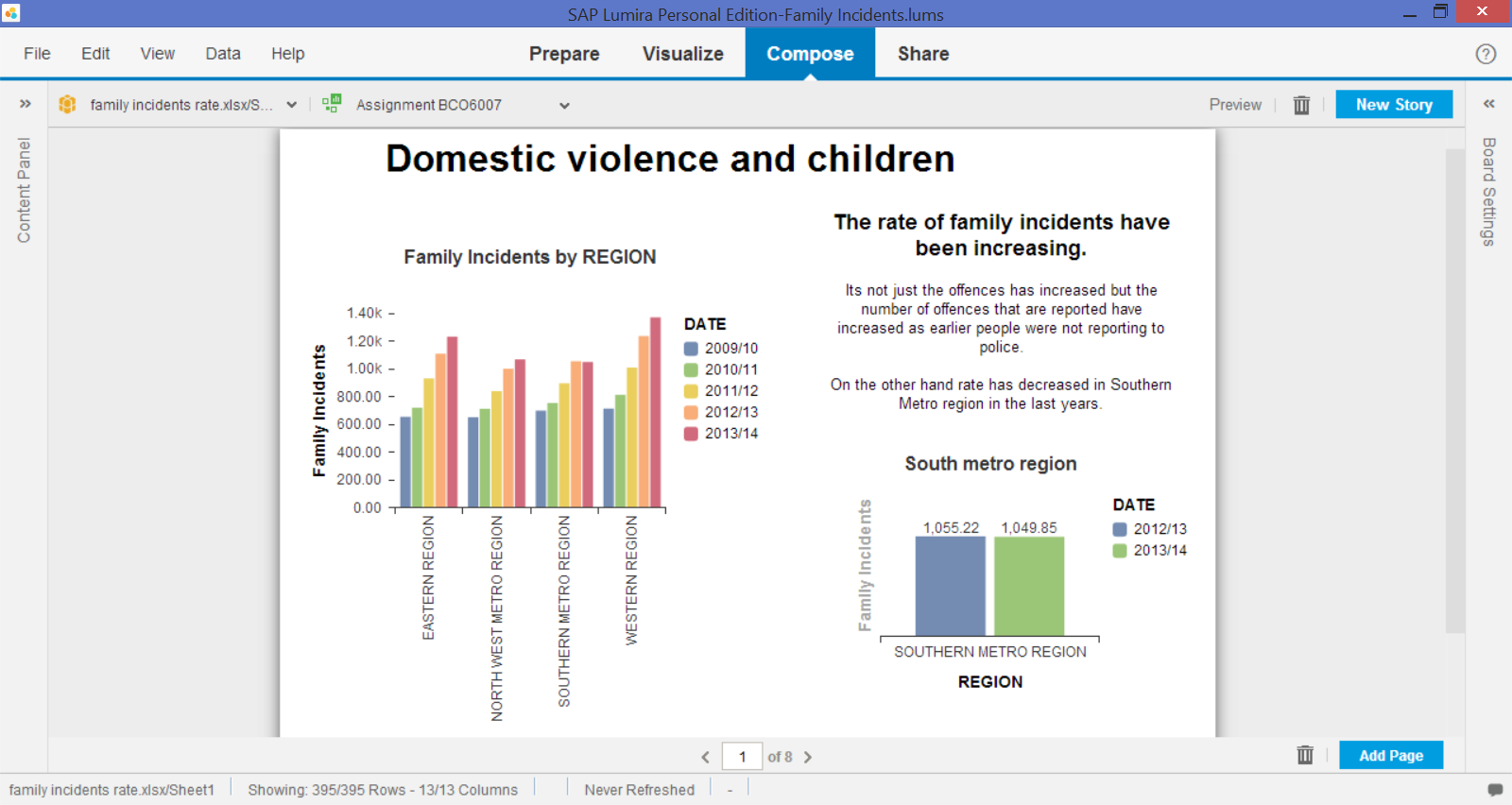 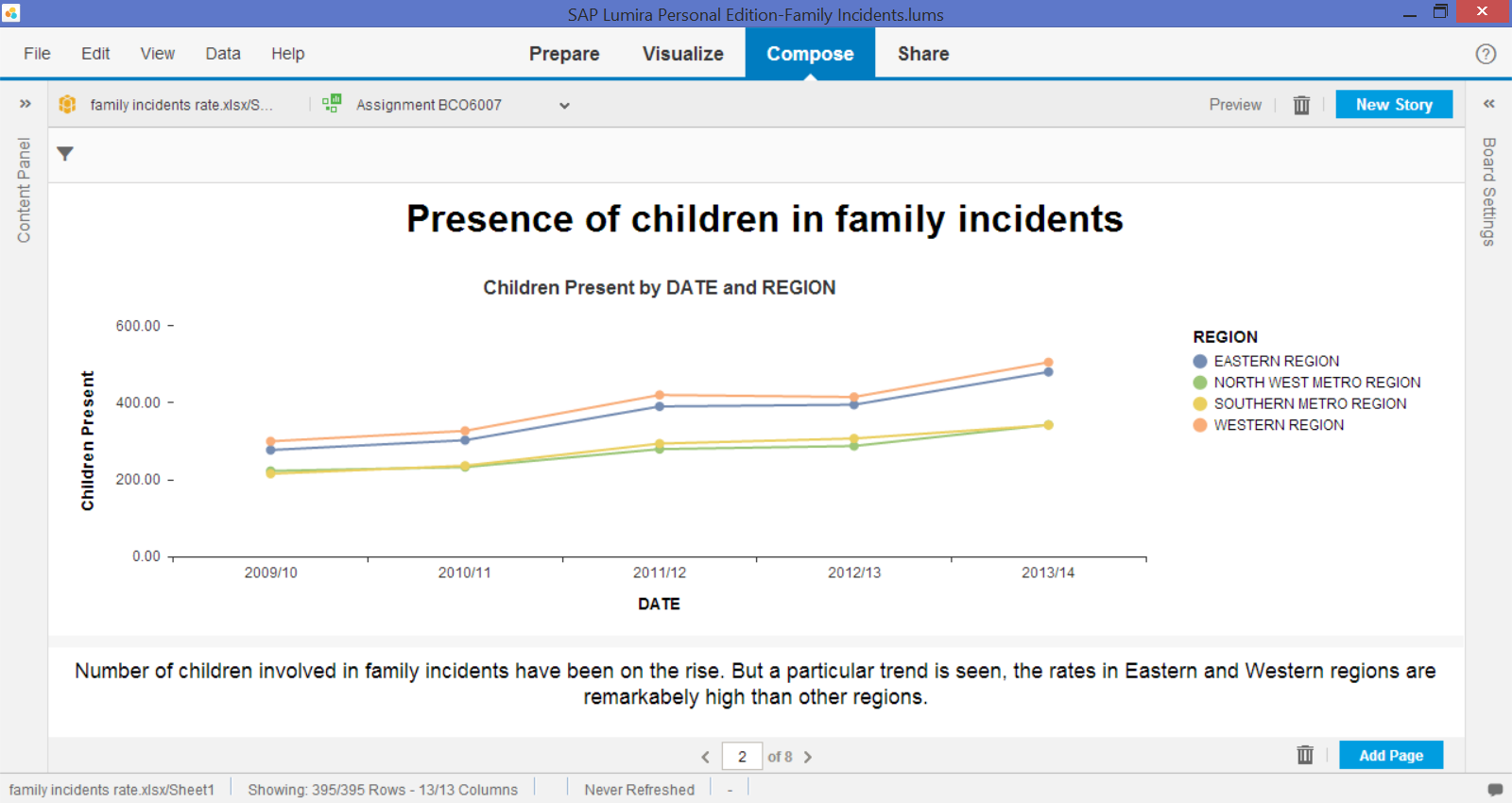 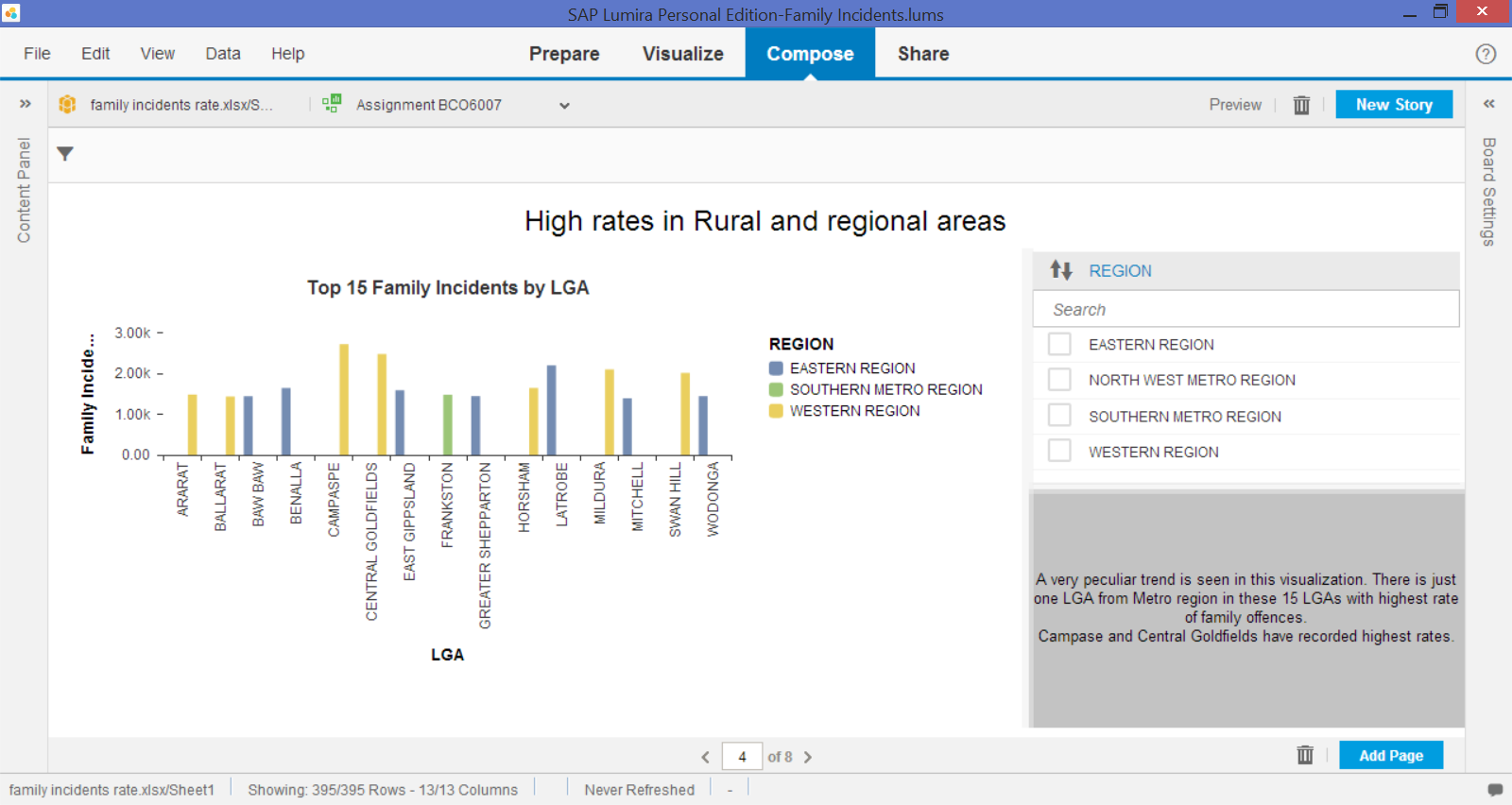 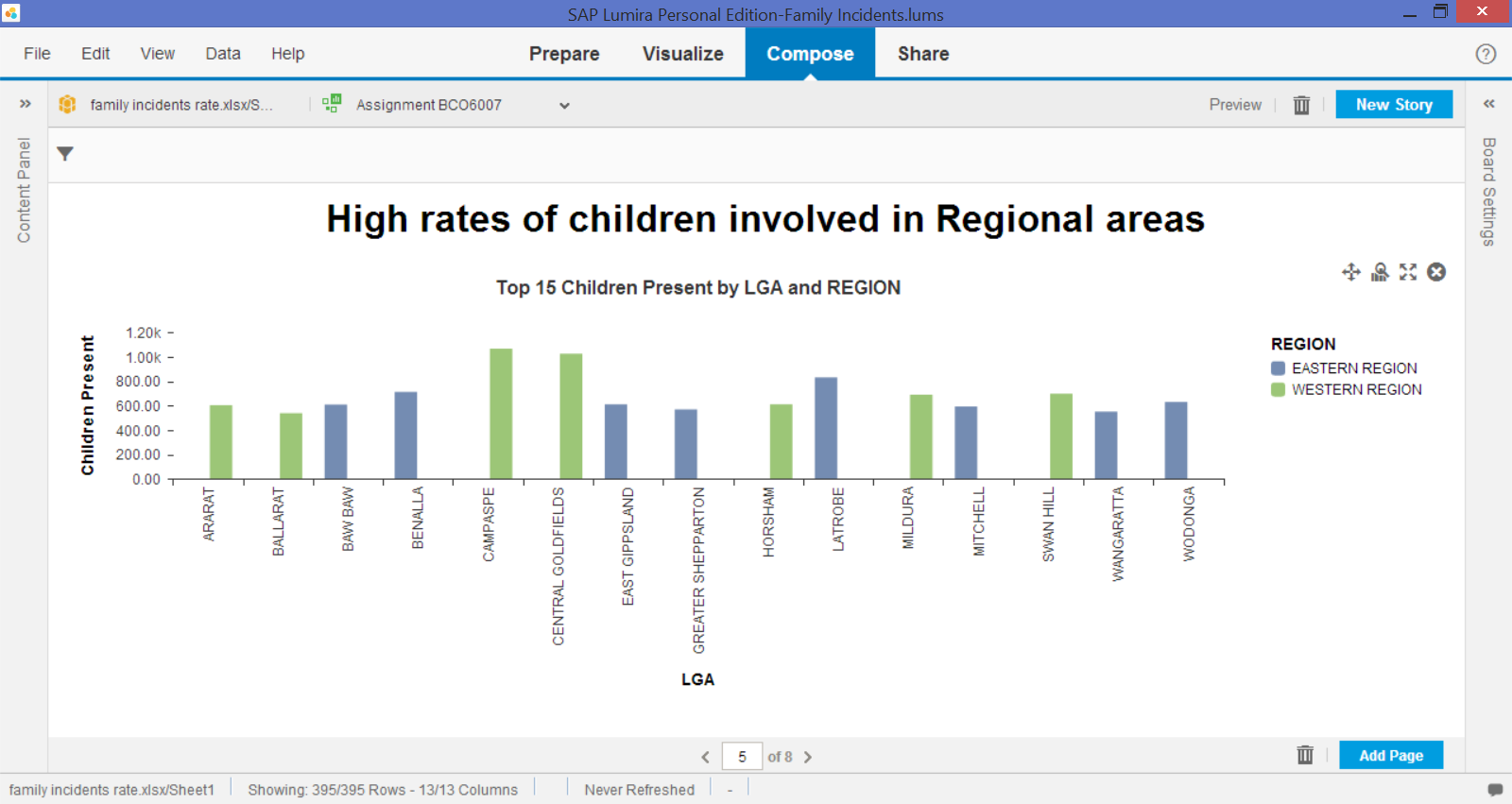 Conclusion of story: From the data that we have collected and analysed, visualizations show that Western region is rapidly increasing in family incidents. Reporting has increased the offence rates. Where there is a presence of couple then there is high chance of child been exposed directly to such incidents. But, Victorian Law and police is trying their best to reduce those incidents by taking strict action against offenders and hiring more officers. So, hoping in near future there will be minimal cases or issues about family incidents.

Experience of our journey

In the end I would like to say using SAP Lumira is fun. Just let you imagination jump from one question to another and it will answer your queries. Self-explanatory story board and stunning infographics can be prepared. Data starts speaking when introduced to Lumira.

This blog is written as a part of the assessment for bco6007 at victoria_university. Special Thanks to paul_hawking.