For developers and consultants, finding ways to simplify access to different environments and development tools can be of great help. This is especially true for SAP BW consultants, who are required to frequently access the BW system as well as one or more source systems, through several different development environments and frontend tools. While this series of articles will provide examples from my experience as a SAP BW consultant, some of it will also be relevant for other consultants and power users using SAP systems.

In this first part I will showcase the basic idea of working with shortcuts by showing how to simplify access to BEx Web. I will also present some other helpful shortcuts. In the second part I will deal with SAP shortcuts. 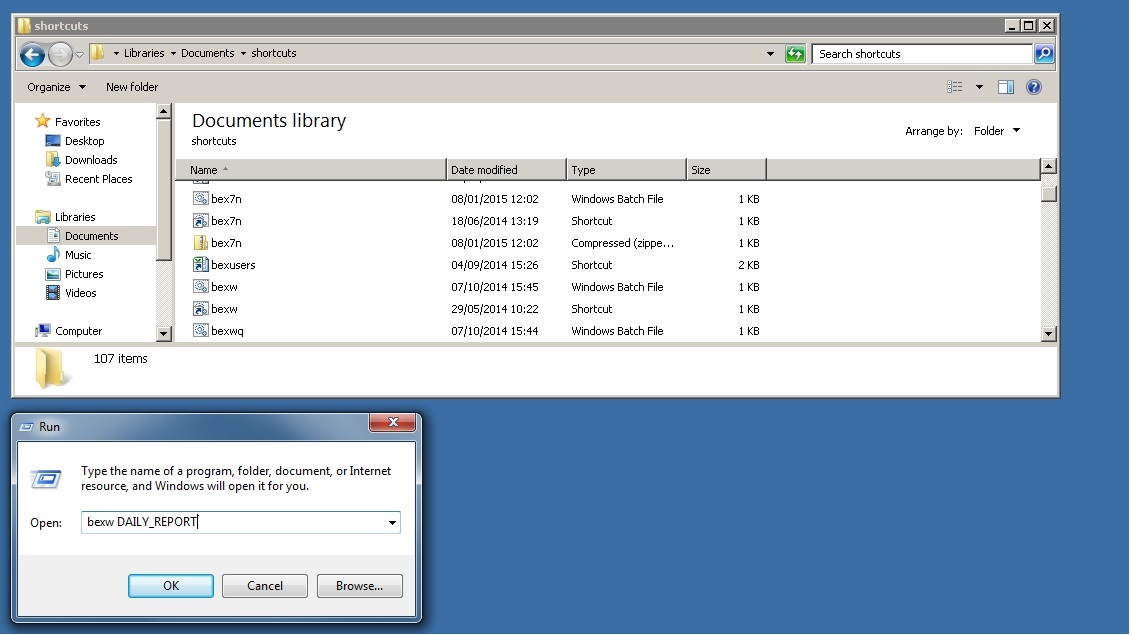 The concept involves creating a folder with batch scripts accessing the required environments and tools, and shortcuts referring to those scripts. The folder then has to be added to the Windows PATH environment variable. Once that is done, you can access any of the shortcuts by simply pressing Start+R, and then typing in the command. The idea is that the script will handle as much of the environment and login details as possible, besides (maybe) authentication and possibly allowing parametrization (such as launching a specific query from command line).

If you don’t get why this is of help, think about all the time spent in GUI screens searching for the system to log in to, or looking for a specific query. In organizations with many environments and/or many queries, this adds up to quite some time.

Do note that the hyperlinks inside the scripts in this and the following examples should be modified before use.

In this simple first example we will create a script that calls BEx Web in the production environment with a query parameter. I’ll get to the SAPGUI examples in the second part.

1. Create the shortcuts folder. If you want it to be available to other users, you should create it in a shared drive, however do note that this prevents some personal customizations, as you’ll see in the second part. For this example, we’ll assume you created a folder in the c drive called “shortcuts”.

2. Add this folder to the PATH environment variable. press Start+R and type:

You only have to run this command ONCE, unless the PATH variable gets overwritten in your organization when you restart the computer . In this case you could add a batch file with this command to the “Startup” folder in the windows start menu.

3. Create a script. I’ve dealt a bit with the structure of the BEx Web URL here, but I’ll repeat the relevant parts:

The URL we’re launching should look something like this:

Where host and port are the relevant host and port for your production system. %1 is a the parameter which is replaced at runtime with the technical name of the query. Some details regarding this structure can be found here.

Open up a text editor (notepad is fine for this), and paste in the following text, replacing host and port with the host and port of your production environment. If you’re unsure regarding the host and port, launch a query in Bex Web from say the portal or Query Designer, and then grab them from the URL.

Open windows explorer and navigate to the shortcuts folder. Right-click bexw.bat and choose “Create Shortcut”. Then right click the new file and choose “Rename”. Rename the new file to “bexw”.

Assuming the technical name of a query is DAILY_REPORT, you should be able to launch the query in BEx Web, in the production environment, by pressing Start+R and typing:

You could create similar shortcuts for other environments, or even parametrize the host name, if that is more convenient to you.

Some other useful examples

Want to start Query Designer with a query already open? Here’s a script that can do just that (but still requires you to authenticate and choose the environment).

You can see a bit of documentation for this in this SAP help page .

notice that if you’re on a split-stack environment, the port needs to be the ABAP port, and not the JAVA port (The JAVA port is the one from the previous example).

You may want to configure your browser to automatically recognize the 3xbex files generated by the URL. In Internet Explorer 10, this is done by accessing the download window ( Ctrl+J ), right clicking the file, and unchecking “Always ask before opening this type of file”.

A limitation of this method is that the query opened does not register in the bex “history” folder.

You can also launch Bex Analyzer in a similar manner. In the second part I’ll show how to open Bex Analyzer with the SAP environment already chosen.

What about Bex Broadcaster? Here’s a script for launching it with a query. This time we’ll need the JAVA port. You could also launch it with the technical name of the broadcast setting by replacing “SOURCE_QUERY” with “SETTING_ID”.

Don’t you get annoyed with how note numbers are mentioned without URLs, and then you have to cut and paste that note into the SAP search site?

Here’s a script with a note as a parameter. As a side note, you may also want to install a certificate for the SAP service marketplace.

As a final note, if you’re a Firefox user, Ubiquity  is a neat alternative to the command line, although currently not in active development.