Gambling is not just your problem!

George Washington has powerfully described the cumulative effects of gambling:

‘Avoid gaming. This is a vice which is productive of every possible evil; equally injurious to the morals and health of its votaries. It is the child of avarice, the brother of iniquity, and father of mischief. It has been the ruin of many worthy families, the loss of many a man’s honor, and the cause of Suicide. To all those who enter the lists, it is equally fascinating. The successful gamester pushes his good fortune, till it is overtaken by a reverse. The losing gamester, in hopes of retrieving past misfortunes, goes on from bad to worse, till grown desperate he pushes at everything and loses his all. In a word, few gain by this abominable practice, (the profit if any being diffused) while thousands are injured.’

This blog is a result of Professor Paul Hawking’s motivation, to document our journey through the task of collection, preparation, analysis and visualization of data for domestic violence. As a part of the course BCO6007 Business Analytics, Victoria University, our analysis of domestic violent trends in the recent years prove that gambling is an important causative factor in Victoria.

In the initial process of collecting data, we came across a few datasets for personal and household crime statistics from Australian Bureau of Statistics. These facts did not correspond to a time-series, and made it irrelevant for visualisations. Thanks to our friend and classmate Saurabh for pointing out the dataset in Victoria Police crime statistics that provided information for Victoria grouped by the Local Government Area. This helped us to extract the Family Incidents Report for a substantial period.

Between 2011 and 2012, the Australian economy observed a significant decline in economic progress. The period concerned and the following periods had a sharp boost in reported number of family incidents in Victoria, compared to previous times. We began examining the social risk factors, concerning money and habits, which is a very common reason for abuse occurrences. Risky hobbies such as gambling can turn into difficult addictions. It can make families lose savings and as a result destroy households. We obtained statistics for gambling that is also available for LGAs in Victoria from the Victorian Responsible Gambling Foundation website. Our visualisations based on the Victoria Police statistics prove that young and middle aged people are more likely to be involved in violent incidents than adolescent and senior persons. This can be due to a myriad of factors such as being desperate to win big with small money immediately.

The trial version of SAP made us to reinvent doing a number of things in Lumira. We faced a number of minor issues in presenting the data. This made us to search for information in SAP Lumira user guide.

In the crucial stages of finalizing data, we consolidated different data sets that provides data for family incidents and gambling statistics into a single excel sheet. The challenge here was the different data formats and the order of LGA listed in the data sets. Sorting them separately before consolidation and then grouping them by geographical sub-regions and then by geographical division of Victoria helped us to overcome the challenge.

In the final lecture of Business Analytics BCO6007, few videos that emphasized the power of data were shown. One of the videos was a google street view tour of the swimming pools in and around a US city that could be used to alert people for pool safety and the possibility of the fire service using it during water crisis. This gave us a very intriguing idea to use a GeoMap for the analysis. As we required more data, we gathered information of the distribution of gaming venues in Victoria. This was a great milestone and we were more excited to realize that the story can be more powerful, if we could demonstrate the relation by number of venues in a LGA and its ranking in family incident reports. After, basic visualization, it really proved our story. The number of venues relative to the size of the region do have an impact on the scale of domestic violence in the region. Bingo!  🙂 We were super excited!

Then there was a bigger test to get a GeoMap service running to create the visualization. Thanks to the Lumira user guide, we found that we could use Esri ArgGIS service. An online trial account worked like a charm. Hurrah, No scripting!

However, with the data in the venues data set, we could get a choropleth visualization that highlighted the area with more venues. This was not enough to give a clear picture of the impact of gambling on family violence. Now the key issue to tackle was how to apply the incomplete statistics, as only venue name and LGA were available. The process of searching addresses of 512 venues manually is very tedious and time-consuming, so we finalized only the geographical coordinates. We used the web service, batch geocoding that provides the co-ordinates for a list of venues. However, we could not get the coordinates for most venues, as there are no addresses. So we added the suburb name manually to each venue. Also, finally we had to do a VB script in excel that is referenced from policeanalyst.com. In the script, we made use of Cicero geocoding API which is a partner solution for Esri, to get the geographical coordinates the easier way.

After managing to get a datasheet for venues with geographical coordinates, we did the fun part of visualizing the data in Lumira. During the preparation of data, we found that in Lumira only two decimal points are shown as default for numbers. For latitude and longitude of venues, we had to change the setting to show up to 8 decimal points. In getting the right visualizations, we experimented with various alternatives in Lumira and chose the ones that best fits our analysis.

Figures 1, 2 below shows a potentially strong link between electronic gaming machine spending and the occurrence of family incidents in local government areas of Victoria. 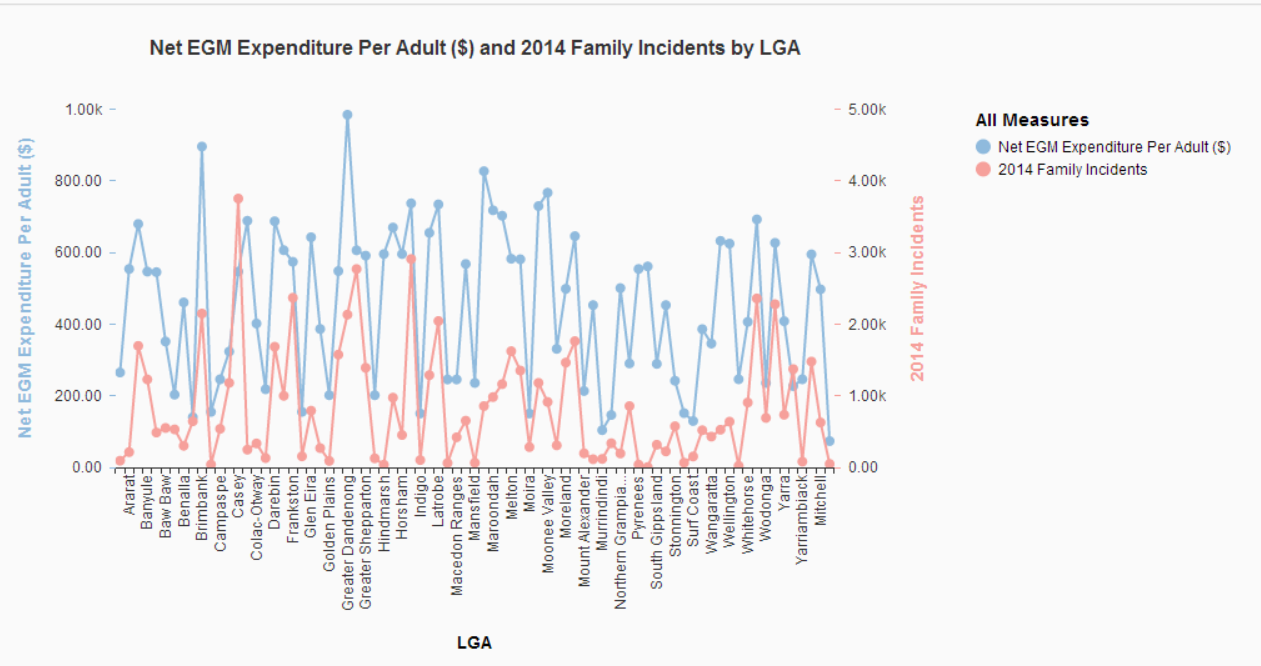 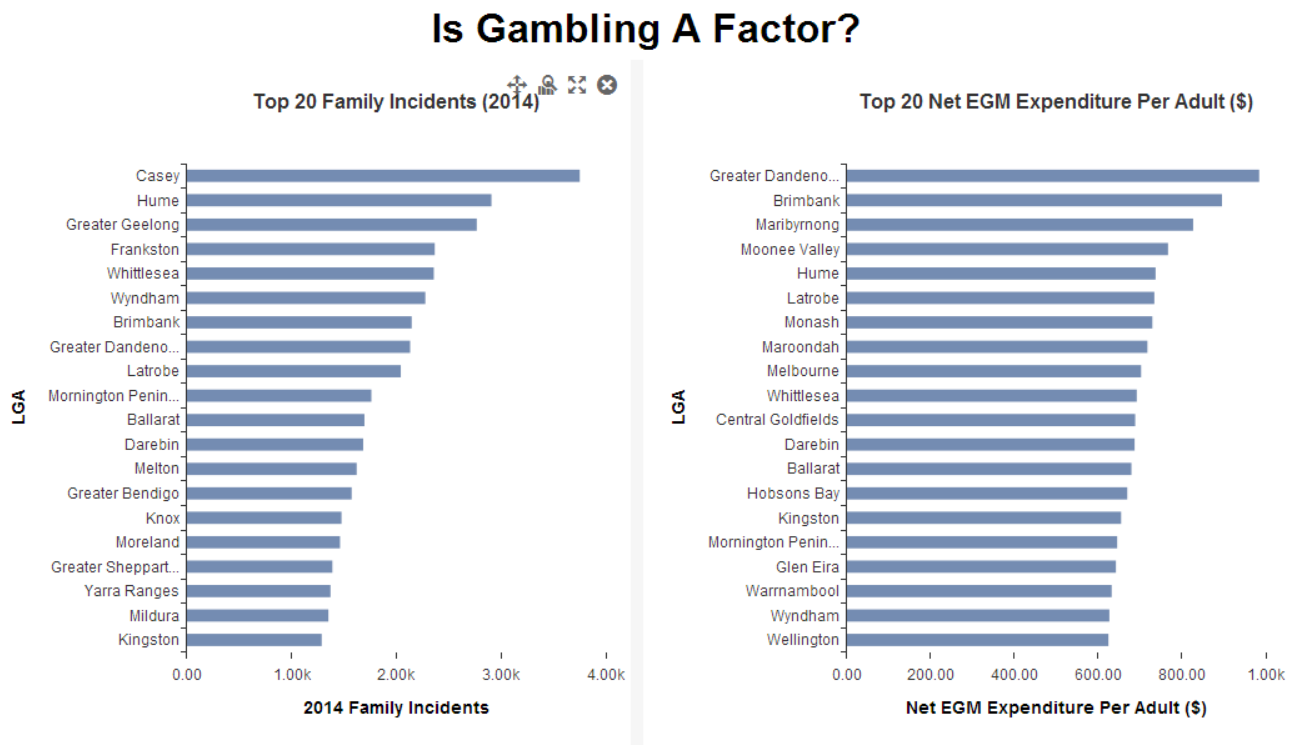 Figure 2: Ranking of LGAs in Victoria by Family abuse incidents (2014) and net EGM Expenditure per adult (2014)

Figure 3 below depicts the distribution of gaming venues across Victoria. 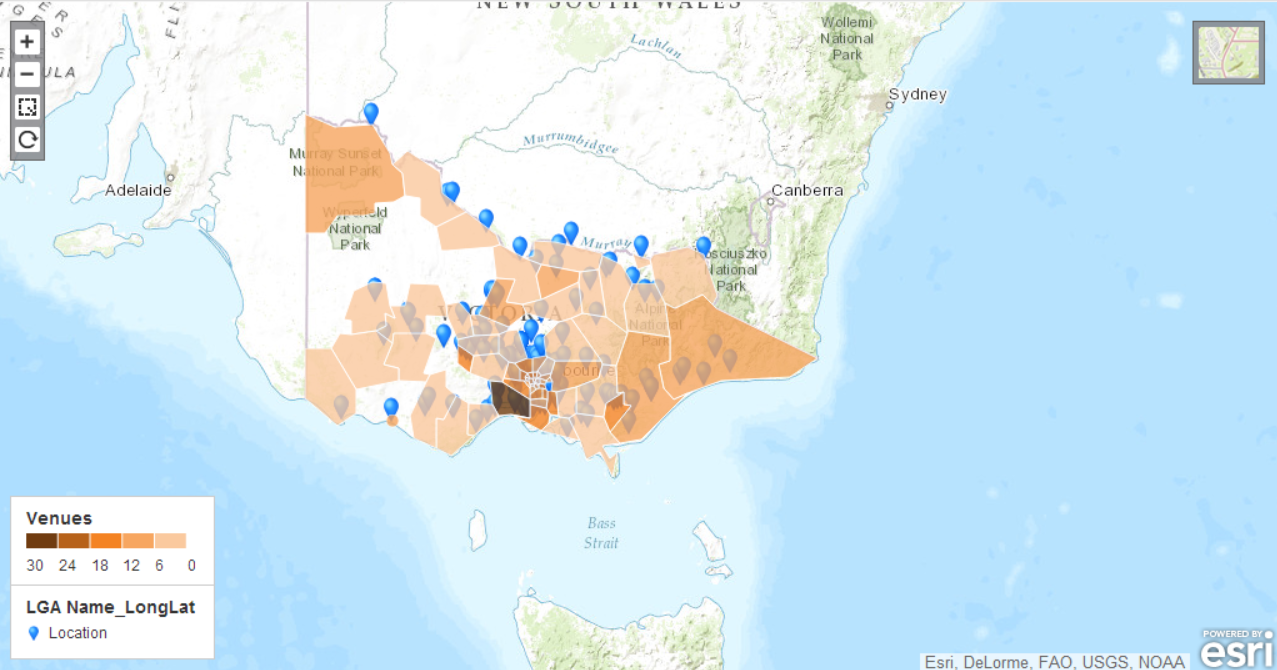 Self-exclusion is a popular solution for pathological gamblers where they can ban themselves from participating in gambling venues. A useful advice to all gamblers’ friends and family is to help engage the gambler in other leisure activities.

We learnt the importance of drill-down and delving into information that helps in concentrating on one story and thus, result in a coherent presentation. This involves robust appreciation of the relevant data and excluding information that is not necessary for the issue at hand.

Overall, this journey made us realize that we, as students of Master of Business Analytics can provide useful and unseen insights into the society. It can greatly affect the way how we view the world. This can assist in making a positive and profound impact on the policies in place for social, economic or business issues. Visualizations helps in effectively conveying message for very complex, nonfigurative or dispersed information. The prerequisite is the data should be of excellent quality that is complete, conclusive and precise.