For the past 3 odd months one word keeps buzzing around me here and there. In the cubicles, Over the coffee corners, or even in the all hands by big shots, I used to hear – ‘DevOps’ is coming. Some would say this is the ‘next’ big thing in software development cycle. Some would say it is the evolution of ‘agile’
while some would say it is a paradigm shift in how software will be produced.

Mostly I kept my mouth shut. Didn’t knew what DevOps is.

Somehow got lucky and got an opportunity to attend World DevOps Summit Bangalore 2015 organized by UNICOM on 29th may.

Few more colleagues were there and it was a great learning experience for me, as a beginner to the world of DevOps.

In this blog I would try to summarize my learnings from the conference.

Thanks for reading in advance.

It was great to see practices like Continuous Integration and testing as in our organization we are following them rigorously.

So we are following some of the concepts of  DevOps already 🙂

These 5Cs are the essence of DevOps

One important point that every speaker in the conference said and was a key take away is that Development and Operations are no longer separate entities. (or they should not be separate entities).

They need not to be merged but they definitely needs to be overlapped.

Even for that mater QA colleagues, Product owners, Product management every body needs to actively participate from the first phase of planning to last phase of monitoring the deployed software.

[ of course there are experts in respective areas which they should continue to be to, but an overlap of effort is required for a successful product ]

This requires a culture and mindset change but is essential.

Every body needs to have a ‘Shared Vision‘. This is like a basic principle of DevOps.

One important point Ramesh mentioned was the usefulness of Continuous Monitoring.

The metrics data whether as logs or in some visualization should have a business value. This is must.

Then only the first phase Planning can be improved. This brings limelight to Developer to have logs/dumps in such a way that can generate value. And also the Ops guy can now suggest how and what should go into logs which makes sense to generate value. You see it is a chain.

There is a dependency. Collaboration, Communication is the key.

The second session was a panel discussion, where Industry experts who are living DevOps discussed about the challenges and opportunities DevOps brings. It was more about balancing the 3 pillars of DevOps:

Mr. Narayanan Subramaniam, Principal Engineer, CISCO systems made a very important point of ‘Cross Skilling’.
He mentioned that Developers needs to be rotated to Operations and vice a versa.
Its important for a developer to get the system view to generate and understand metrics. (output of monitoring)
Ops needs to give feedback to dev.
Importantly — Education to product management is also required to prioritize backlog items (coz priorities will change with DevOps)

From the mindset/culture point of view 2 key points came out of discussion :

Third Session was by Mr. Rodrigo Gonzalez, CEO of Clarive Software Inc. He focused on Bimodal DevOps and how it can be effective when adopted in traditional settings.
Basically Bimodal IT, is a organization model for Enterprise IT, introduced by Gartner in 2014. It states that IT organizations of the future will have two separate flavors. Type 1 is traditional IT, focused on stability and efficiency and Type 2 is an experimental agile organization focused on time to market and rapid application evolution.

Gonzalez in his session talked about how DevOps will act as a bridge between these two types.

Frankly speaking this was a tough session and I couldn’t grasp most of the things. But yes some food for thought and keywords to Google out the details.

Fourth session was about – DevOps implementation in an ecommerce platform by Rajith Raveendranath of Huawei Technologies. He drew an analogy between game of Chess and DevOps and mentioned some of the ‘Book Moves’ for DevOps.
His focus was on how development teams can avoid commonly occurring ‘waste’.

Emphasized on User Acceptance Test (UTA) and not the smoke tests as a criteria for releasing the software.

For Operations, again the same word Communication was highlighted and the importance of educating Dev about Ops.

Next was an interesting session by IBM folks. They showed how Cloud Testing is done in ‘Production Environment’.
This was done using open source cloud testing tools developed by Netflix called The Simian Army. The tool allows users to test reliability, security, resiliency and recoverability of the cloud services.
In a nut shell The Simian Army consists of software agents called monkeys who attack the cloud services and are used to improve availability and reliability of the services.
For more information just Google out Netflix Simian Army.

In one of the session, there was an slide depicting DevOps principals.

It depicted 4 key areas of interaction between Dev and Ops. 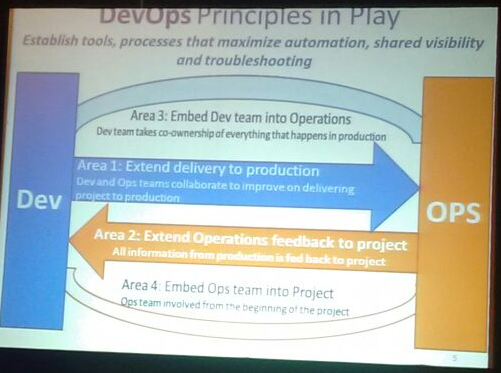 Some tools were also discussed for a successful DevOps. Tools that facilitates collaboration between Dev and Ops.
Most of the tools were completely new to me and I had never heard of them before like Chef and Puppet.
But then certain tools like Jenkins and GIT and Docker were also mentioned.

All in all it was a great experience, learnt something new and least I forget to mention, lunch was Awesome 🙂

P.S. There was a selfie contest (with props) and we took the below picture.  Yes, that’s Dhawal in between. 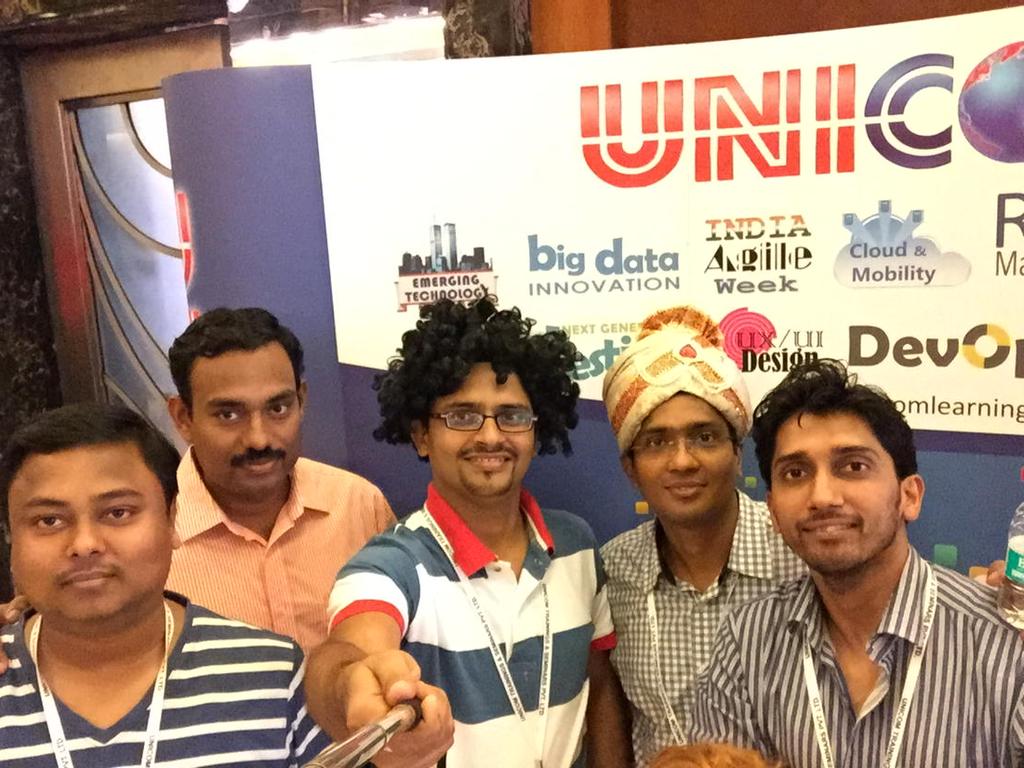 I am very glad that you had a great experience at the DevOps conference, I was introduced to this world about 4 years ago. As a way of working the concepts just make so much sense to me, especially that we have to work faster, in smaller teams and expected to do more. So the tight integration of Dev and Ops just makes it more sense, except that in the Enterprise world - this is not always the case with so many competing parties involved in the systems' lifecycle.

Personally I have found frustration in several areas

1. SAP is not DevOps friendly at first glance, for example

Automated testing is not practiced by many customers (for various reasons)

Continuous Integration and Deployment are difficult culturally, especially in outsourced        environments where SLAs and exposure to risk to providers is sought

3. People do not trust OpenSource software when working with SAP platforms - aka if it is     not rubberstamped by SAP, companies won't use it

Remember that DevOps grew from the OpenSource community, and unlike many OSS communities the DevOps world does not shy away from the Enterprise. Many of the biggest DevOps practitioners are companies like FaceBook, Google and HP - so remember that when someone tells you that DevOps is not Enterprise ready. Similarly, and you have noted this in your blog, DevOps is a philosophy which tries to empower people, break silos and make people responsible for both their job and be empathetic to the jobs of others.

That fact that it is a hot topic has meant that software vendors have jumped on it and are using it as a way to see more tools - be mindful of this as DevOps is very careful to balance tool deployment with culture. Tools cannot fix broken processes or culture.

If you wish to continue your education, I would recommend that you follow some of these people on Twitter

@patrickdeboisperhaps the originator of the term DevOps and lovely guy

@botchagalupe - leading light in DevOps community, has a focus on burnout ATM

@simonmcc - Good friend and experienced Ops guy who does development

One thing I have experienced within the DevOps community is a real sense of community and helping people - contribute to discussions, look at OpenSource toolkits they are advancing at a much faster rate than Enterprise products.

Good luck, as lots of questions, experiment as much as possible - fail fast (and safely)

Thanks a lot Chris for you encouraging and 'cautious' words. 🙂

I will keep in mind the points you have mentioned.

I think education is must in a new area and will definitely follow the DevOps Gurus on twitter.

Again thanks a ton for reading my blog.

I will get in touch with you also, if I need some help.

At last, our Selfie won the competition. Dhawal received a free entry pass into the Agile Summit.

Thanks for reading and appreciating it Abhra. Thats awesome news that our Selfie won the contest. 🙂

Thanks for taking the initiative to capture and share your First hand experience with DevOps here and it's great that knowingly or unknowingly we are already practicing it in our org unit.

I also liked the way you started your blog without being too formal. Now even I'm very excited to join you guys in any of such event.

I hope you already have planned a session for our All-Hands / TGIF open house.