Food Mashups: from cronuts to totchos

It might have started with the Frappuccino, the line of frozen coffee beverages sold by Starbucks. The term was coined as a combination of the words frappé (in Boston: a thick milkshake with ice cream) and cappuccino (in Italian: espresso coffee with frothed milk). While the 500+ calorie beverage was only introduced in 1995, it now represents $2B in revenue and more than 20% of Starbuck’s coffee sales.

While I wasn’t a fan of the drink, I was amused by the name – since I’m a fan of words, I liked that it was a portmanteau. Before Starbucks, the only other portmanteau food I had ever heard of was turducken; the turkey, duck, chicken hybrid.

And then two years ago, cronuts (croissants & donuts) stormed onto the scene. They were trendy and delicious. Amazingly, they are still popular. They’ve also spawned a legion of hybrid food portmanteaus:

Some of these sound like they would taste delicious and some – well – are creative names. It’s a smorgasbord of food mashups. You know, fashups.

This blog was originally posted on Manage by Walking Around on May 17, 2015. 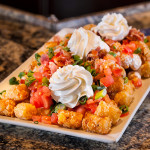