“Under the rule, two new same-day settlement windows will be added to the ACH Network, increasing the movement of funds between banks to three times each day. The rule also requires that all receiving depository financial institutions (RDFIs) receive same day transactions and provide faster funds availability to customers. To help RDFIs recover some of the costs of enabling and supporting same-day ACH transactions, the rule establishes the methodology for a same day entry fee.

There ended up being three key changes in the final vote, which reflects feedback from their request for comment (RFC) process. The morning same-day window was modified to allow for more time to process transactions, with settlement occurring at 1:00 p.m. ET. This new settlement time becomes effective in Phase 1 instead of Phase 3, as originally proposed. Next, the rule creates an option for an additional method for originating depository financial institutions (ODFIs) to use, at their discretion, with their originators to determine intent for same-day settlement. Lastly, there was an adjustment to the methodology for calculating the same day entry fee to exclude opportunity costs from its calculation, making the total cost 5.2 cents compared to the 8.2 cents in the initial proposal.”

How to set up your SAP System for Same Day ACH, 1 of 2

How to set up your SAP System for Same Day ACH, 2 of 2 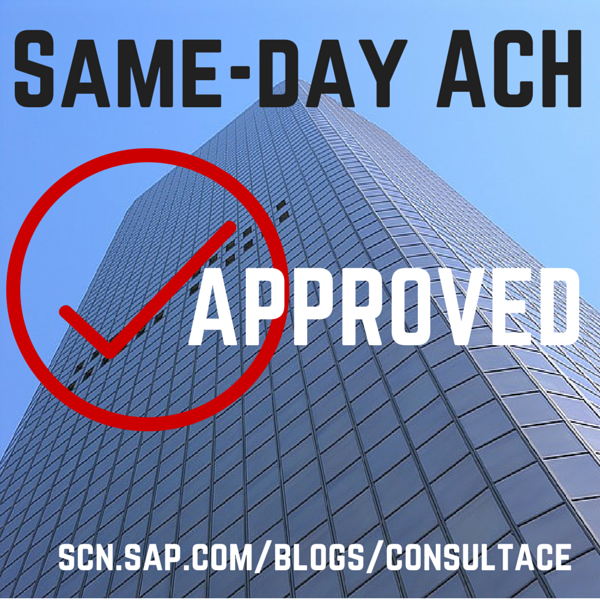