SAP consists for various transactions codes and data. Data are stored in the tables and the transaction codes have ABAP programs at the back end. Literal meaning of debugging is ,to make something(a program in current discussion) bug-free. But that is just one aspect of debugging.

Through debugging, we can analyze a program, understand the flow logic and most importantly find out the root cause to any issue .Although Debugging is the obvious task of an ABAP consultant, the debugging knowledge would be of great help to functional consultants. It will save their time for analysis and issue resolution , reduce over-dependence of ABAP team , help in effort estimation.

Let’s look at the different aspects of debugging. We will divide the discussion in to the below parts.

As functional consultants, we deal with many transaction codes and behind each transaction code, there is a ABAP source code. It can be either SAP delivered or customized code, written by ABAP consultant for specific need.

Debugging can be initiated in two ways.

a. Using /h command and executing the transaction.

b. Putting a break-point, at a particular line of the program and executing

As functional consultants , we would be mostly using the 1st option. The 2nd option is used, generally by ABAPers, where they want to see the behavior of a particular section of the code. Let’s see examples of each of the above mentioned methods.

a. Using /h command and executing the transactions

Below is the initial screen of a transaction.

First step is to use the command ‘/h’.

A message will be displayed in the bottom of the screen.

The resulting Screen will be as below. 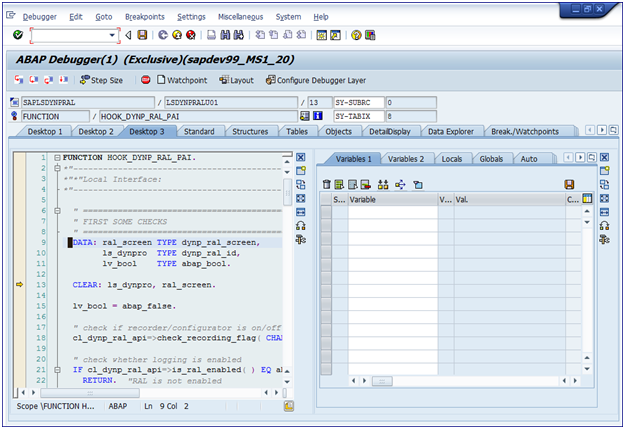 We can see the current control with the yellow arrow.

1. If any Break-point is there, the control will directly flow there.(Break-Points have been discussed in more detailed way in coming slides)

2. If no break-point is there, the debugging will end and the program will get executed.

b. Putting a break-point, at a particular line of the program and executing the transaction

This can be done by going in to the source code editor (SE38/37 etc.) and putting the break point at the desired line. Cursor can be put on the particular line , at which we need the control to stop and click on the break point button(highlighted in the below screenshot).This will create the breakpoint in the program.

When we execute the program, the control will go to that point and stop. Break-point is the point where the Program execution comes to a halt and from there on we can continue debugging or straight away execute the program , by pressing F8.

There are various ways, through which we can put a break-point in a program . Two mostly used ways are as below.

1. During Debugging the program

Lets discuss about each of the ways.

1. During Debugging of the program

During debugging break point can be put in two ways.

a. Jumping to a specific processing block

This is one of the important methods and by far the most useful for functional consultants.

Generally we tend to debug, when we encounter an error message. In that case, we can put the breakpoint, exactly at the point , where the error originated. And once we execute the program, that will take us straight to that point.

Let’s take an example of the current program. It takes the input as an AL11 path. The path must be a valid one. If we put an invalid one, it would ideally end in error. Suppose We encounter such an error, while executing the transaction in question.

Above is the initial screen and upon execution, we got the below error.

We start the debugging, by using /h and then, we put this message class and number in the debugging screen as mentioned in the following screenshot. 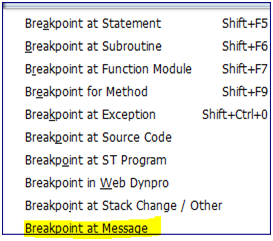 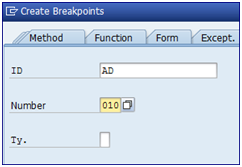 Now executing the program(F8) will take us to the exact point of error, where we can analyze the reason of the error. In this specific case, the IF statement below says, if the 1st two characters (OFILE_SAVE+0(2)) is not ‘\\’, then issue an error. The input that we provided in the selection screen started with ‘//’ , and hence it resulted in error. That’s how, we find out the reason of an error, in this method.

b. Using the stop icon, during debugging

Once the debugging screen appears, breakpoint can be put by using the highlighted breakpoint option.

This can be done by putting a breakpoint in the source code editor (SE38/37 etc.). When we execute the program, the control will go to that point and stop.

In SE38, Cursor can be put on the particular line , at which we need the control to stop and click on the break point button(highlighted in the below screenshot).

Next when we execute the program or transaction, the control stops at this point. 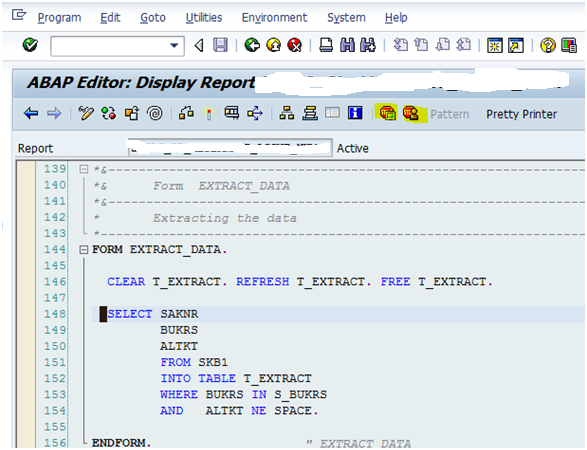 Given below are some general tips, suggestions and terminologies involved in debugging.

Below are few important parameters and terminologies with respect to debugging.

These were some basic information, which can be handy to the functional consultants. Debugging has far more aspects and we can explore more of them, as we continue to be involved in more of debugging. Your comments and suggestions are most welcome.