The configuration for the same is maintained in the below setting:

A screenshot of the configuration for the same is given below-

The on account posting key is maintained in the dialog box ‘ Define Posting Rules’:

The ‘on account posting key’ is primarily used in those cases where an Interpretation Algorithm is assigned to an External Transaction code.  The ‘on account posting key’ will be maintained against the posting rule defined for the Corresponding External Transaction Code that uses the Interpretation Algorithm.

Just to explain the above point with an example, the external transaction code NCOL uses Interpretation Algorithm 015:

So for the posting rule COL+ and RTI-(mapped to External Transaction code NCOL), we would maintain an ‘On Account Posting rule’ as shown below:

When an Interpretation Algorithm is mapped to an External Transaction Code, system expects an existing document in the system which would be cleared. However there might be cases when the document which has to be cleared does not exist in the system due to delay in posting or any other reason. In  such cases the ‘On Account Posting key’ is used.

When such a document(document to be cleared) is not found the system would still do a posting (but without clearing) with the Posting keys maintained in this column. This feature is very useful as it enables posting even when there is no corresponding document which has to be cleared. If not for this feature, the system would not do any posting as the logic works only on Post with Clearing basis and  the balance as per the Bank Statements would not have tallied with the main Bank Account (G/L), always leading to mismatch and bringing up the need for Reconciliation to tie the Main Bank account with the Bank Statement.

With this setup -when no document is found to be cleared, then system would post still post a document without clearing
using the ‘on account posting key’ maintained against the Posting Rule.

The concept of on account posting is explained with the help of an example below:

When FEBAN is accessed for that particular Bank Statement it looks as below: 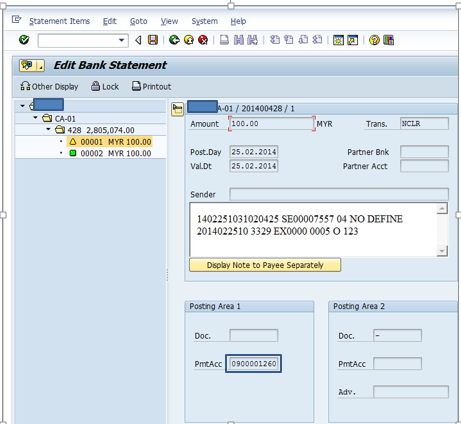 Such documents which could not have been cleared will have to be cleared manually subsequently.

An example of the FEBAN screen when a file which has been loaded  successfully cleared is shown below: 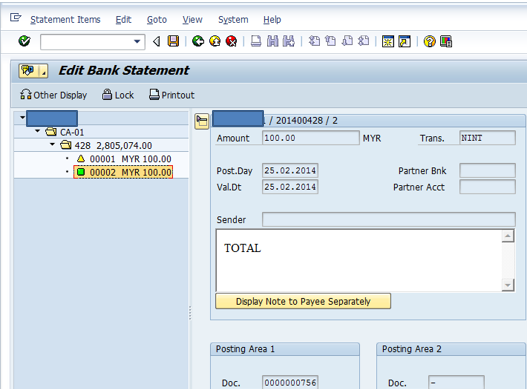 Thus we see that with the help of ‘On Account Posting key’ we can ensure that all postings are made to SAP even if system is not able to find a corresponding document to clear. This will ensure that the main account balance ties to the balance in the Bank statement(unless there is some configuration missing).

Thanks a lot for this wonderful document.  I found this functionality while going thru the config and was wondering how to use it.  Your this post came as a help in the nick of the time.

I still have one query in this.   When I use FF_5 with "Post immediately" radio button and use above functionality,  system posts the document on account without any issue.  I get the document number in

but if i use FF_5 with "Generate batch input" radio button,  then system fails to post the document and the batch runs in to error.  I tried to run the batch in foreground run.  System first tries to find out clearing document for the given document in bank statement.  Since there is no clearing document avaialble,  system just goes back to the opening screen of document selection for clearing and fetches all the documents available in the GL account.  and then the batch remains stuck there itself.

Will you please check and let me know how to go about it if one wants to use this fuctionality while doing batch generation under FF_5.  giving screnshots of my process:

System tries to selet documents for clearing the 01 gl: 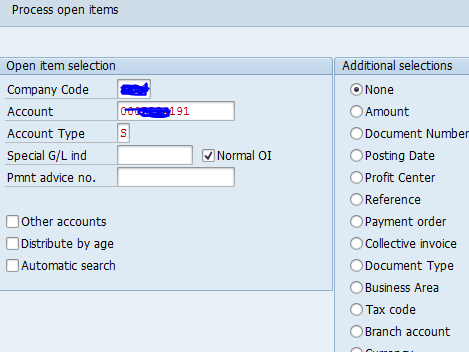 since the document is not posted,  system is unable to find the document and returns a message "no open items were found".   After this, the system shoould create a new line  using the posting key given in on account field.  But instead system goes back to above screen again and  bring following screen fetching all the documents in 01 ledger. 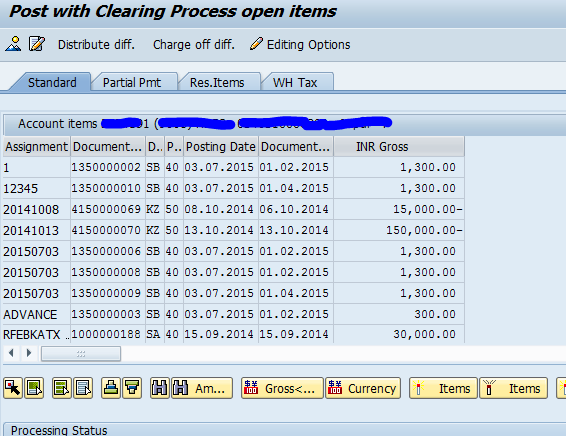 after this,  there is no other option but to terminate the batch processing.

I dont understand why the program which is working alright in direct post, fails to work in batch iinput generation.,

Following is the screenshot of FEBAN using direct post option 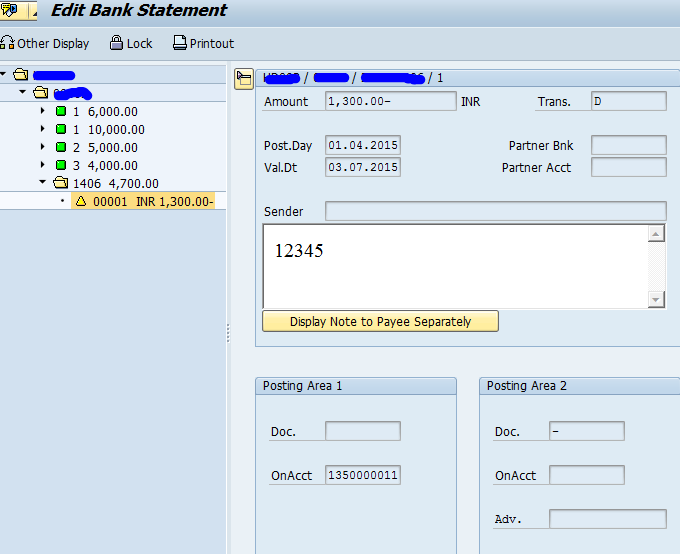 Please help me to find out reasons behind this functionality not working in batch input session.

Beautiful explanation. Thanks for sharing your knowledge.

"On account posting key" enables that postings are made to SAP when corresponding clearing document is not available in the system then what is the need of making posting ? Could you please clarify

amounts debited/credited directly by bank - if these are not booked before BRS is executed, then users enter this transaction manually while processing BRS in SM35 or using FEBAN.   if on account posting is enabled, this manual intervention is avoided.   BRS is posted smoothly without any pending transactions.  user can later on enter the actual bank debit/credit transaction and clear entry in 01/02 account manually.

Thank you so much for such a vivid, clear description. But we have a scenario in our company wherein the bank sends a line item without check information in their initial file and then the same line item with the check information in the next file or as and when they receive the check. Since, the system doesn't find a match during the first file upload, it gives an error while it clears the appropriately document when we load the next file ( or the file which contains the line item with the check information). I would like to know if including this configuration to that specific posting rule will help us avoiding system making such entries as on account one. Also, do you have any other suggestion for this scenario?

Great document indeed, but what if the posting rule is set to clear a subledger instead of a general ledger as in your example?

If the clearing of an incoming payment fails (due to document number and/or amount not matching) then how does SAP know on which account it should post the unmatched item? Will it e.g. try to lookup the customer:

- via the document number, if that was provided but the amount doesn't match

Some additional info about this scenario would be useful, thanks!