If we run the program SAP_QUERY_CHECKER_740 and we will get all the queries which are not supporting in BW 7.4 version.

Run the report SAP_QUERY_CHECKER_740. Better to Run it in background as it might run very long. The spool output shows the queries that will not run correctly in 740 any longer. We will get output somewhat like this…

The following features are discontinued in 740:

If we use Exception Aggregation, the following two points are important to know:

If the operation has to be calculated on a certain granularity, use formula exception aggregation to specify the granularity on which the formula is calculated.

Process chain steps loading hierarchies will failed. After upgrading to 740, when we load hierarchies using info packages, the loads fail when the info object doesn’t have a conversion exit defined. This is due to a Program error.

To resolve the issues we need to implement a SAP note 1912874 – CALL_FUNCTION_NOT_FOUND.

Activation of SICF services in  BW:-

During Upgrade, The Software Update Manager disables services of the Internet Communication Framework (ICF) for security reasons. Post upgrade SAP BW 7.4; Internet Communication Framework (ICF) services will be inactivated due to security reasons. The services needs to be activated on application-related basis only, and it can be done manually (Right click then Activate), They can be done manually by following the URL given in the error screen through transaction SICF.

In SICF Tcode…You can get most of the services needs to be activated post BW 7.4 upgrade under default host/sap/public and the tree will open.

If, for example, you want to activate services for the /SAP/public/icman URL, you have to activate the “default host” service tree in transaction SICF. After that, you must activate the individual “sap”, “public”, and “icman” services.

You can activate an ICF service as follows:

1. Select the ICF service in the ICF tree in transaction SICF.

2. You can then activate the service in one of the following ways:

b) Right-click to open the context menu and choose “Activate service”. 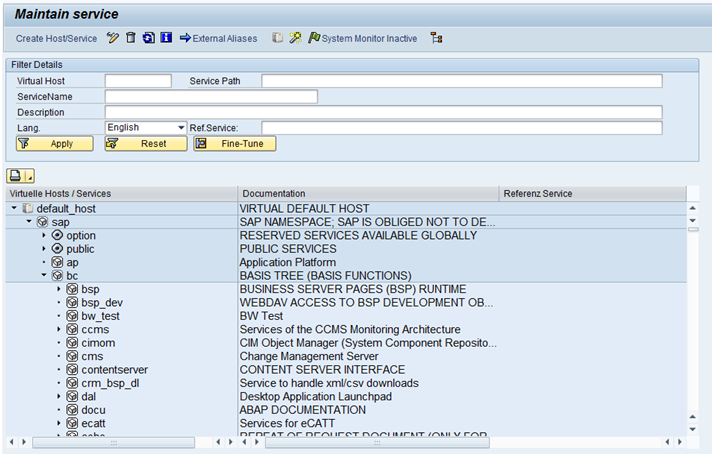 If the “default host” node is inactive in transaction SICF, the HTTP request produces a “RAISE_EXCEPTION” ABAP runtime error stating that the HOST_INACTIVE exception condition was triggered. If a service is inactive in the SICF transaction, the error text “Forbidden” is displayed when you access this service.

Some services that must be activate in the system . Depending on the operational scenario:

After you have installed SAP Web Application Server, you must ensure that this service is activated in transaction SICF.

We are going to face the issues in Metadata Repository, Maintain Master data etc. For this we need to active the services in BW. For example

Post upgrade we will find a lot of services which will be in inactive state .we need to activate them. In case of Metadata Repository we need to activate the services. 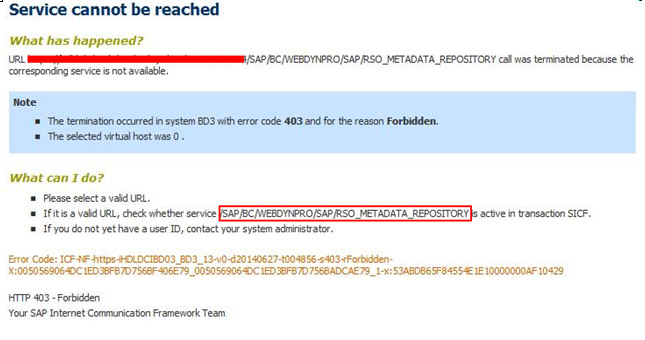 Some of the important services need to be activated as part of Post upgrade Checks.

With the message server

With the Web Dispatcher 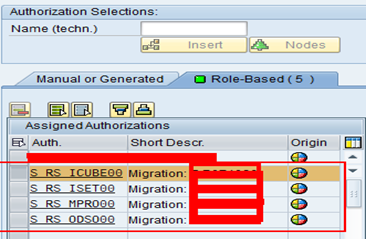 The info object which are Authorization relevant:

But in SAP BW 7.4 upgraded Version We have.

0BI_All:  Assign all Analysis Authorizations to a user. Which are equivalent to SAP_All in BI. It can be assigned directly via RSU01.

We can check (Characteristic Catalog) Table RSDCHA about the info object which are checked as Authorization Relevant.Whenever these info object are called in query output.User will not get the output if he is not authorized.

The Custom Authorization objects can be created and assigned to users. Exceptions are validity (0TCAVALID), Info Provider (0INFOPROV) and Activity (0TCAACTVT), which cannot be removed and always have to be authorization relevant.

Some of the Authorization issues faced after upgrade is with Semantic Partition and Writing ABAP Routines.

The available role with users should be modified with the object S_RS_LPOA to give required access. This is the Authorization object for working with semantically partitioned objects and their sub objects.

In case of writing Routines we will not Authorized.

We are busy testing a 7.4 on Hana upgrade and the information is very valuable.

We are upgrading from 7.3 Oracle  to 7.4 HANA. Do we need to do any security migration using RSEC_MIGRATION report?
How do i know if the authorization concept was moved to 730? Is there any indicator in SPRO/tcode?