In this edition of the Design Studio Innovation Series, I’m going to describe an approach for implementing a hierarchy filter based on standard and SDK Development Community components, to take advantage of complementary features of both.  With the standard functionality, we can implement cascading filters with the Dropdown Box and List Box components but neither of these cater for hierarchy structures, which is the requirement I will address here.

The solution allows compact, level-by-level hierarchical drill-down, with the option to drill back up level-by-level or go straight to the beginning.  Before going into the details, here’s the end result in the form of an animated gif (Click on the image if it doesn’t start playing immediately.  It may take a little bit of time to load).  In this example, the hierarchy filter is driving a chart:

For those of you who want to get straight to it, a sample BIAPP is attached at the end.  For those interested in the details, read on!…

This post was inspired by the Cascade Filter for Hierarchy Dimension question from Oscar Olivares Pous.  Since the requirement involved a fixed level hierarchy structure, I was able to propose a solution that relied only on standard functionality based on the Crosstab component.  A further thought then occurred to me about how could the solution be extended to achieve dynamic filtering for drilling down and up a hierarchy structure with many levels of varying depth, as shown below?:

We could certainly use a Crosstab component as-is, as shown above but this can become unwieldy as nodes are expanded and collapsed, with the added need for scrolling when the structure is large.  Similarly, use of the standard Dimension Filter also requires node manipulation and scrolling, with several clicks to find the required item and then back out to apply, as shown below: 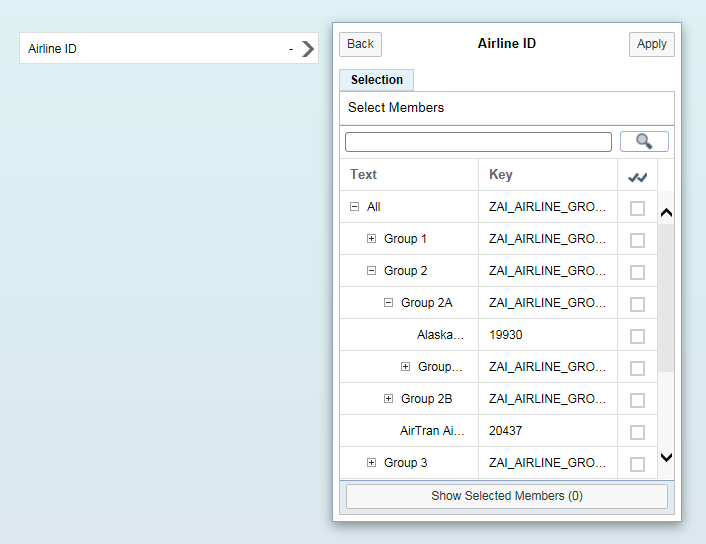 The solution is centred around a standard Crosstab component because unlike the Dropdown Box and List Box, it supports display of a hierarchy structure and selection of nodes.  Drilling down a hierarchy one level at a time by applying the setFilter() method on the data source assigned to a Crosstab is relatively straight forward.  However, the problem arises when we need to implement drill-up functionality to move back in the hierarchy.  The problem here is we need to somehow “remember” the drill path and parent-child relationships.  As far as I could see, there was no easy way to achieve this with standard scripting alone.  We need to store the drill path in some kind of structure that we can manipulate and look up, so I took a look at the Design Studio SDK: Collection Utility Component from the SDK Development Community as a possible candidate and it did the trick!

Note:  The Collection Utility component currently doesn’t seem to allow deletion of specific entries so all drill paths that the user traverses are stored the first time the user goes down a particular path.  I think a great enhancement to the Design Studio SDK: Collection Utility Component would be support for stack functionality with Push and Pop methods.  This would allow a more efficient mechanism for recording and traversing drill paths and only the current drill path would need to be tracked.

So now let’s go through a step-by-step breakdown.

In order to allow level-by-level drill-down, the Initial View of the main data source is configured as shown below, expanded to level 2: 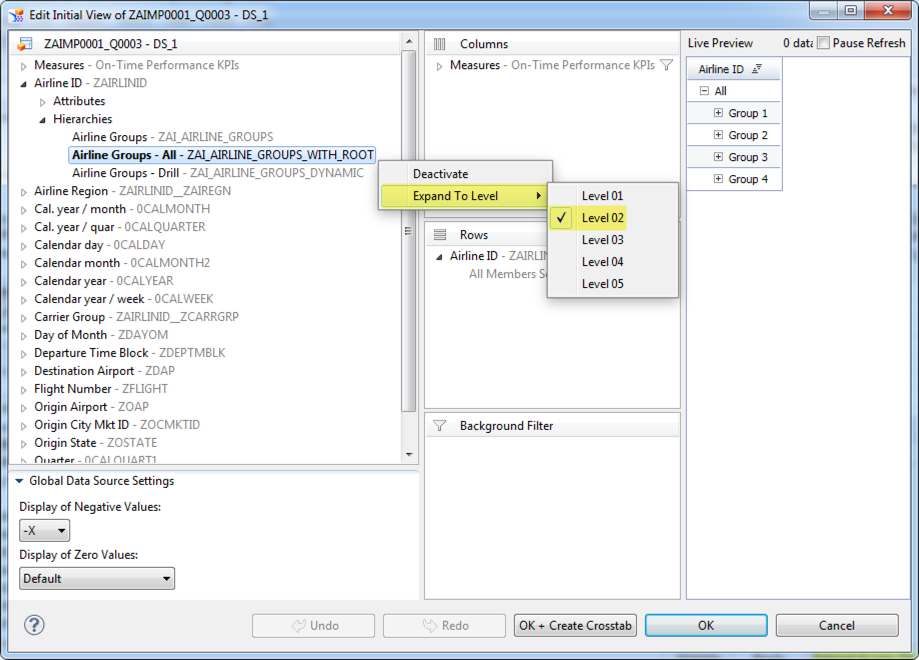 My aim was to implement a modular, reusable solution, so on the UI side I have effectively created a composite component by combining a Home Button, Back Button and Crosstab within a Panel component: 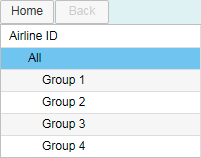 To track the drill path, I have I have used two collections implemented with the Design Studio SDK: Collection Utility Component:

I have adapted Haripriya Gopi’s very useful method for Default Selection in a Crosstab to implement the following functionality:

The CSS file for the application has been named defaultselection.css and consists of the following code:

The CSS file should be assigned to the Application Properties as shown below: 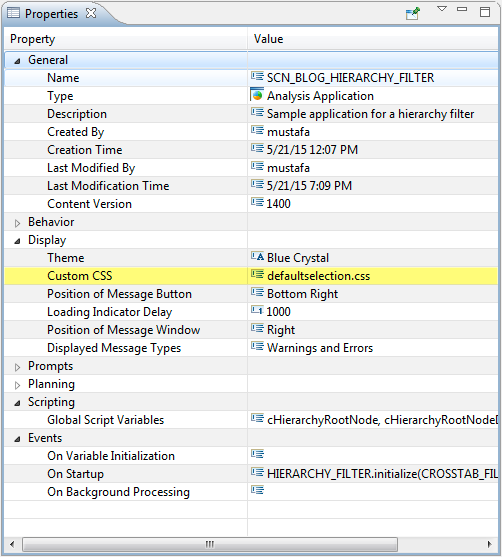 The CSS Class highlightrow should then be assigned to the Crosstab component as shown below: 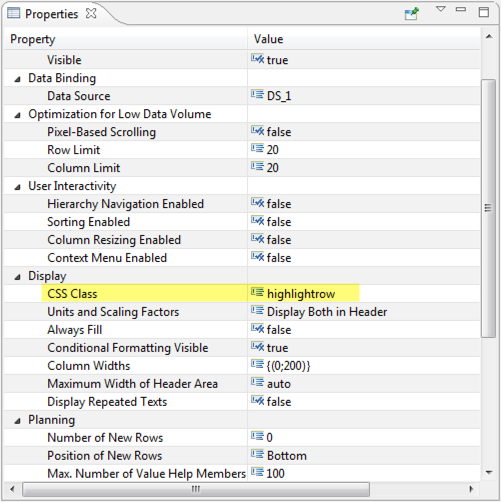 I have defined a set of constants as Global Script Variables so they can be maintained centrally, as shown below: 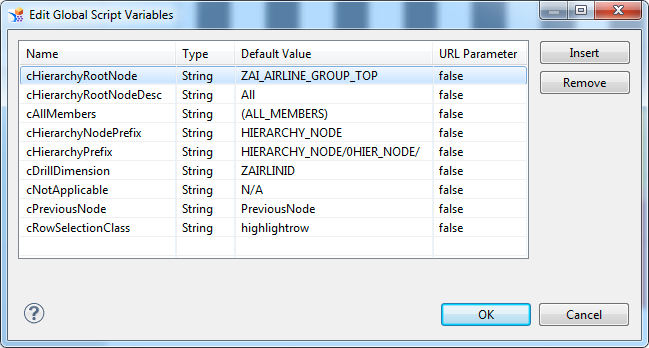 To keep the code modular, several script functions have been created under the HIERARCHY_FILTER global scripts object as shown below: Each of these functions are self-contained in that all necessary external data are passed as input parameters.  A great feature of global script functions is that you can even pass in components and data sources as parameters and then perform actions on these such as setting properties or filtering, so you can apply the same standard process to multiple components / data sources if needed.

I’ll now describe each of the functions in logical order.

This function is called from the “On Startup” event script of the application.  It performs the following main tasks:

This function is called from the “On Select” event script of the filter crosstab.  It is the engine of overall functionality and performs the following main tasks:

This function is called from the drillDown, back and home functions.  It performs the following main tasks:

This function is called from the “On Click” event script of the Back button.  It performs the following main tasks:

This function is called from the “On Click” event script of the Home button.  It performs the following main tasks:

I hope the hierarchy filter approach described here is useful for those of you who have such a requirement.  The BIAPP in the animated demo above is attached.

Comments and questions are welcome as always.