The University of Ibadan (UI) in Nigeria recently launched its first ES Fundamentals short course under the leadership of UI’s ESEFA coordinator Dr Victor Oladokun (from the Department of Industrial and Production Engineering).  ESEFA project team members from the Department of Information Systems at the University of Cape Town,  Associate Professor  Lisa Seymour (ESEFA Executive Sponsor) and Ms Tejumade Adeniran (ESEFA Project Administrator at UCT) flew to Nigeria to offer technical assistance and support for the week of 13th to 17th April.

From left to right: 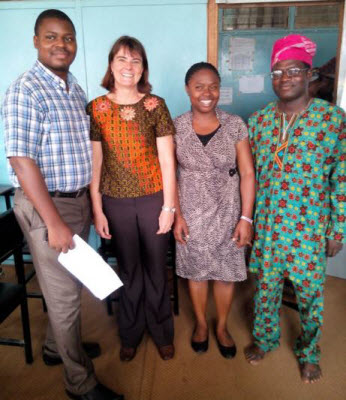 The short course enjoyed collaboration among eleven trainers from Departments of Industrial & Production Engineering, Computer Science and Agricultural Economics at UI. In total 17 postgraduate students (PhD and Masters) from the three Departments, as well as an additional four lecturers from the Department of Industrial and Production Engineering attended this first short course. The students as well as the trainers were excited to learn about and teach Enterprise Systems fundamentals. 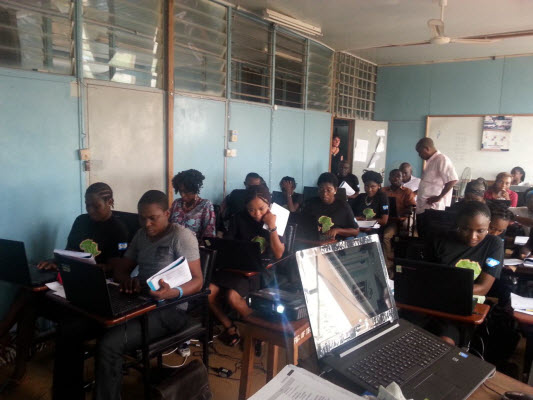 During the training the ESEFA team visited the office of the Vice-Chancellor Professor Isaac Adewole for a small ceremony whereby the SAP UA Certificates of Proficiency “Train the Trainer – ES Fundamentals with SAP’ were presented to the 11 lecturers that attended the ESEFA lecturer training  in November 2014.  With the additional 4 lecturers that qualified to teach ES Fundamentals to students in April 2015, the University of Ibadan now has 15 ESEFA qualified lecturers – the highest number out of all the ESEFA partner universities.

A second short course was given at UI the week thereafter from the 20th to 24th April where another 27 postgraduate students from the Departments of Agricultural Economics, Educational Management, Computer Science, Electrical Engineering, Agricultural & Environmental Engineering and Industrial & Production Engineering completed their ES Fundamentals training.