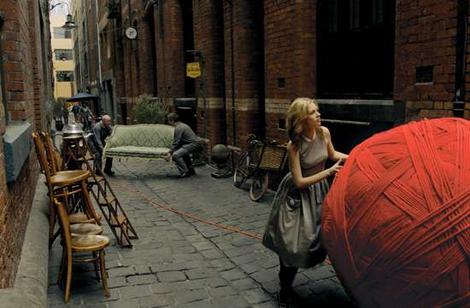 We’ll be Having a Ball (of wool)

Next week in Melbourne is the Mastering SAP Technology conference, kicking off with SAP Inside Track on the Sunday before the conference starts. I am flying out tomorrow lunchtime. This year the conference is co-located with the Mastering HR and Mastering Finance conferences, so it will be three times as big as usual, sort of an Australian mini-SAPPHIRE.

Melbourne has a very European nature for an Australian city, with tiny bars hidden in side streets (they don’t have signs, they hide themselves, you have to know in advance where they are) and trams including a mobile restaurant tram (just like in Heidelberg in Germany). It is also filled with women pushing enormous balls of wool through the streets.

I was asked at lunch this fine day “do you actually learn anything at these things?”. It has to be admitted – that is the perception of these events, and indeed of SAPPHIRE itself. They are viewed as a giant party in Las Vegas or Orlando or wherever – at your companies expense – where the delegates just party like there is no tomorrow and occasionally go to a presentation where someone from SAP try’s to sell you software you do not want or need.

Now there is no smoke without fire – there are huge parties (Oh I mean networking events) and in the real SAPPHIRE events pop concerts with Bon Jovi and the like. In the SAPPHIRE in Brisbane in 2003 the lead singer of INXS broke off singing and shouted at the audience “you are all nerds” which proves he at least knew what sort of event he was performing at.

And I would be the world’s biggest liar/hypocrite if I said I would not be at the drinking (networking) events on Sunday & Monday evenings. Last year Graham Robinson noted that the networking at the conference had been the best he had ever seen to which Martin English shouted out “I network like a fish”.

So, if that was all there was to it, people extorting money out of their employers, going to a party and claiming it was education/training, then eventually the employers would cotton on and such events would be no more. That has not happened – the Mastering SAP Technology event is in it’s tenth year, and SAPPHIRE has been going a lot longer.

Could it be that there is something useful in these things after all?

The first point I would make is that at the “Mastering” conference, and indeed to a large extent at “real” SAP conferences, most of the presenters are not SAP or a member of the “ecosystem” trying to sell you something but rather a bona fide SAP customer telling you the problems they have had and how they solved them (or more importantly failed to solve them) using SAP technology. People love to hear “warts and all” war stories – we all know no technology is perfect, we just laugh at salesmen who tell us it is, solves all your problems “out of the box” and takes just four weeks to install and go live “with not one line of code”.

The Eventful Group run focus groups in each state of Australia (and in New Zealand) where assorted (SAP using) companies say what their pain points are and where they are struggling to use technology to solve those business problems. Then there is a sort of democratic vote as to what the most pressing problems are. And then you get a bottle of wine. You can’t keep me away from such things, which is not to say the business challenges of my organisation are not real.

Thus a “hot list” of topics is drawn up and a call for speakers is made. Assorted people submit presentations that fit that list and these are voted upon by a peer group of people like me i.e. nothing to do with the company organising the conference. Thus the end result is that all the speakers are talking about topics that have been chosen by a popular vote, and their particular talk has been chosen by another voting process. The communists would be rolling in their graves.

The point here is that the resulting presentations are not adverts trying to sell you something at random. They are speeches by real people describing how they solved real world business problems – problems which other real people claim they have.

Life’s What You Make It

So far so good but here comes the important bit – last year it was stressed again and again that it is so easy to just stay in your comfort zone. You are there with three friends from your company, and you sit next to them at the presentations, and have the sandwiches with them at lunchtime, and drink with them in the evening, and never even talk to anyone else during the whole event.

Can you see the problem with that? You are bound to have some sort of problem you are fixing or new enhancement you are making, and unless you are the greatest genius the world has ever known you are bound to be struggling with this to some extent. Somewhere in the room is someone else –  maybe several somebodies – who have the exact same problem as you and they have solved one part of it and you have solved another part of it. And yet you never talk to each other even though they are only five feet away from you.

And that’s just the speakers. The actual other delegates are likely to be mines of information also if you could just bring yourself to have a chat with them.

Last year I was nice and hung over as usual and felt the need to sit down on a sort of sofa thing and put my head in my hands. Just then an Indian gentlemen recognised my name hanging from my name tag and sat down next to me and started asking questions about HANA. Now I don’t claim to know everything – or even that much – about HANA but it turned out I knew more than he did and was happy to tell him everything I did know.

The same applies this year – if you see me during the drinks or wandering around the booths collecting pens and yo-yos and fluffy toys, ask me about any of the nonsense I wrote about in my book ; ABAP 740, BOPF, BRF+, Monsters, whatever, I don’t mind.

Likewise that is what the SAP Mentors who are there are for also – people like Graham Robinson and what have you. There will be lots of SAP Mentors there and they are bursting to help you.

And indeed you may well be able to help the other delegates there – one of the themes from last year was “help yourself then help others” like what you hear on an airline in regard to oxygen masks. Naturally it is human nature to be self-focussed, so work with that – see if you can’t find the answers to your own problems, so you can justify the expense of coming back the next year, but once that is sorted, see if you can’t help out other people who have questions you can answer. Those two activities can be concurrent.

You do need to justify why you are there if someone is paying for you, and I make a little summary of what was useful out of each presentation I go to.

Last year you were encouraged to write on a post it note something like “I can use XYZ tip I just learned at work next week”, or even just the bullet points – there are usually only three core messages from each presentation, write them down if nothing else.

That way when your CIO asks you what you got out of it, you can actually present them with a list of information rather than saying “a big bag of toys and a huge hangover”.

So to hammer home the point, the key to success here is to get out of the comfort zone and talk to people you do not know. A lot of IT types hate this as in “if I wanted to talk to other human beings I would have not been a programmer” but give it a go.

That was a fairly incoherent stream of consciousness about what I think about SAP conferences, and I apologise if I went round in circles, but hopefully you get the point. In any event I hope next week to talk to a lot of people I do not know, and answer lots of questions, and learn new things myself.

Oh and I almost forgot!

Another vital part of going to any SAP conference is taking pictures of the dustbins/trash cans and posting those pictures on SCN.

There is a top secret contest about this each year, it is so top secret you never hear about it anywhere.

Last year SAP looked at all the various dustbin photographs throughout SCN blogs and the winner got a thousand billion dollars and a life sized gold plated model of Mount Everest (encrusted with diamonds) and all the fish they could eat.

Mind you this is a double edged sword as the loser has to pay a forfeit, which this year was to have to drink ten bottles of whiskey laced with LSD one after the other and then design a new SAP GUI theme and do all the coding for the same, all in ten minutes after finishing the last bottle, which is how we got the Blue Crystal Theme and the initial version of the SAP 740 GUI.