We are happy to announce the release of the latest version of the SDK for SMP and HCP Mobile Services, SMP SDK SP08.  The last version of the SDK already supports a wide range of capabilities including SAML Support, Usage collection and Offline APIs across iOS, Android (ARM), and Windows devices.  SP08 introduces a set of new features for native and hybrid development around developer experience, security & offline.

Let us start with a high level recap of the mobile SDK. 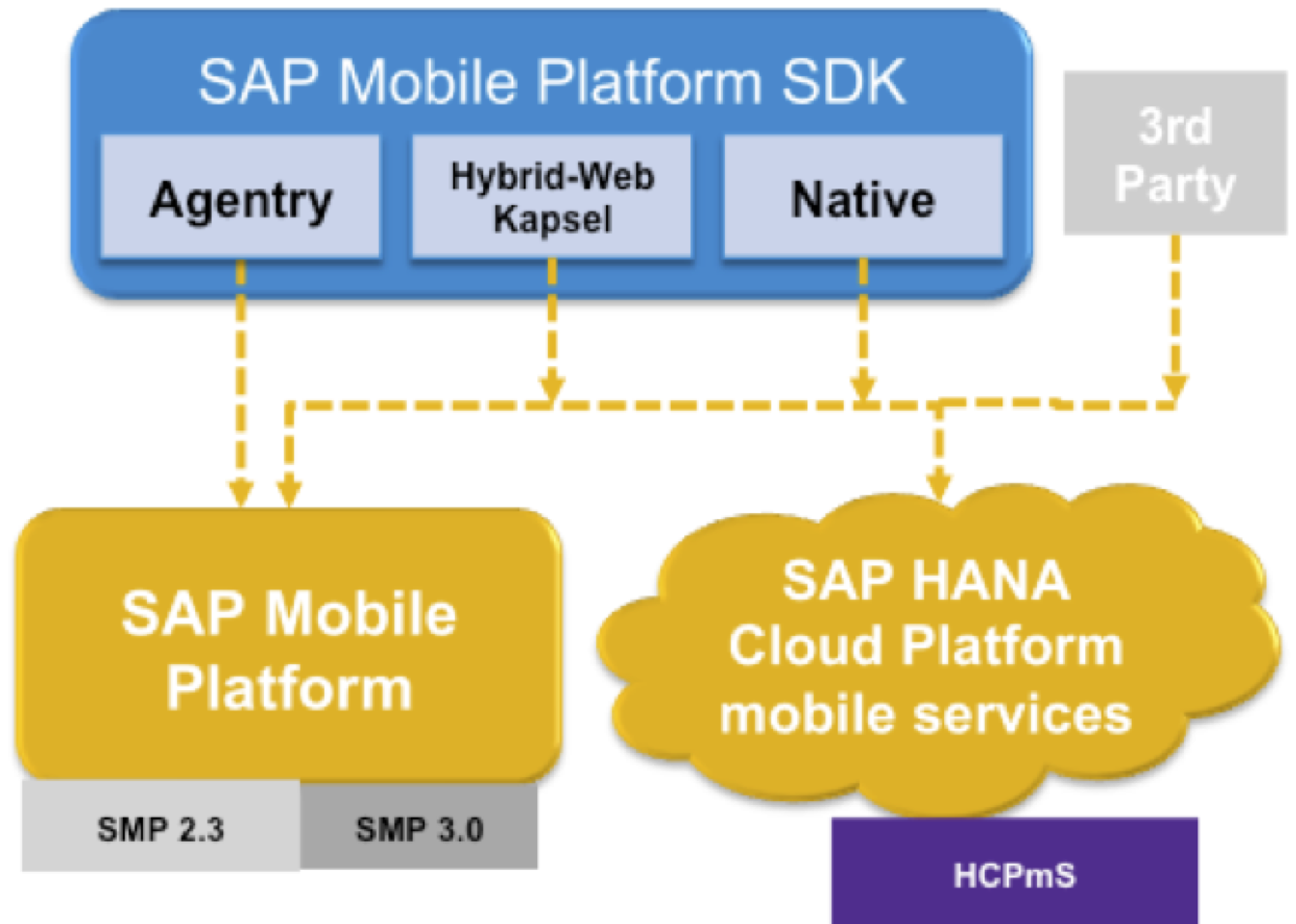 The figure above shows the different programming models that are available in the SDK (native, hybrid and agentry metadata) as well as different consumption paths (cloud, on premise) for platform services.

With every service pack release we focus on creating value in our SDK offering for the development community by addressing themes that are spread over the programming models and consumption paths. The focus themes in SDK SP08 were the following.

We took a close look at the experience of our developers and we are introducing a set of best practices in managing the SDK experience. The following are the specific improvements that will be available in SP08

By running a pod install command, the xcode project with all the sdk dependencies could be easily set up.

After installing new deploy.sh script is available under the appropriate OS folder. Through the execution of the script, all artifacts are deployed into the local Maven repository and using a pom.xml, it can be added to the xcode project

The new ApplicationSettings property of the LogonCore instance replaces the ConnectionData property on the RegistrationContext to access server application settings, allowing a common solution across multiple platforms and providing the following benefit:

Previous versions of Logon Manager supported HTTP-POST binding for getting redirected to the Identity Provider. The HTTP-REDIRECT binding is now also supported on iOS and Android. For more details on Http conversation manager and SAML redirects please refer to the following link http://scn.sap.com/community/developer-center/mobility-platform/blog/2014/11/14/request-response-challenge-filters-in-httpconversationmanager on the SAP Community Network Web site.

The Agentry Toolkit, which provides the components to create Agentry applications, is available in 64-bit format. The 32-bit version is no longer supported, or available for download. Links to the 32-bit download site have been removed from the documentation.

The screen-background feature is now available for the Agentry WPF client. (It was previously available only for Agentry Android, iOS, and legacy clients). This feature enables you to change the Screen Background Image, making it easier to distinguish between read-only, editable, and disabled fields on both transaction and non-transaction screens.

Clusters were introduced in 3.0 SP03, which changed how application and server configuration is managed in SAP Mobile Platform. Configuration values are now stored in the SAP Mobile Platform data store, and available to all server nodes. For Agentry, this means the Agentry.ini functionality is no longer needed in production.

Blog Post successfully moved from SAP for Mobile to SMP Developer Center as the more appropriate venue for this blog.

Hence if someone already shared the old URL won't work. That just happened in Twitter. If I am right this was not happening before or both URLs were working.

I tried to get it into the right community as soon after it was posted as I could so that would not happen.  The urls do change for blogs, but I had thought that there was a fix in place as others had been moved without impact.  My apologies for causing any problems.  This is the main reason why blogs more difficult to deal with than SCN Documents or Discussions.  They are tied tightly to the original community in which they are created.  Documents and Discussions are only loosely tied.  Their urls do not change after being moved from one community to another.

I think this is something to be managed by SCN. Something like maintaining both the URLs. That solves this problem.

See the email I sent to Kiran.  There are some other issues coming.

Very interesting set of features and appreciate the pace of innovation and releases.  One question which I have been trying to get an answer from various quarters in SAP to support our customers, is the way in which changes to Agentry.ini (formerly) and now the Management cockpit configuration for Agentry apps be transported across systems.  In the standard documentation, it is said not to package Agentry.ini file within the deployment archive when moving publishing the application to Production systems.  And now you have said "Configuration values are now stored in the SAP Mobile Platform data store".  So in a customer landscape how can we transport the configurations from SMP data store of SMP development server to SMP production server.  Appreciate if you can throw some light on this

One strategy is to have three different instances of your Agentry application.

QA testing (or pre-production staging) occurs in instance number 2.  This can be configured to be the same as your production environment.  Once satisfied with the functionality, the application is exported via the Management Cockpit.

we are not (yet) entitled for SMP SDK in Service Marketplace (can't see it under Installations & Upgrades --> A-Z --> M). Is there any chance that we'll see the SDK via the SAP Store?

I'd like to authenticate a Fiori client with user certificates to our FES. We don't have SMP or Afaria but do have MobileIron. Hence I'm looking if the new certificate provider interface that doesn't enforce Afaria and SMP would help in that.

Many thanks and kind regards

Do you know how to obtain the user name after onboarding to HCPms using kapsel logon plugin by SAML? Could you give me some advice?

Thanks for your reply, Kiran.

Before asking you, I have asked this problem to Daniel(the author of the blog you have proposed), he told me that SAML cannot return the user name to client.

Does SMP offer SAML for SSO for Agentry based applications, for instance Sales Manager (agentry app) deployed on SMP 3.0 SP7 ? Sorry If missed reading all the content if this was mentioned. Do we have to still rely on SAP portal for SSO with JAAS  custom login module ? Any guidance would be highly appreciated.

Regarding needing the Portal, as I understand it Agentry should be able to take advantage of the new option in SP08 so portal wouldn't be needed but I have not have time to fully investigate and test yet myself.

Please create a new Discussion marked as a Question.  The Comments section of a Blog (or Document) is not the right vehicle for asking questions as the results are not easily searchable.  Once your issue is solved, a Discussion with the solution (and marked with Correct Answer) makes the results visible to others experiencing a similar problem.  If a blog or document is related, put in a link.

I am getting some issue in HOT DEPLOYMENT. can you please suggest me the step for hot deployment?