A look back on Orlando

There have been numerous interesting posts in this space written by first time attendees to SAPPHIRE Now and the co-located ASUG Annual Conference, and if you have not read them yet, I especially encourage you to check out the posts by Jelena Perfiljeva and Matt Harding . In contrast, I have been attending the ASUG Annual Conference since the late 90s, so this is  just a warning that I have no fresh perspective to offer. Instead, I would like to share highlights of my experiences this year with some observations about the changing nature of this event over the years.

The day before the actual start of ASUG/SAPPHIRE, quite a few events take place. The ASUG pre-conference sessions are always well-received; unfortunately for me, there has never been one offered on a security or GRC-related topic, so I have never attended, but I keep hearing great things from attendees and continue to hope. Instead, I attended the Women’s Leadership Summit, co-sponsored by SAP and PwC. (Disclosure note: I was previously a consultant with PwC’s GRC and Security practice.) While this was my first time to attend it, this was the second year for this event, and the program included panel discussions and other presenters.  I particularly enjoyed the panel which included Jennifer Morgan, President of SAP North America, and Niloufar Moulani, PwC partner from Houston.  The final session of the afternoon was Bill McDermott being interviewed by one of his co- Chiefs of staff, Vanessa Smith. Bill’s remarks were short and on point, a perfect ending to the day’s presentations. 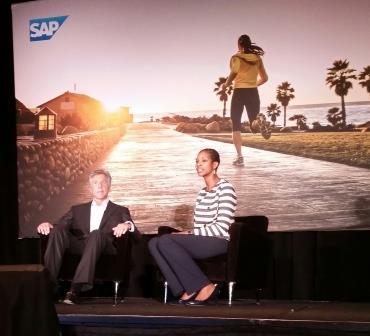 In contrast to those short and sweet remarks, there were the keynotes….

I attend the conferences primarily for the ASUG education; hearing what other customers are doing with today’s solutions is the main value for me. Keynotes exhorting me to buy, buy, buy are way overkill and time that could have been better spent in more practical learning opportunities.  I did enjoy Bernd Leukert’s keynote on Wednesday morning; the SAP customers talking about their projects gave it a healthy injection of real world perspective, particularly when Walmart’s CIO, Karenann Terrell, issued her challenge to SAP that they finish the SAP  S/4 HANA implementation some time during *her* lifetime at Walmart.  That had to have been my favorite moment of any of the keynotes. While the Concur demo was interesting, I don’t see my organization implementing it any time soon, and that is really my problem with the keynotes: too many keynotes and too much time spent talking about solutions too far out into the future for me and my organization.

I also enjoyed Michael Strahan’s remarks during the ASUG keynote. Coming from a modest background, he has been very successful and had a lot of great memories to share from his NFL career and his later career in television. It was also nice that he called out the ASUG volunteers, sitting together and (mostly) wearing the new blue sweaters with the ASUG logo.

In my opinion, the job done by ASUG’s Program Committee volunteers gets more challenging with each passing year. Back in the day when I was on that committee, each Special Interest Group (SIG) was assigned a room and could offer a full track of sessions. In addition there were several rooms dedicated to Influence Council sessions. Fast forward to 2015, and with SAP’s solution offerings greatly expanded and the ASUG education program shrunken considerably, each SIG is lucky to get 4 to 6 time slots for education, and Influence was relegated to small and noisy theatres on the show floor. The security SIG sessions I attended were very well done, with customer presenters and with speakers from SAP.  I particularly enjoyed the look at new features of PFCG demo’ed by Regine Schimmer in session BT1408, as well as the remarks by Chris Radkowski concerning security for SuccessFactors in session BT2000.  The customer case study I attended, BT82 presented by Sage Wagner, focused on use of standard SAP workflows for role provisioning, an unusual use case. You can always count on customer case studies for  a fresh look at current solutions/ releases.

I was glad to be able to attend the meeting where new SAP Mentors were welcomed into the fold. It was also great to meet with some students from the SAP University Alliance program at that meeting, as well as reconnect with long time Mentor colleagues. While it seemed strange that Mark Finnern was not in his longtime role of Chief Mentor Herder, the new leadership team was enthusiastic and welcoming. My schedule only allowed me to attend one other meeting, where the Solution Manager roadmap was discussed.  Since I have done security in SolMan, the discussion was interesting to me, even though a lot of the details went over my head.

While others have commented on the vastness of the show floor, I wanted to share a look at the octagon display which was very striking. See the embedded video.

There is so much on offer at the co-located conferences that it is on the attendee to make the most of his/her time there by making good choices among the competing opportunities. As long as the attendees keep in mind that ASUG sessions and SAPPHIRE Now sessions have completely different objectives, and care is taken to attend the kind of sessions that will meet your objective, you will come away feeling that your time was well spent.