A First-Timer’s Impressions of SAPPHIRE and ASUG

What a year 2015 is turning out to be so far. Momentous events all around, but two I must highlight are my first time attending SAPPHIRE/ASUG (oh wait, that’s supposed to be “SAPPHIRE NOW Co-located with ASUG Annual Conference 2015,” but let’s all agree that this is a bit of a mouthful to keep repeating), and being nominated for and selected to become a new SAP Mentor. These may seem like two disparate events, but for me, this past week, they were inseparably intertwined.

This year, we sent eight to SAPPHIRE. Half were from IT, half from our business units. To say that we are ramping up could be seen as an understatement.

On arrival, Monday evening, I wandered about a bit to orient myself, enjoying the warm (but not yet oppressively humid) Florida weather. Sunset over the Hyatt tower, as seen from the walkway between the Hilton and the conference center, gave me a favorable first impression. 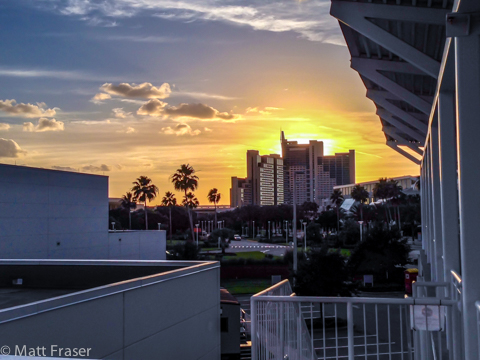 My first event was a reception for the Mentors that evening in the Hilton, at which the new inductees were… ahem… initiated. First rule of SAP Mentors: you don’t talk about the initiation rites of SAP Mentors. However, it’s not hard to figure out from various posts how that went down. For those who were there, here are the lyrics: The ABAPer’s Holiday Carol. I will say the welcome was warm, and bonds formed quickly with many of those present. Getting a hug from the inimitable Jelena Perfiljeva upon arrival set the tone for all that was to follow. Meeting so many of those I had previously only known through these pages was the highlight of the week for me.

Martin Gillet was a photographing machine, taking many of the memorable photos throughout the week. He carried with him everywhere a “Twitter Card” frame — perhaps you saw it? Here we see Aiaz Kazi, who dropped by the reception, posing with Susan Keohan and Gretchen Lindquist (picture is my own; Martin’s was infinitely superior). 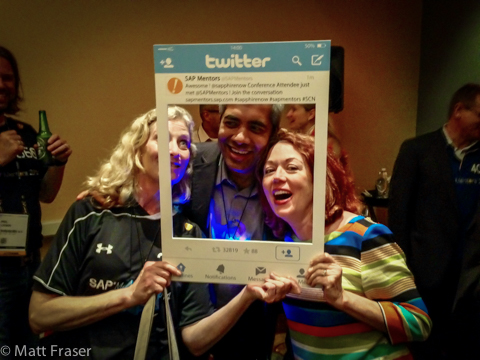 Next morning the conference started in earnest, with a very busy schedule. If you haven’t been to the Orange County Convention Center before, let me just say, this place is huge. You definitely need to plan for enough time to get between events, especially if half of them are actually in the semi-connected Hilton Hotel. 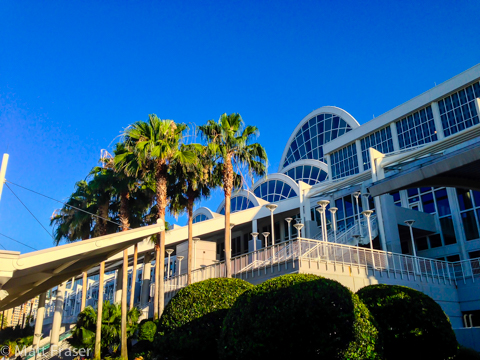 Plan for a lot of walking, and take the advice of wearing comfortable shoes seriously. I thought I had that last part down, but my shoes were too new, not really flexible enough, and before Day 1 was out I needed bandages to keep from limping everywhere.

Inside, the first big event was Bill McDermott’s keynote on the theme “Run Simple.” Finding a seat for this was anything but simple. Well before Bill began speaking it was standing-room-only at the back of the theater. 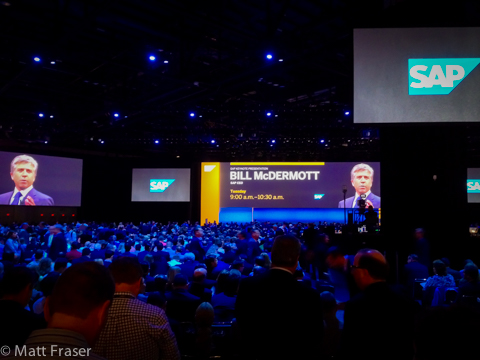 I found the Keynote Theater to be an interesting place, with the muted blue lighting scheme. Obviously, during speeches, the layout served to focus attention upon the stage and the presentations. However, much of the rest of the time, when it was empty and blue-dark yet surrounded by brightly lit hubs of activity, it gave the impression of a deep well into which one could fall and become lost if you happened to stray too close. Perhaps it’s my nature, but at various times throughout the week it would draw my eye, and if nothing else the darkness there served as a landmark, helping me to orient myself within the main floor.

The main floor, on the other hand, was a dimly lit sea of brightly colored islands, with a starscape of lights overhead. Traffic flowed continuously between these islands, and within their circles of light people buzzed about, attending demos and microforums and hubs of industry or line of business expertise, or visiting the many partners present. 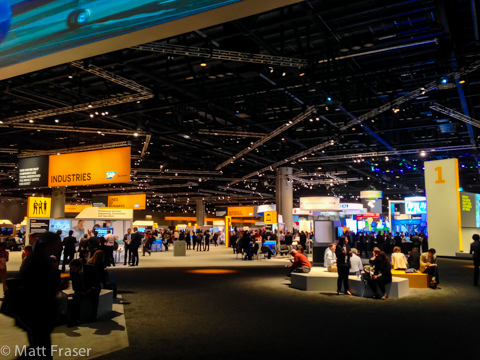 SAP and partner exhibits were clearly delineated by color scheme and location, so it was always clear to whom you were speaking. I found the lighting to be very easy on the eye, such that despite the constant buzz of activity and background noise, the floor was an oddly peaceful place. Toward the front, opposite the Keynote Theater, was the “Experience Zone,” a large octagonal area anchored by a large world map across the floor, with shipping and air traffic between global hubs actively displayed in some many-times-multiple of realtime. Just watching the small blips representing a plane or ship move across the map became a bit like a Zen exercise, allowing the mind some time out to process the extreme influx of information coming at it throughout the week.

After the Tuesday morning Keynote, I made my way toward my first planned ASUG session, a customer story about implementing Fiori and Personas that I thought would be relevant for my employer’s plans. This being the first full day, I gave myself extra time to locate the lecture room, then sat outside enjoying a coffee and chatting. A few minutes before start time, I got up and approached the entrance, only to see them close the doors and put a “Session Full” sign out front. Oops! There goes my carefully planned agenda! I noticed the room immediately next door also had a Fiori presentation and was not full, so I quickly ducked into that, while wondering if this was going to be the game all week (it wasn’t — I didn’t encounter any “Full” signs again, though some sessions were quite well-attended).

After lunch I made my way back to the Hilton for a Mentor meeting with Marc Thier. This was to be a pattern throughout the week, back and forth between the conference center for “regular” sessions and the Hilton for Mentor sessions. Although the conference center and the Hilton are connected via a covered walkway, it’s still a good ten-minute walk from the main show floor to the Mentor meeting room in the Hilton. I figure this helped even out the calorie intake from the large dinners all week (not quite, but at least it slowed down the, ahem, growth around the middle).

I made it a point to attend different types of sessions throughout the week. One of the most promising formats was the microforum, small and short highly-focused topic discussions, up close and personal with the topic expert, with just a handful of attendees. These were located at the various industry and line of business exhibits on the show floor. At the first of these I attended, about countering security threats with SAP’s new Enterprise Threat Detection tool, I found it very difficult to hear the presenter due to all the background noise from the rest of the floor. I had vainly hoped the slightly parabolic shape of the exhibit would amplify the speaker’s voice, but it didn’t work that way. Later in the week I noticed that the presenters mostly had set up small amplifiers and used microphones, which improved the situation, though of course also added to the overall noise for everyone else. However, if the intent of the microforums was to engender discussion, then that was not as successful as it could have been, as it wasn’t easy for attendees to hear each other.

Tuesday evening I went to a sponsored dinner at Fogo de Chao for State and Local Government and Education. This was a very well-attended dinner, at which it was entirely too easy to overeat. In attempting to connect with my colleagues for travel to the dinner, some of whom could receive text messages and some of whom could not, this was when I first thought that the conference smartphone app really needed a Find My Friends feature. So — that’s my feature request for the app next time, ok? Otherwise, the iBeacon feature in the conference map worked like a charm, helping to pinpoint my location inside the conference center, and even providing guided walking directions to exhibits and rooms. While the app was not perfect, I found it far easier to keep track of my agenda and find my way around than carrying lots of printed materials.

Wednesday began with a K-12 Industry breakfast at which we learned a great deal about Fulton County Schools’ implementation of Public Budget Formulation. Unfortunately the speaker from the school district, who was clearly very enthusiastic about the success of their implementation, went overtime and we all ended up being late to Bernd Leukert’s keynote. When I arrived, I found Bernd hadn’t started yet, and instead a string trio were playing on stage. 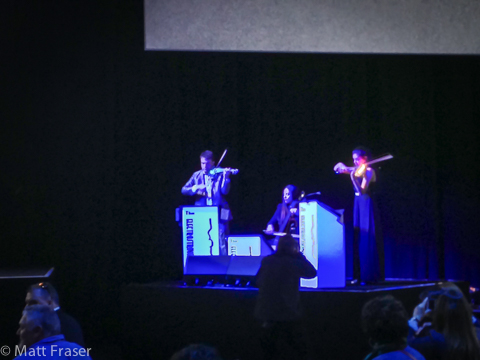 Surprisingly, the seats were not all taken this time, but still it was difficult to find a good seat. I found myself sitting far off to one side, and half the time my view was obstructed by a large camera boom moving around for dynamic shots, or presumably video. I never did see any screen displaying anything that looked like what that camera was shooting, so it’s a mystery to me what it was for. 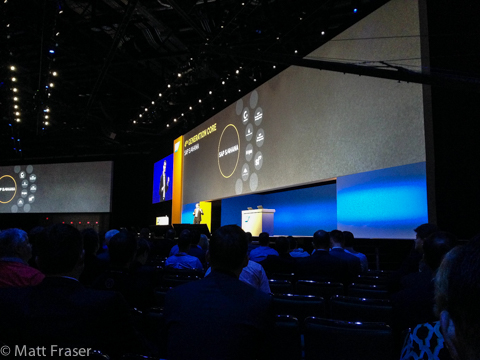 This was to be the case for Hasso Platner’s keynote on Thursday, as well, except at least I had the good sense to sit on the other far side instead, away from that camera boom.

Wednesday and Thursday were much like Tuesday, a mix of Mentor sessions, ASUG sessions, keynotes, and time on the show floor. Wednesday evening was the night of the industry receptions, with each of the various ballrooms at the Hilton dedicated to a different industry. Except for the media analysts: they had what appeared to be a very swanky party outside in the courtyard, with live music and fancy fireplaces, and as the rest of us were shuffled out of our ballrooms their party was still in full swing. No, I’m not jealous. Really.

I did not attend all of the Mentor sessions — doing so would have meant I would never get out of the Hilton! I did attend several, however, and the opportunity to sit down in a small group and have a frank Q&A discussion with SAP executives in charge of various initiatives was eye-opening. It quickly became clear to me that these executives value the relationship they have with the Mentors, taking the feedback they receive quite seriously, and talking quite openly with us. I learned more about S/4HANA, for instance, in those Q&As than I did from any event in the actual conference center, and on that initiative, at least, where before I had been ambivalent, now I’m starting to come around to thinking this is a good idea after all. I want to specifically thank Marc Thier, Ingrid VanDenHoogen, Thomas Grassl, Steve Lucas, Sam Yen, and Irfan Khan, as well as the others whose sessions unfortunately I was not able to attend, for coming to speak with us. As a new “wolf cub” with the Mentors, I didn’t speak up much, instead just soaking it all in, but I’m grateful for that opportunity.

Of course, the conference wrapped up with J Lo in concert, as everyone knows. Yes, I tried to take some photos of the concert itself, but they came out fuzzy at best, so I’ll leave those to the professionals. Pre-concert, however, the Mentors were in perfect form, engrossed in their smartphones, no doubt blogging and tweeting away furiously. 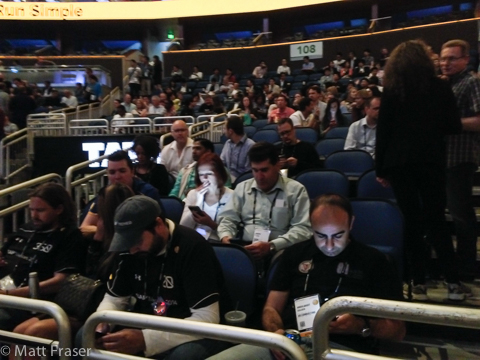 And the last word goes to Marilyn Pratt, gracious as always, with a ready smile for all and sundry. She needs no introduction from me. 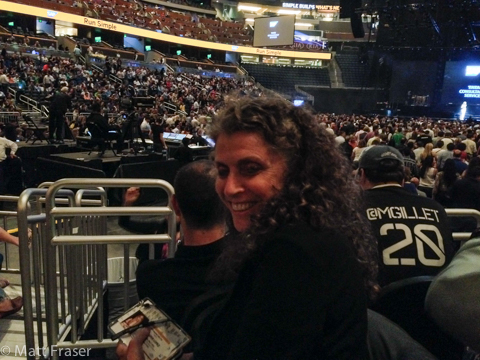