One Day I Will Find …

Three days of fun ? and not much sun in Orlando

Today is hump day at the ASUG Annual Conference/Sapphire, and that should mean a reduction in the check list of “things to do”. That’s the theory, right? Well, I was able to attend more of the sessions in my plan today than in my plan yesterday, and I’ve met with most of the vendors on my short list, and I have made to a couple SAP Mentor meetings. But, like a Hydra, for every action item ticked off, you get two more to dos.  So today is more like a Too Day than a Done day.

Instead of a keynote seat, I sat in on a conference call for work, basic office messaging, and tried to fine tune the conference plan to a degree.  Look – I have a free hour today!

And for the first time in my recollection – septuple booked. 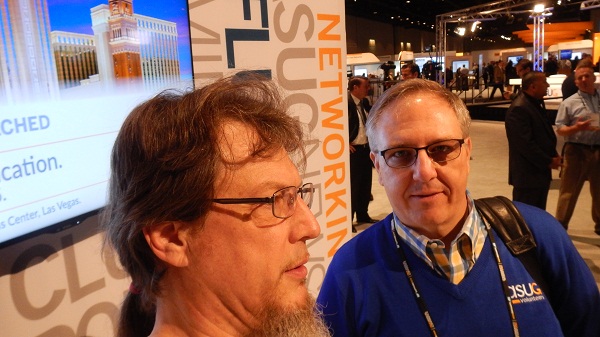 Between the keynote and the first scheduled session of the day, I stopped at the ASUG booth to help out.  There I met Greg Capps, good friend and fellow volunteer, and one of the sunniest dispositions anyone could have.  I contributed a few pointers about ASUG membership, managing webcasts, and chatted with our ASUH HQ contact person Kaela Altman.

Tomorrow is your last chance to stop by the booth, network with fellow SAP users, and maybe pick up some cool swag not available anywhere else.  In the image above, Greg is sporting the newest volunteer logoware, an ASUG V-neck sweater.  The conference center is not so chilled that I needed to don one, but when December rolls around mine is going to be useful. 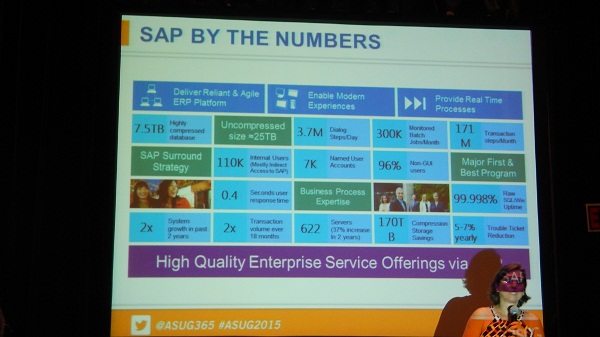 EA1597: How Microsoft Is Transitioning Its SAP Software Landscape to a Hybrid Cloud

Even though my company is not using Microsoft SQL server for our primary SAP ERP systems, we have plenty of SQL Server databases, as well as virtualized Windows systems, so what MS has to say on SAP technical topics is not to be diminished.  I have heard Juergen speak before (not counting Tuesday where a compressed version of this session was presented), and he is a terrific reference.  The first time he said MS runs their beta versions of their database software for their production SAP system before customers do, I was impressed.  His partner Elke today used the phrase “dogfooding” – you’d need to know the reference I guess.

The first slide shows the scale of their SAP presence; I’ll just quote one of those – over 170 million dialog transactions per month. I think we are an order of magnitude smaller (though we do have 3 ERP systems, so not quite).  The performance and uptime numbers are also something to brag about, with a caveat that “some patching not included” in the uptime.  I’ve written in the past about their disaster recovery architecture, so won’t repeat that.

They showed a slide with the percentage of applications or systems that are virtualized (with Hyper-V) – roughly half and half, and discussed why their SAP systems were not in the first flush of applications to be virtualized.  They (let’s call them Basis/DBA) want to be virtualized, for the same reason that they used unreleased database software – they want to find issues and limits before customers do.

The second slide shows their network presence; also a dramatic scale and footprint of data centers and data traffic.  The “dogfood” analogy also applies to cloud infrastructure – MS wants to use their own products and services, not Amazon’s or Google’s, as they are competitors in part of this space.

Though their infrastructure and technology are interesting to me by themselves, the presentation topic was on moving their SAP systems to Azure cloud. Again, I won’t repeat the sizing matrix from yesterday, but will share more I learned today on their approach, limits, and futures.  (see Recently Featured Content in the Virtualization on Windows space for the links to certifications).

To get the kind of performance software like SAP needs, the premium cloud storage model uses all solid-state disk. As the prices go down and reliability goes up, perhaps this premium is not going to be a pain point for a lot of customers in a short time.  It does mean that you need to be careful what you put “in the cloud” since not everything is equal.  If it were me, I’d be stress testing the stuffing out of those cushions.

Just when the topic got to the part I wanted to learn more about – making the central instance more reliable, the microphones went out and I needed to do my duty and get them new batteries.  So I missed any depth to what I learned yesterday – that Microsoft is using a third party tool for that point of failure. Er, to avoid that failure I mean. 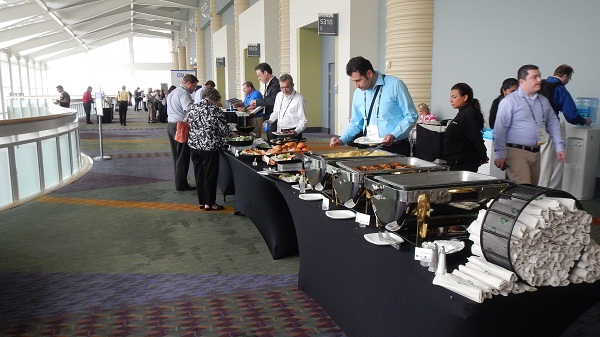 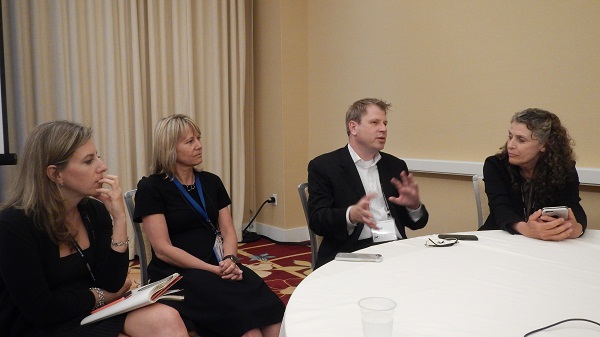 Mentor time.  Marilyn Pratt kicked things off.  Mostly about how SAP needs more developers.  I think I will leave it at that. 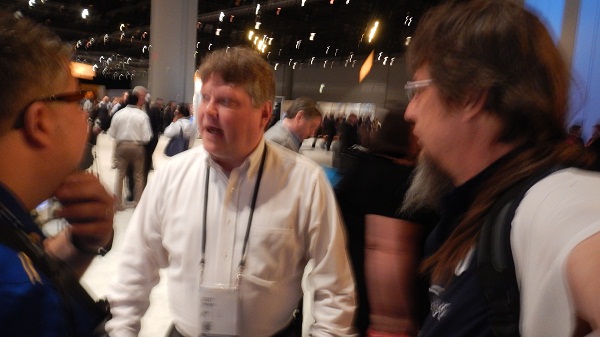 Derek, Scott, me. I was on my way to a scheduled meeting with SAP.  It wasn’t what I was expecting, so I cut it short after 30 minutes.  As I told Dennis Howlett I did not come to the conference to buy anything.  If the answer to any question is the same repetitive party line, I’m in a different reality. 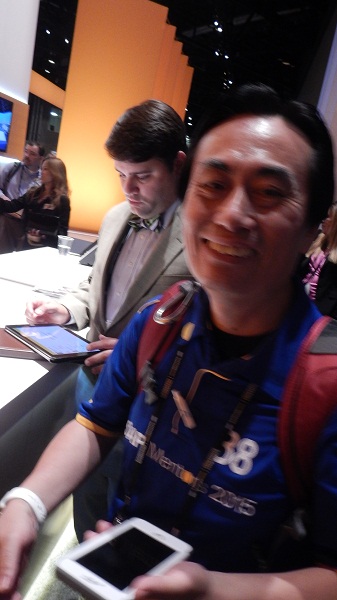 Almost to the meeting center and ran into Simon To  – fellow mentor, ASUG volunteer, and Scouter.   Another cheerful servant leader. 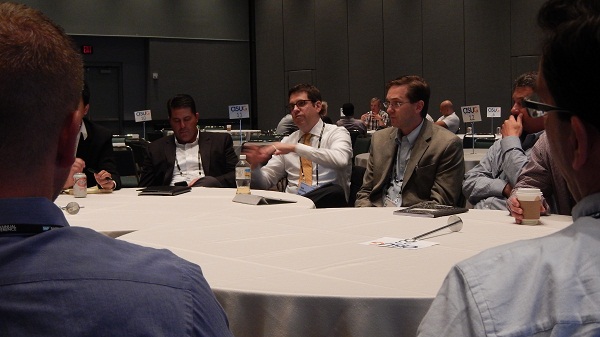 Somnath Manna commented yesterday he wanted to hear what Tod Stenger had to say about the future of APO in the new world.  With a bonus SAP speaker – Eric Simonson.

The set-up of this room was round tables, to facilitate round table discussions. Ideally, those are 6 to 10 people, so everyone can participate.  Often, one or two people do all of the talking, and the rest listen, so not much different from a lecture.  The difference between this session and the closed door sales pitches was obvious.  This is the kind of content I need to take back to the office – what is the road map to go from the systems of today (that were installed a few years ago, with various customizations and configurations) to the system of the far future?

If you know APO, there are a bewildering set of acronyms that are optional components of the planning world.  I was overjoyed to hear them mention non-SAP products in this space, as they recognize they aren’t the only game in town.  And they see that customers need stability in the steps from here to the next platform, so they went over the kinds of performance and feature changes that might be expected.  Even to the point of describing what new and current support packs would accomplish, nor not accomplish.  A refreshing slice of useful information.

Support of current product line goes to 2025, so you aren’t faced with an impossibly short deadline to get ridiculous amounts of work done.

They talked about installing (or reinstalling really) APO on an ECC system.  The logic for this seems to be opposite of the original “take the workload off the transaction system” approach customers were sold on a decade ago, and it is, but the reason is to position the systems for migration to HANA. Those workable details are crucial for execution in the short term.

Some talk about “IBP vs. APO”.  As a non-expert sitting outside the primary circle, I didn’t gain any knowledge I can take back to the office on this topic.  One line of reasoning seemed to be about “partial planning” that does not include order processing.  As we use GATP (Global Available to Promise) and Live Cache, we’ll need to know more.  It sounds like more, ahem, ASUG webcasts are in the offing.  Notes added to the to do list too.

So this is a strange topic, given I’m not particularly interested in HANA as my day-to-day work involves the current systems, hardware and applications, and maybe the one after that, not the one after the one after the one after that. I wrote on the topic nearly a year ago – We can haz PowerHana? and generated good discussion.  Then the topic went dark for a time, until an announcement that the technology was available for customer testing.  I could not be certain what that would mean to my company or others, partly because the release was still uncertain, and partly because even if released it would be an oddity that needed to be explained and rationalized (“but why can’t we just but a bunch of PCs and stack them up together–it would be a lot cheaper”).

I was informed, and have verified, that HANA on Power is on the way to general availability in a short time, with a set of not unexpected caveats.

“The new solutions are expected to enable the latest generation POWER8 systems to run SAP HANA.” – from the IBM press release this week.

Not even going to try to parse the grammar there.  What it means to customers like us is (a) we have choices in architectures we did not have before, and (b) those decisions will not be easy ones.

One more day.  Then I can go back into the woods.