The Kids Are Alright at SAPPHIRE NOW

The shooting pains in his back were the first sign that all was not right with young Adam Smiley Poswolsky. He felt them when he woke up for work, suffered even more when he was at work, and then it became even more pervasive. But when a case of shingles was added to the mix, he put two and two together.

Adam was not happy in his job.

“Suck it up, Smiley!”, said his roommate. “No one likes their job”. Few were crying tears of pity for Adam, who at the time had a well-paying job in the US federal government. On paper, he had the perfect life. But those shingles….

Rather than live with physical pain, Adam opted to follow a path that would lead to emotional fulfilment instead of purely monetary gains. But more than that, he wanted to evangelize on behalf of his generation of fellow Millennials. He quit his job, took some time to figure out which direction he wanted his life to go, and then compiled his insights into a best-selling book entitled The Quarter-Life Breakthrough. 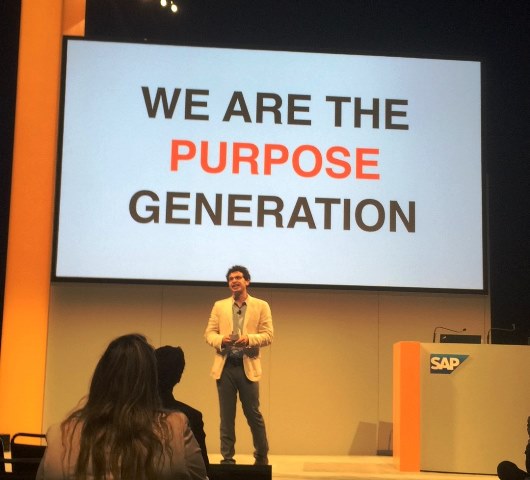 We are not the “me, me, me generation”

In recent years, SAP’s annual SAPPHIRE NOW event in Orlando has hosted Millennial sessions and organized panel discussions for young entrepreneurs.  Once a novelty, the sight of high school and college students on the show floor no longer turns heads. They belong here every bit as much as the SAP customers, partners, and employees seated in the keynote theatre, waiting for SAP’s leaders to reveal the latest innovations. Over one in four people on the planet is under the age of 25, so it goes to follow that several of the students and young entrepreneurs attending SAPPHIRE NOW will become future leaders at SAP.

At this year’s SAPPHIRE NOW, Adam gave a talk called “Create a Purpose-Driven Workplace Through Meaningful Millennial Engagement”. He wanted to let the audience know what it takes to inspire a millennial workforce, and share insights into how millennials are reshaping the future of work, what they are looking for in their careers, and how companies and managers can empower millennial talent.

“Over 50% of millennials will take a pay cut to find work that matches their values, and 90% want to use their skills for good,” said Adam in his session. “Despite unprecedented levels of unemployment and high student debt, this is a generation that wants to work with purpose.”

Some might have cause to worry about where this generation will take us. But after hearing Adam, I think the kids are alright.