VIDEO: Behind the Scenes at #SAPPHIRENOW 2015

It’s tough work making things look simple, but it can be worth it to make others happy. That seemed to be a recurring theme on Monday as I talked to people who were helping to prepare for SAPPHIRE NOW 2015 — SAP’s biggest technology conference of the year — as well as the ASUG Annual Conference.

“We’ve done showcases every year … this year they are a little bigger” Stefan Krueger of SAP User Experience said, standing in the heart of the Experience Zone. “Since we just had our biggest product launch ever with S/4, we thought it’s time to go big on the showcase as well.”

The colossal centerpiece of SAPPHIRE NOW’s show floor is The Octagon, an eight-sided, 360-degree screen that is slaved to interactive touchscreens at in its center. This showcase will offer attendees the chance to answer questions, such as:

Exploring each scenario helps users see the impacts that SAP HANA and S/4HANA can have on organizations. As they continue interacting with the showcase, more and more paths of connectivity will light up the giant octagonal map of the world in front of them.

“It’s not only big, it’s also sophisticated at the backend,” Krueger said. “So we try to make the customer experience as simple as possible here on the frontend.”

Unlike previous showcases, which were noticeably smaller, there will be four people at as many stations around The Octagon’s center console. This showcase features four stories — based on successful implementations — that tell how SAP technology can help organizations:

As big as The Octagon seems when you’re standing inside it, SAPPHIRE NOW’s 2.1 million square feet (200,000 square meters) of exhibition space in the Orange County Convention Center dwarfs the HANA showcase. Transporting people and supplies across a space the size of 16 American football isn’t easy.

So it’s not uncommon to see people clipping along in carts, dollies and forklifts on the day before SAPPHIRE NOW. Nor is it out of the ordinary to see someone riding a bicycle or a Segway.

But everyone is working toward the same goal: to have everything ready when SAPPHIRE NOW opens its doors at 8 a.m. on Tuesday.

The Show Must Go On

“It’s a big team,” Adam Bute said. “We’ve got a lot of people out here working together, which is the greatest part.”

Bute has been in Orlando since April 22 as senior client solutions manager for The Freeman Company, a Dallas-based exhibit designer. He and his team have set up the meeting rooms, installed the carpets, built the exhibitor booths, strung the lighting and more.

“The next morning you come in, everybody’s in a suit and tie, and there’s business being done,” Bute said. “It’s a really cool feeling that you’re a part of it.”

SAPPHIRE NOW’s continued improvement is what impressed Stacey Thorp, executive producer of the SAPPHIRE and ASUG conferences for FreemanXP, a Dallas-based brand experience agency. Freeman and its subsidiaries have worked with SAP for 25 years.

“There’s a partnership between SAP and all of the other vendors who create this event, an army of the thousands that it takes to put it all together,” Thorp said. “When you see it change from paper to reality — to what’s around us — it’s pretty impressive.”

You’ll probably notice the lights, displays and furniture at the booths of SAP’s more than 250 exhibiting partners. But take notice of the plants too — a lot of work goes into them.

“When you look around here, you don’t realize that there’s that much product,” said Cheryl Overend of Laguna Hills, Calif.-based plantscaper Overend Designs. “Their intense color matches the graphics [of the booths].”

This year succulents, pincushion protea and yellow calla lilies are popular — and Overend orders them all by the hundreds, mostly from California. She flies to Orlando every year to provide arrangements for the entire venue, including exhibitor booths, meeting rooms and coffee tables.

Overend and her team start their work in Orlando about a week before the event begins. The flowers are usually fine during the day, but the air conditioning turns off at night. That can stress the plants, so Overend uses only hardy flowers — and she checks on them every morning, replacing things as needed.

“We check in every morning to make sure everybody’s happy,” Overend said. “That’s what like to do: Make everybody happy.”

Simplifying the Finance Landscape at #SAPPHIRENOW

Behind the Scenes at SAPPHIRE NOW 2013 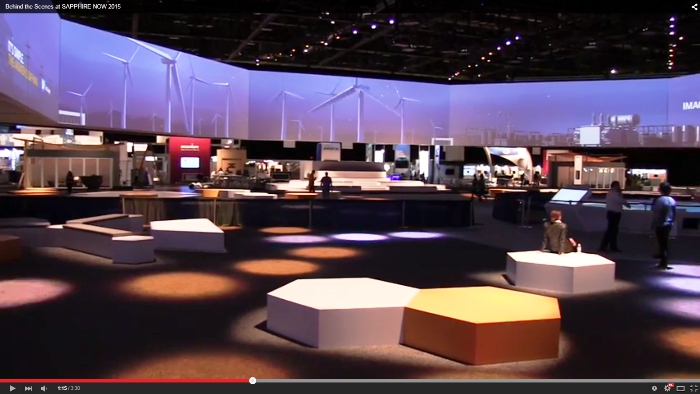 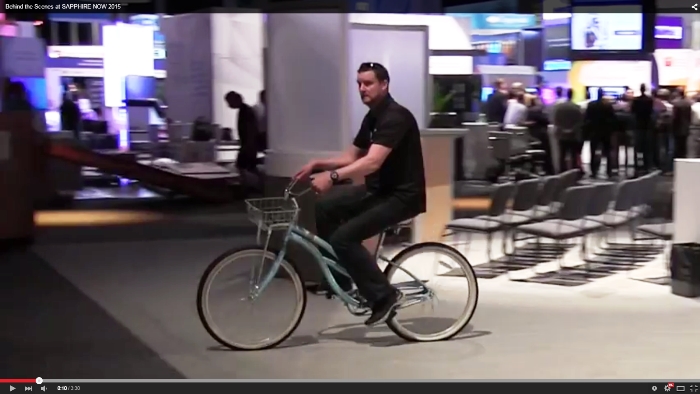 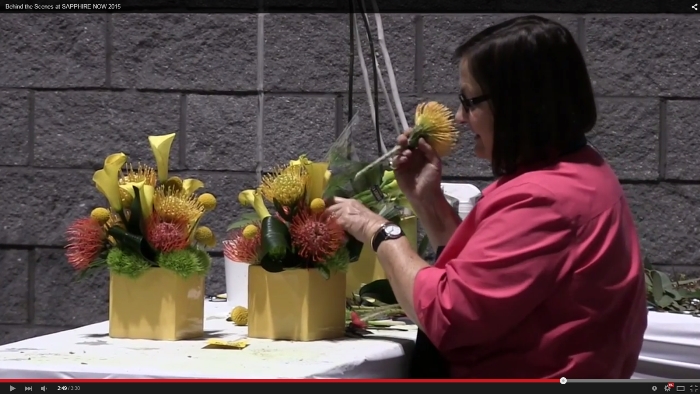