The dark side of IoT

I’m aware that I may disappoint those that – based on the title – were looking for conspiracy theories or a ‘Big Brother‘ story. I also have to ask the Star Wars fans out there to remain patient until December. In fact, the title was inspired by a certain Pink Floyd album…

The dark side of IoT

Most people think of all the emerging consumer devices when confronted with the topic of ‘Internet of things‘ (IoT) and even within the IT business many developers primarily associate microcomputers such as Rasberry PI or Arduino with the term. Others may think of autonomous system like self-driving cars or wearables such as fitness trackers and smart watches. The idea for this blog post was to provide a look behind the curtain (hence, the dark – not directly visible – side) of IoT, so instead of focusing on the billions of devices comprising the internet of things, I’d like to have a closer look on the infrastructure that powers it. 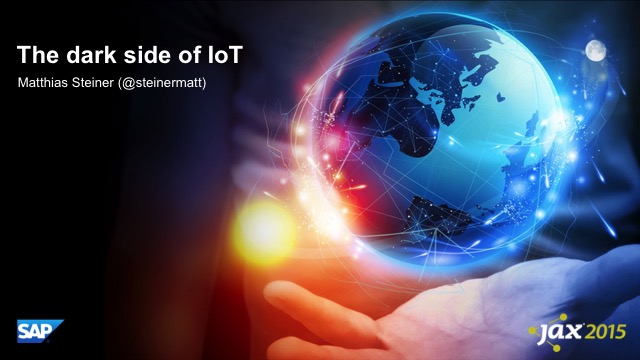 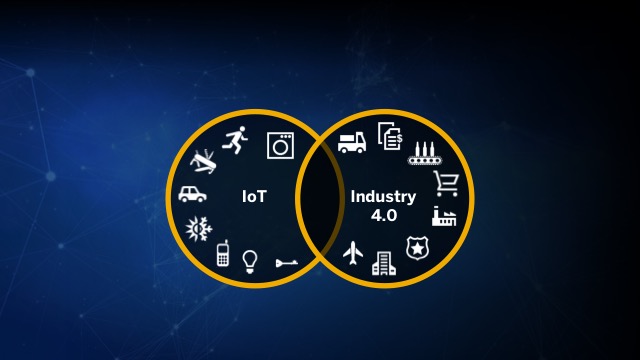 Before we dig deeper, let’s establish a common terminology. The term IoT seems to be trending lately, but in reality it’s not a new phenomena per se. In fact, some of the ideas, concepts and technologies date back to a few years ago. In addition, there’s another term floating around provides an alternative perspective: Industry 4.0. The lines between the two are certainly blurry and overlapping, the former seems to be a bit more broader, while the later is framing the topic in the context of the Industrial Revolution, hence clearly focusing on the business side.

The evolution of the network

In order to fully understand the magnitude of the transformation accompanying IoT it may help to have a look back at the origins of this rapidly growing network. Assuming that most readers have a fair understanding of the History of the Internet, I  only point out that at the beginning it was mostly static content published by a small minority and consumed by a steadily growing number of individuals.

Early in 2002 there was a new movement evolving, which was later-on labelled Web 2.0. On a technical side it laid the foundation for a new breed of web applications that provided similar user experiences as desktop applications such as flicker-free screen refreshes, drag & drop, etc. Yet, it’s the social aspect of Web 2.0 that truly changed the web, which transformed from a pure consumption media to a collaboration platform. That time also marks the advent of social networks such as MySpace, Facebook, Twitter and others (some of which are no longer relevant to the masses). It is estimated that the number of connections between people on personal and business social networks will reach 2.5 Billion by 2020 – that’s one third of the world population!

Yet, this number is dwarfed by the expected number of devices comprising the Internet of Things by 2020. While estimates range from 50-75 Billion devices, it’s clear that the number of devices will soon outnumber us humans by an order of magnitude. How did we get to this point? In short, it’s the convergence of a variety of individual factors such as:

Plus, there’s a growing number of directives, regulations and subsidies that have a positive impact on this trend. For example, the European Union drives the adoption of smart meters to get up to 70% of the homes in Europe equipped by 2020 [Source]. 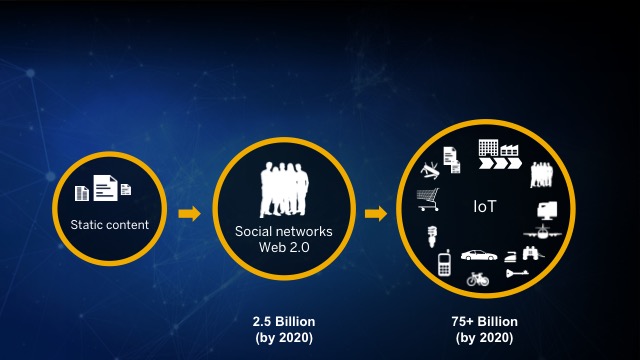 We already see the impact of IoT in various industries today and it’s safe to say that ultimately every aspect of how we do business will be transformed by IoT. Some scenarios like shop floor automation in manufacturing or connected logistics are already well known and established, others are just emerging now. SAP has been pioneering this space long before the ‘Internet of Things’ became a trend and hence there’s already an impressive list of customer success stories including such prominent names as Harley Davidson, Roche and Hamburg Port Authority to name a few examples from varying industries.

Further information: The Internet of Things: Stories from the frontlines 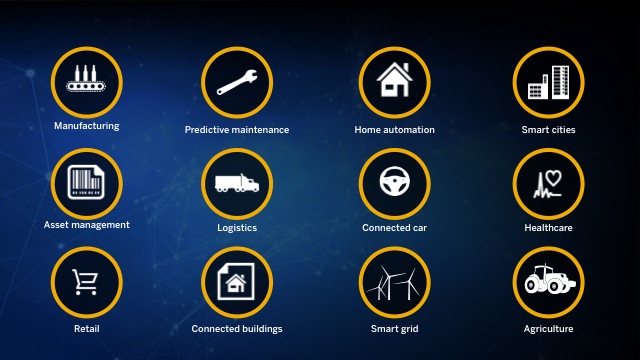 Visionary companies like Harley-Davidson Inc. are at the forefront of Industry 4.0 innovation with its use of end-to-end digital engineering. In Harley-Davidson’s new manufacturing facility, every machine is a connected device, and every variable is continuously measured and analyzed. Equipment provides performance data that the manufacturing system uses to anticipate maintenance issues before machines break, which minimizes workflow interruptions. Harley can tell to the nearest tenth of a second how long it takes to install every component on a motorcycle, and the system alerts floor managers about issues at the individual component level. Harley even measures the temperature, humidity, and the RPMs of the ventilation fans in the buildings. All this data is analyzed continuously to identify factors that will improve efficiency and throughput.

In this new, state-of-the-art facility, Harley-Davidson can build 1,700 bike variations on one production line and ship a customized bike approximately every 90 seconds. Harley-Davidson now manufactures 25% percent more motorcycles with 30% fewer people, and the locked schedule to build a motorcycle has been slashed from 21 days to 6 six hours. [SOURCE]

Those are impressive numbers and while it’s certainly remarkable to note that  Harley has been able to increase the number of manufactured motorcycles and decrease the schedule for a single motorbike from weeks to hours, the truly outstanding aspect is the ability to ship a customized bike within 90 seconds. The ability to provide this degree of customization by automating the manufacturing and assembly process (a concept referred to as ‘manufacturing to a lot of 1‘) is among the prime examples of the true promise of IoT and Industry 4.0.

From here to there

Now that we have explored how this trend impacts existing business models the question at hand is how can companies and their employees prepare themselves for the challenges & opportunities accompanying this emerging global business network in a hyper-connected world? What are the implications for enterprise architecture? 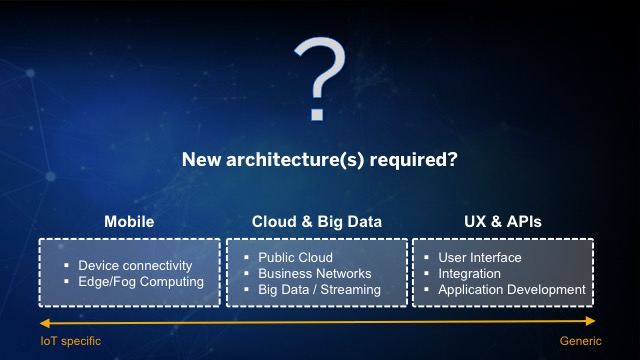 The good news… IoT is not a detached phenomena, but related to the other big topics within IT, namely: mobile, cloud and big data. Sure, some of the requirements like machine integration are specific for IoT scenarios, yet others like high-volume messaging systems and big data analytics are not. Let’s have a closer look at the typical building blocks of an IoT architecture.

From a high-level overview perspective we can break it down into four areas: machine integration, process integration, the IoT platform and its specific capabilities and last, but not least a big data platform. Of course, not every IoT use-case is necessarily a big data scenario, but given that these two most often go hand-in-hand we cover it as an integral part of the overall architecture. 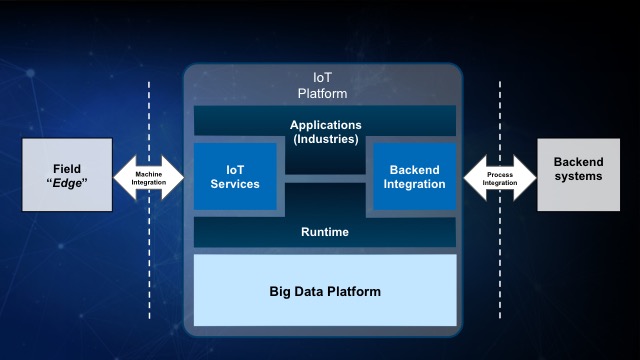 Let’s start our exploration with the machine integration based on three examples: manufacturing/shop floor automation, agriculture and sports. All of these scenarios feature a plethora of machines, devices and sensors that are capturing data we would like to collect and leverage to improve operations and ultimately streamline and optimize the related business processes. The devices in question are located either in the manufacturing plant(s) or even in the field, yet they typically reside next to core of a company’s IT infrastructure. Consequently, these devices are not directly and/or permanently connected to the core network. In addition, many of these devices use specialized communication protocols, which adds complexity to the topic of machine integration.

To facilitate this challenge, many IoT scenarios use so called “gateways” to establish communication and protocol transformation between the “edge” and the “core” network. In consumer scenarios, this gateway is typically a smart phone. In other cases (e.g. agriculture) machines may have built-in communication devices that enable them to directly connect a companies network using well-established standards (e.g. HTTP over SIM). It’s also worth mentioning that in some scenarios the data is not directly transferred to the companies network, but send to a (industry) cloud or social network first, from where the data can be collected/consumed using APIs etc.

On the receiving side (IoT platform) we do see a trend for RESTful architectures that technically adhere to the characteristics of Microservices. In scenarios that require high-volume messaging and/or streaming capabilities we also see components and frameworks known from big data architectures (more on that later-on).

Given all these requirements it is advisable to leverage a specialized IoT platform such as SAP HANA Cloud Platform IoT edition (more details to be revealed at SAPPHIRE NOW in just a few days!) instead of developing a custom solution. Such platforms typically provide a comprehensive set of services and capabilities to address the topics we have outlined so far. For more information on that topic, please consult the respective blog post from my colleague Prakash Darji called IoT and the relevance of Cloud– Part 3. 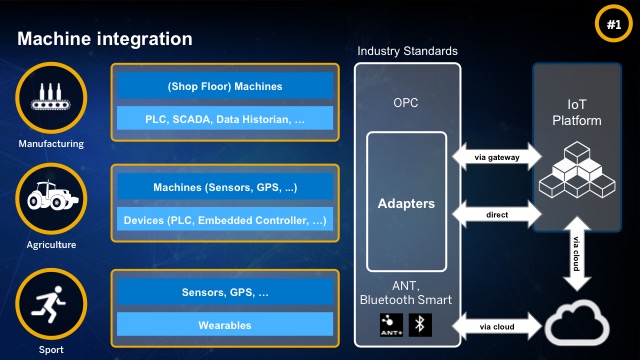 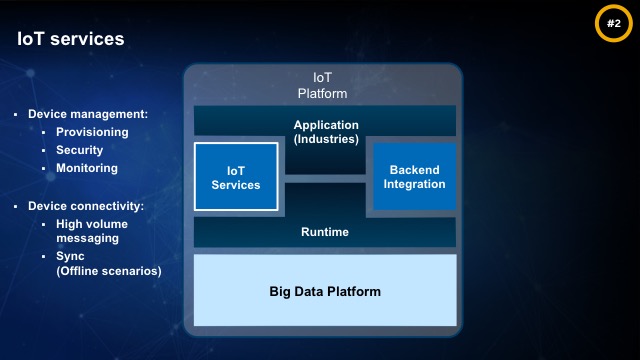 Once the data has been captured it needs to be analyzed, transformed and routed to other (backend) systems. This is an area traditionally handled by classic middleware such as Enterprise Service Buses (ESB) or the like. here, we are dealing with established interfaces and standards such as Web-service, but also RESTful APIs. We also see an uptake of OData – especially in the enterprise space among industry giants like Microsoft, SAP and since recently also Salesforce. SAP addresses these aspects via the SAP HANA Cloud Integration solution of the broader SAP HANA Cloud Platform offering.

In regards to high-volume message processing and other big data requirements IoT scenarios do not impose different requirements on IT architecture than other domains. Consequently we can resort to the same architecture guidelines that have been established in (and proven) the context of big data by now: lampda architecture. Here, the major technical components are mostly open-source and some has became de-facto standards like Hadoop. SAP has been embracing these technologies early on and they are an integral part of its big data strategy as confirmed again recently by Irfan Khan at the European Hadoop Summit (SAP Embraces Hadoop In The Enterprise.) We’ll definitely hear mote about SAP’s plans in this context at SAPPHIRE NOW and I’ll update the blog post respectively! 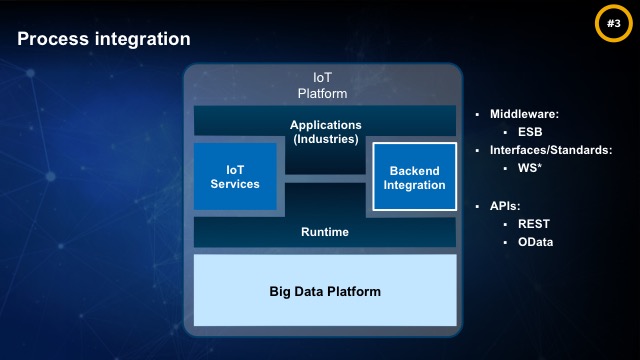 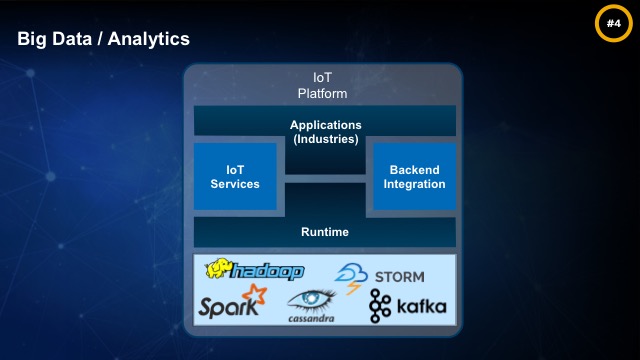 As we see IoT is about to transform how we do business accompanied by opportunities and challenges in equal measures. From a business perspective IoT promises to provide “the ability to combine machine-generated data with traditionally human-generated data to amplify insight, understanding, real-time decision making up to truly automated businesses” [SOURCE].  Technically, we see a mix of IoT-specific requirements like machine integration and other – more generic – topics within enterprise IT, both of which can be addressed by respective cloud platforms such as SAP HANA Cloud Platform.

Consequently every business is well-advised to assess how-to leverage IoT to streamline and optimize their processes. Some early movers are already staking their claims and about to establish industry-specific cloud platforms to facilitate co-operation between the individual actors within a given domain – see Siemens to build open cloud platform for industrial customers. Herein lays the true potential of IoT: once we transition from isolated solutions towards connected networks we are rapidly entering a realm that sounded like science fiction a few years ago – it’ll be like witnessing Metcalfe’s law in action.

Or as William Gibson once put it: 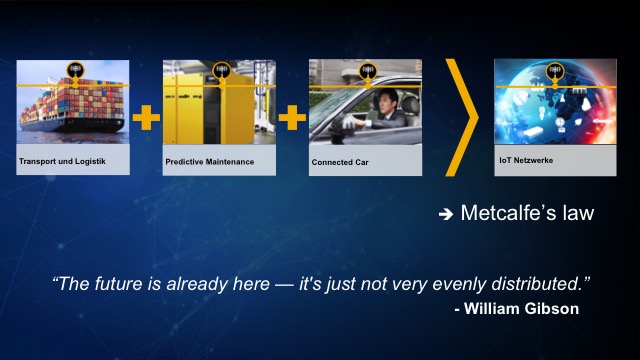 I’d like to express my sincere thanks to a number of colleagues who supported me in the creation of this presentation and/or provided the foundation with their respective work: Eric Westenberger, Michael Lynch and Uwe Kubach.

The dark side of IoT from Matthias Steiner