Following on from the Hadoop core installation on a Raspberry Pi 2 Model B in Part 1 of this blog series, in this Part 2, we will proceed with installing Apache Hive on top of HDFS and show its basic principles with the help of last part’s word count Hadoop processing example.

Hive represents a distributed relational data warehouse featuring a SQL-like query language, HiveQL, inspired by the MySQL SQL dialect. A high-level comparison of the HiveQl and SQL is provided in [1]. For a HiveQL command reference, see: https://cwiki.apache.org/confluence/display/Hive/LanguageManual.

The Hive data sits in HDFS with HiveQL queries getting translated into MapReduce jobs by the Hadoop run-time environment. Whilst traditional relational data warehouses enforce a pre-defined meta data schema when writing data to the warehouse, Hive performs schema on read, i.e., the data is checked when a query is launched against it. Hive alongside the NoSQL data warehouse HBase represent frequently used components of the Hadoop data processing layer for external applications to push query workloads towards data in Hadoop. This is exactly what we are going to do in Part 3 of this series when connecting to the Hive environment via the SAP Lumira Apache Hive standard connector and pushing queries through this connection against the word count output file.

First, let us get Hive up and running on top of HDFS.

Add the paths to the Hive installation and the binary directory, respectively, to your user environment.

Make sure your Hadoop user chosen in Part 1 (here: hduser) has ownership rights to your Hive directory.

To be able to generate tables within Hive, run the Hadoop start scripts start-dfs.sh and start-yarn.sh (see also Part 1). You may also want to create the following directories and access settings.

Strictly speaking, these directory and access settings assume that you are intending to have more than one Hive user sharing the Hadoop cluster and are not required for our current single Hive user scenario.

By typing in hive, you should now be able to launch the Hive command line interface. By default, Hive issues information to standard error in both interactive and noninteractive mode. We will see this effect in action in Part 3 when connecting to Hive via SAP Lumira. The -S parameter of the hive statement will suppress any feedback statements.

Typing in hive –service help will provide you with a list of all available services [1]:

If you are curious about the Hive web interface, launch hive –service hwi, enter http://localhost:9999/hwi in your browser and you will be shown something along the lines of the screenshot below. 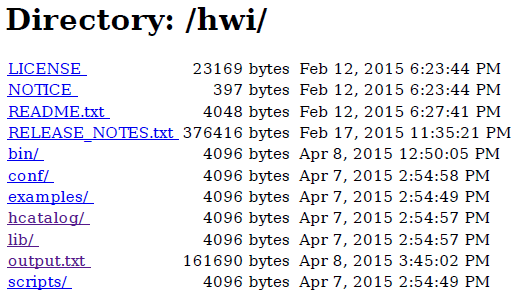 If you run into any issues, check out the Hive error log at /tmp/$USER/hive.log. Similarly, the Hadoop error logs presented in Part 1 can prove useful for Hive debugging purposes.

Following on from our word count example in Part 1 of this blog series, let us upload the word count output file into Hive’s local managed data store. You need to generate the Hive target table first. Launch the Hive command line interface and proceed as follows.

In other words, we just created a two-column table consisting of a string and an integer field delimited by tabs and featuring newlines for each new row. Note that HiveQL expects a command line to be finished with a semicolon.

The word count output file can now be loaded into this target table.

If everything went according to plan, your screen should show a result similar to the screenshot extract below. 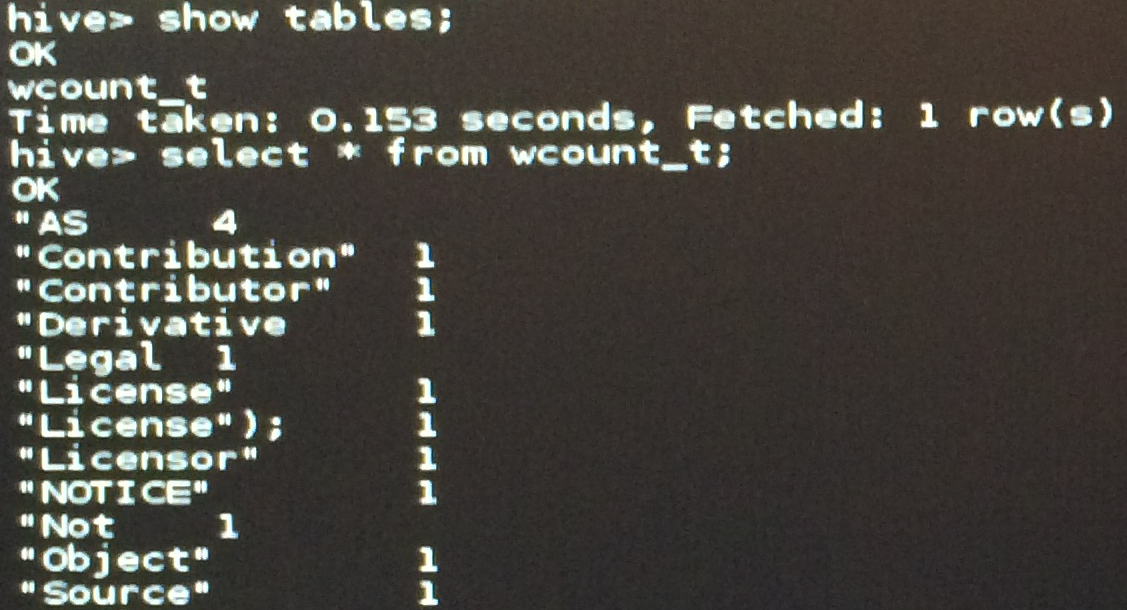 If so, it means you managed to both install Hive on top of Hadoop on Raspberry Pi 2 Model B and load the word count output file generated in Part 1 into the Hive data warehouse environment. In the process, you should have developed a basic understanding of the Hive processing environment, its SQL-like query language and its interoperability with the underlying Hadoop environment.

In the next part of this series, we will bring the implementation and configuration effort of Parts 1 & 2 to fruition by running SAP Lumira as a client against the Hive server and will submit queries against the word count result file in Hive using standard SQL with the Raspberry Pi doing all the MapReduce work. Lumira’s Hive connector will translate these standard SQL queries into HiveQL so that things appear pretty standard from the outside. Having worked your way through the first two parts of this blog series, however, you will be very much aware of what is actually going on behind the scene.

I'm just adding my learning, in case if someone else is facing the same issues:

NOTE: i'm performing this on a VM on my laptop running Debian 8.5.0 (jessie)

had to add it to bashrc file

had to create directories level by level

3. Cannot start the hive cli using the command hive or

Get the following error:

Caused by: org.apache.hadoop.hive.ql.metadata.HiveException: MetaException(message:Hive metastore database is not initialized. Please use schematool (e.g. ./schematool -initSchema -dbType ...) to create the schema. If needed, don't forget to include the option to auto-create the underlying database in your JDBC connection string (e.g. ?createDatabaseIfNotExist=true for mysql))

This happens when the hive command is executed before the metastore_db is initiatlized. This causes a partial/corrupted metastore_db to be created in the following path:

To rectify this, we have to rename the metastore_db file to metastore_db.bak and then execute

This will create a new metastore_db.Hive CLI should be open now.

One more thing I noticed is that, if I tried to open the hive CLI from a different directory, it created the metastore_db again in that directory and threw the same error as above. So looks like we have to start the hive CLI service from the path: