This year Victoria University extended its SAP related offerings by introducing the Master of Business Analytics program.  This has been exciting but also daunting. Daunting because the program uses a range of SAP’s Business Intelligence solutions to support theoretical concepts and that has meant the need for up-skilling of staff and the development of many new workshops.  This blog outlines the insight I have gained whilst developing a data visualisation workshop based on SAP Lumira to analyse crime data.

Previously Sanjiv Basal from SAP Australia developed a Youtube video on how SAP Lumira could be used to analyse crime data from the state of NSW in Australia.  I contacted Sanjiv in regards to sourcing the data set to develop a workshop for the students.  The data set is available from http://www.bocsar.nsw.gov.au/Pages/bocsar_crime_stats/bocsar_detailedspreadsheets.aspx .

The data set contained information concerning the criminal offence that occurred, its location and date it occurred. There were 101,808 criminal offences in 2012/2013 in NSW. The crimes were classified as per 21 different categories with many of them further defined by subcategories.

Data visualisation can be used for both explanation and exploration and I wanted the students to experience both of these aspects.  The explanation perspective would be achieved by directed activities to create different visualisations to highlight different aspects of the data.  After these visualisation techniques have been explained, students were provided with questions where they had to apply these techniques to explore (exploration perspective) the data and identify trends. The workshop was structured using a data visualisation workflow; Prepare the data, Visualise the data, Compose the data into a story, and then Share the story.  Also I wanted to empathise Shneiderman’s Mantra; Overview First, Zoom and Filter, then Details On Demand.

A spreadsheet with the crime data was loaded into SAP Lumira.  The crime data was recorded monthly so to allow aggregation a Time Hierarchy was created that included; year, quarter, month.  To give the students an understanding of the extent of criminal offences in NSW bar charts were created identifying Crimes by Quarter. 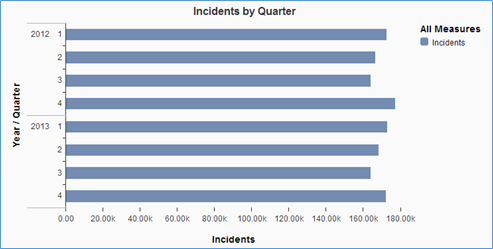 The visualisation identifies that quarters 1 and 4 in each year had the highest crime incidents. The students then filtered by the quarters with highest crime incidents and then displayed the data by month. January 2013 had the highest incidents of crime in NSW over the 2 year time period.  The students then created a visualisation to highlight the types of crimes which occurred in this month. 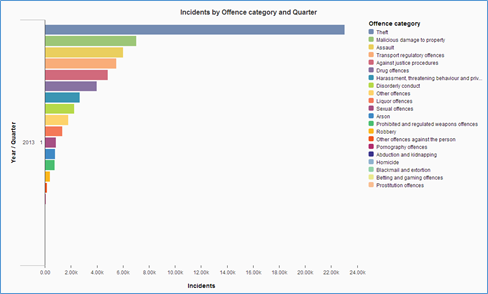 Theft was most common crime in January 2013.  However, there are many types of theft so students filtered on this crime category and added the subcategory dimension to the visualisation.  This highlighted that Fraud was more prevalent than Theft From A Motor Vehicle. 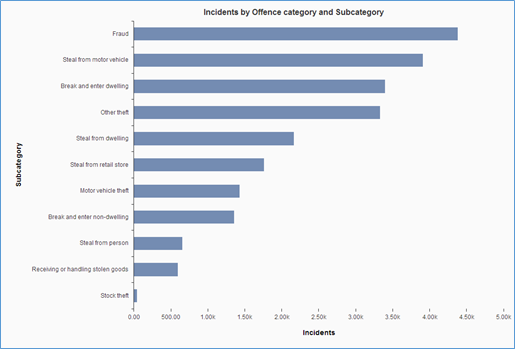 To investigate the incident of certain crimes across the State, students created a visualisation for Liquor related offences for each month. 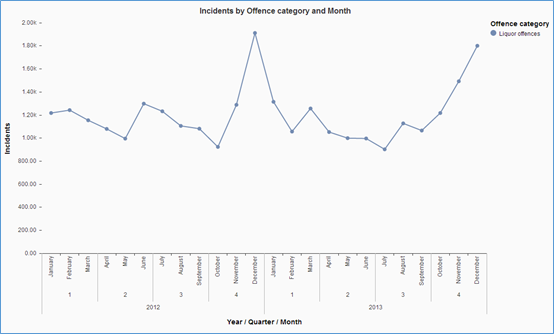 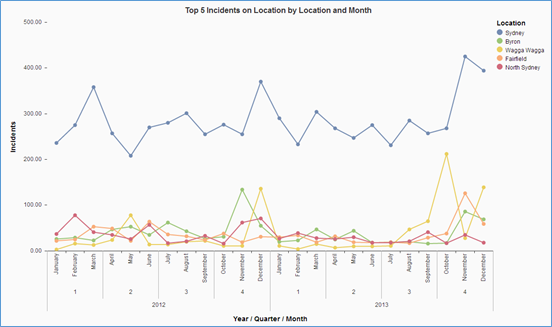 The visualisation reflected the overall state trend except for Byron where Liquor Related Offences occurred in November each Year.  Students were required to explain this anomaly using contextual information which could be found on the internet.  It appears that the answer is Schoolies!  Schoolies is an Australian tradition where final year high school students celebrate the end of the school year by congregating at particular locations throughout the region (Gold Coast, Bali, Byron Bay etc.).  Byron Bay has a population of 9,000 which increases to approximately 19,000 with the influx of student revellers.

Students then created a visualisation to identify the Top 5 criminal offences for Byron to identify if there are spikes in others crimes during Schoolies. 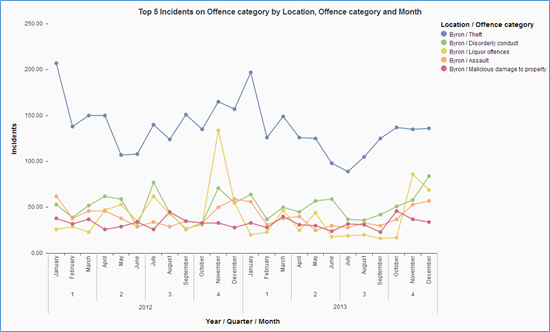 It appears that there is an increase in crimes associated with Liquor, Disorderly Conduct, and Assault during Schoolies.

Students then used the visualisations they had created to form the basis of a story for others about criminal offences in Byron.  They utilised the Compose feature of SAP Lumira to create a Story Board.  As part of this Story Board they created a visualisation with interactive controls to allow an end user to explore the data. 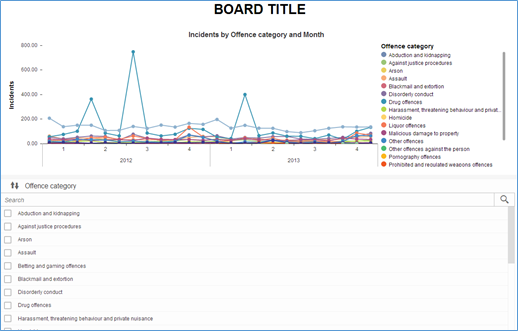 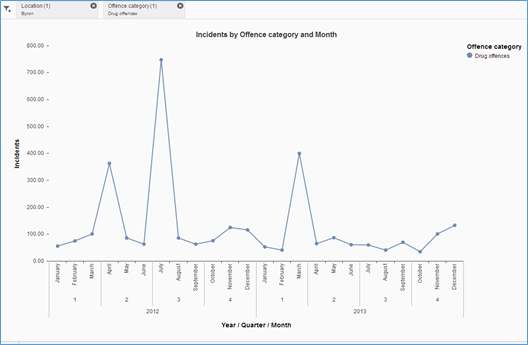 A quick search on the internet revealed that Byron hosts a number of musical festivals throughout the year (Easter and July).  The Byron Bay BluesFest conducted in Easter each year (Easter occurred in April 2012 and March 2013) attracts an attendance in excess of 100,000 people. The Splendour In The Grass music festival attracts approximately 27,500 attendees and isconducted in July.  There was a very high, excuse the pun, incident of Drug related crime in July 2012 but there was a significant reduction in drug offences in 2013.  Contextual information from the internet indicated that organisers in 2013 warned attendees, via Twitter:

This may have contributed to the reduction in offences. Was there a difference in the drugs being used? The visualisation was modified to include the Drug Offences Subcategory. 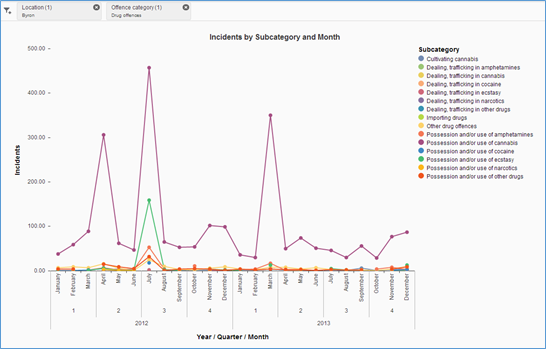 The visualisation indicates that most prevalent Drug Offence was Possession and/or use of cannabis. There appears to be a slight increase in drug offences (cannabis) during Schoolies (November).  However when you consider the scale of cannabis offences during the rest of the year and the number of attendees (10,000) the increase is relatively small (~50).

Based on these findings I included the following “Test Your Skills” task for students.

The Byron Bay area has two major music festivals each year (Easter and July). Create a visualisation which indicates associated criminal activities with these festivals. Are there significant increases in criminal offences? Try adding some graphics to enhance your story.

When creating the workshop I was hoping to create a worthwhile learning experience for my students. What I didn’t expect was to gain an insight into the crime trends in Byron especially when a number of my colleagues attend these music festivals.  The workshop notes and associated data set can be found at http://global.sap.com/asia/campaigns/2015-curriculum/data-visualisation-sap-lumira.zip  or  http://www.business.vu.edu.au/sap/learninghub.asp .

Fantastic, Paul - I wonder if you have considered using this data to "predict" where crime where occur using SAP Predictive Analytics?  SAP's Charles Gadalla gave a great demo of this at SAP Insider BI2015

Very nice Paul!  Thanks for sharing.

Thank you for sharing your experience! I think will be valuable for other universities in the world trying to create similar courses

This is fantastic. I think back 10 years ago to studying SAP at university and configuring dunning in Accounts Receivable felt like cutting edge!

Looking forward to seeing what else Vic Uni students do 🙂

P.S anyway the students can get their hands on weather data and predict a sunny day in Melbourne?