Last week Friday we finally released Service Pack 4 of SAP Gateway for Microsoft. After our Service Pack 3 release back in September where we focused on the integration in Microsoft Azure & Office 365, this time we looked at another important piece: SAP Mobile Platform.

Together with SMP 3.0 SP07 which was just released a week ago we now have a beautiful integration that allows customers who are already using SMP to quickly bring the same data to Office applications as well.

As we have seen with the integration in Azure & Office 365 Office is by far no longer only the desktop. With the Apps for Office Model we can see cross platform application developments (see this Outlook Workflow integration) which only make sense to use SMP as well.

With Service Pack 04 you can now choose if you want to create your application directly connecting to an SAP Gateway system, or if you want to have an SMP with all it’s features and functions in between. You not only benefit from additional data-sources (like JDBC, SOAP, …) but can also leverage all the additional reporting and monitoring features that are already available with SMP. 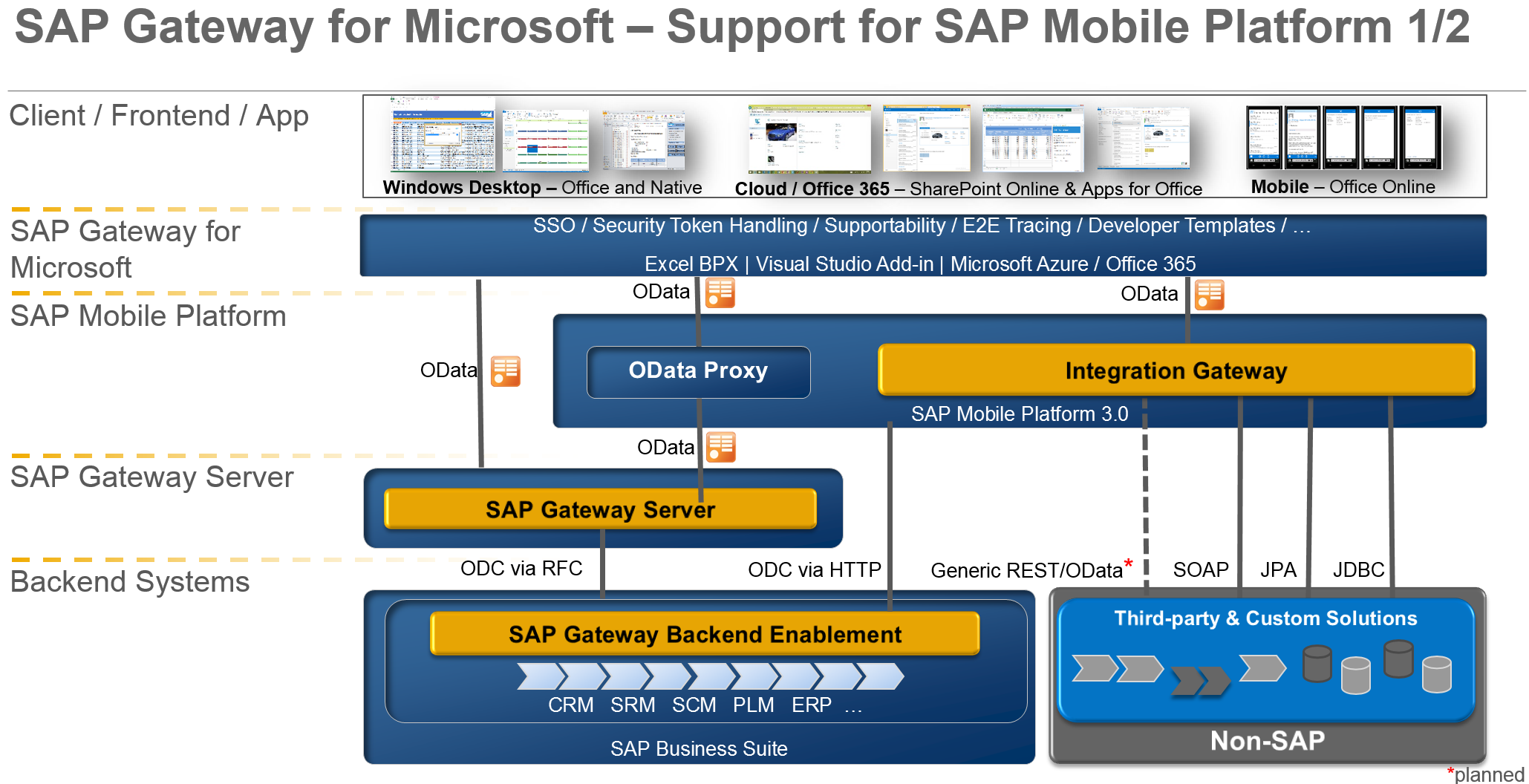 Another important aspect that we wanted to enhance is the integration in Azure. With SP03 we made sure that we have the basic plumbing in place. Now we looked at the deployment story, the developer story and provide you with a similar developer experience that you are already used to in the context of SAP Gateway.

A PowerShell script now simplifies the installation a lot. Instead of having to manually prepare your Microsoft Azure instance, configure here and there and finally deploy the SAP Gateway for Microsoft role, you can simply run the PowerShell script which guides you through all the required steps.

For the developer story, you can now directly from Visual Studio simply connect to your SAP Gateway for Microsoft component running on Azure, browse through the available provider systems and generate the code for the available OData services. 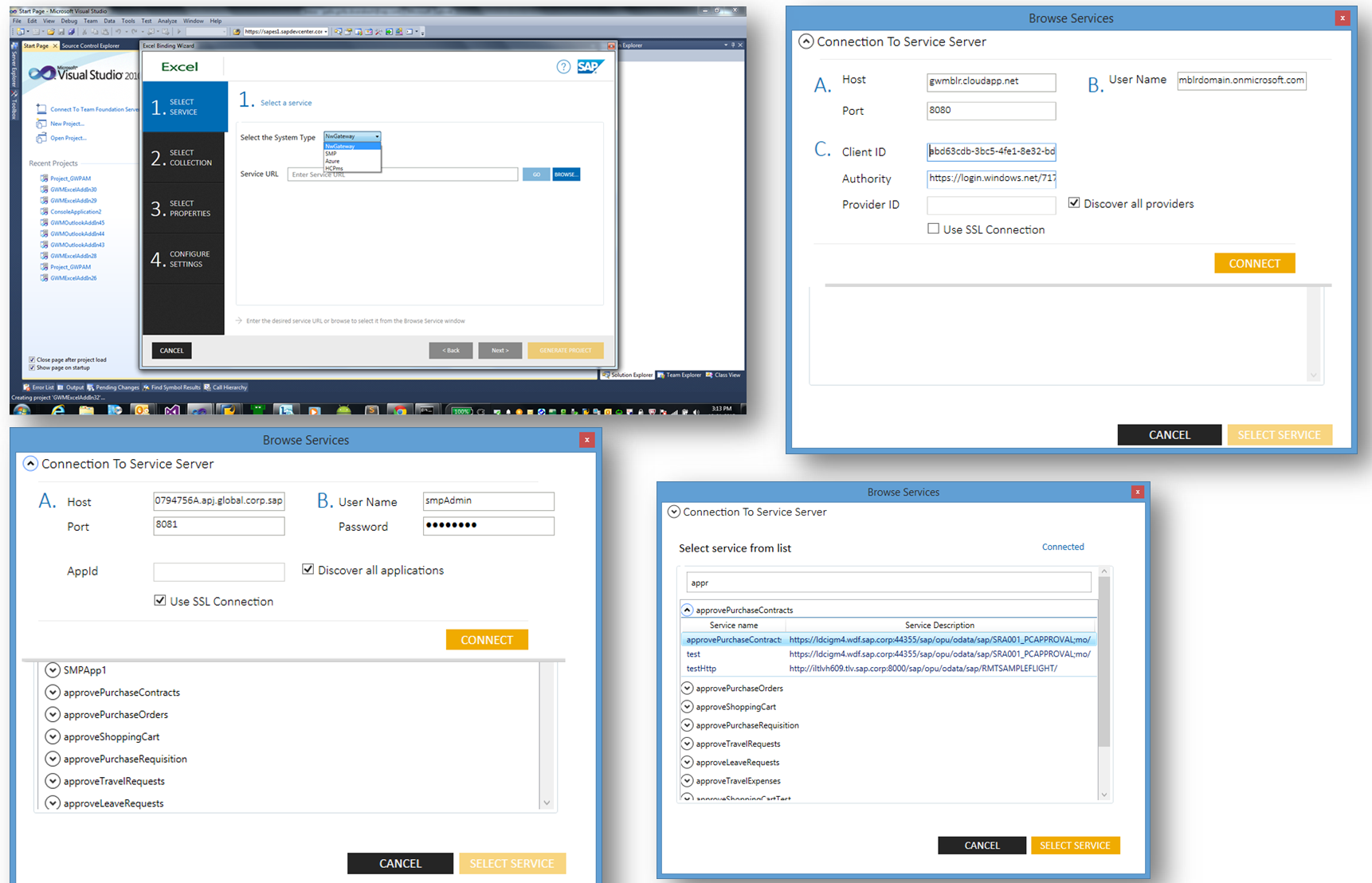 Finally we also got feedback for the SAP Gateway for Microsoft Excel Add-in and introduced a few new features like enhanced filtering support or better visibility of fetched records.

You should be able to download the full official release from the Service Marketplace as of today. The documentation on help.sap.com will also be updated soon and of course our trial version (containing only the SAP Gateway for Microsoft Visual Studio Add-in) is also updated with SP04.

Any hint where to download the GWM_AZURE installation ps script?

good pointl... it seems to be missing. Give me some time and I will work with the colleagues to make it available.

The Zip file is empty from the SAP store. Can you please help

I don't think the ZIP file is empty, but I think there is an issue in the way we zipped the file. When I try to open it using the built-in Windows unzipper it does not work, however, with tools like WinRAR it does... Can you try with this? At the same time I will reach out to our colleagues at the SAP Store and see if we can fix this. 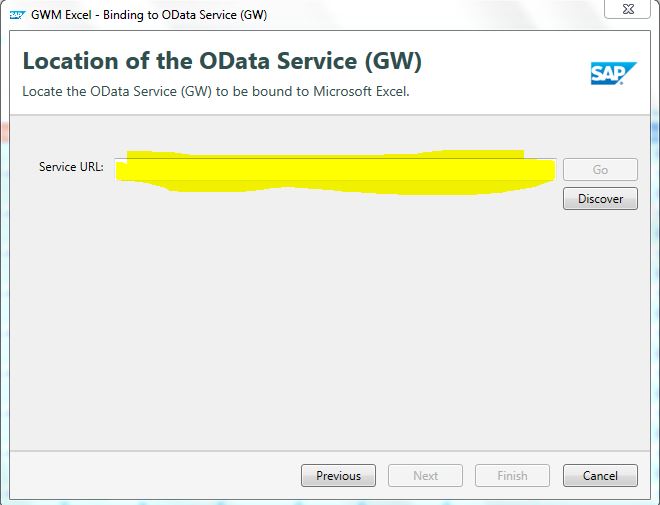 Binding to OData service is lost when document is saved with multiple worksheets. Other worksheets are for calculation only.

- Changing a formula on a different tab,or just save the document

- Saving the file (even on desktop)

The product SAP Gateway for Microsoft has been removed from the price list and can thus not be purchased anymore.