With Lumira 1.25 release, you can perform drilling operations against hierarchical data within Lumira story boards. These drilling operation can be done at both edit and view times. Using Lumira Desktop, open “Sales Team Management” sample document that comes with the product, navigate to the first page in Compose room, and click on one of the data points as shown in the image below. 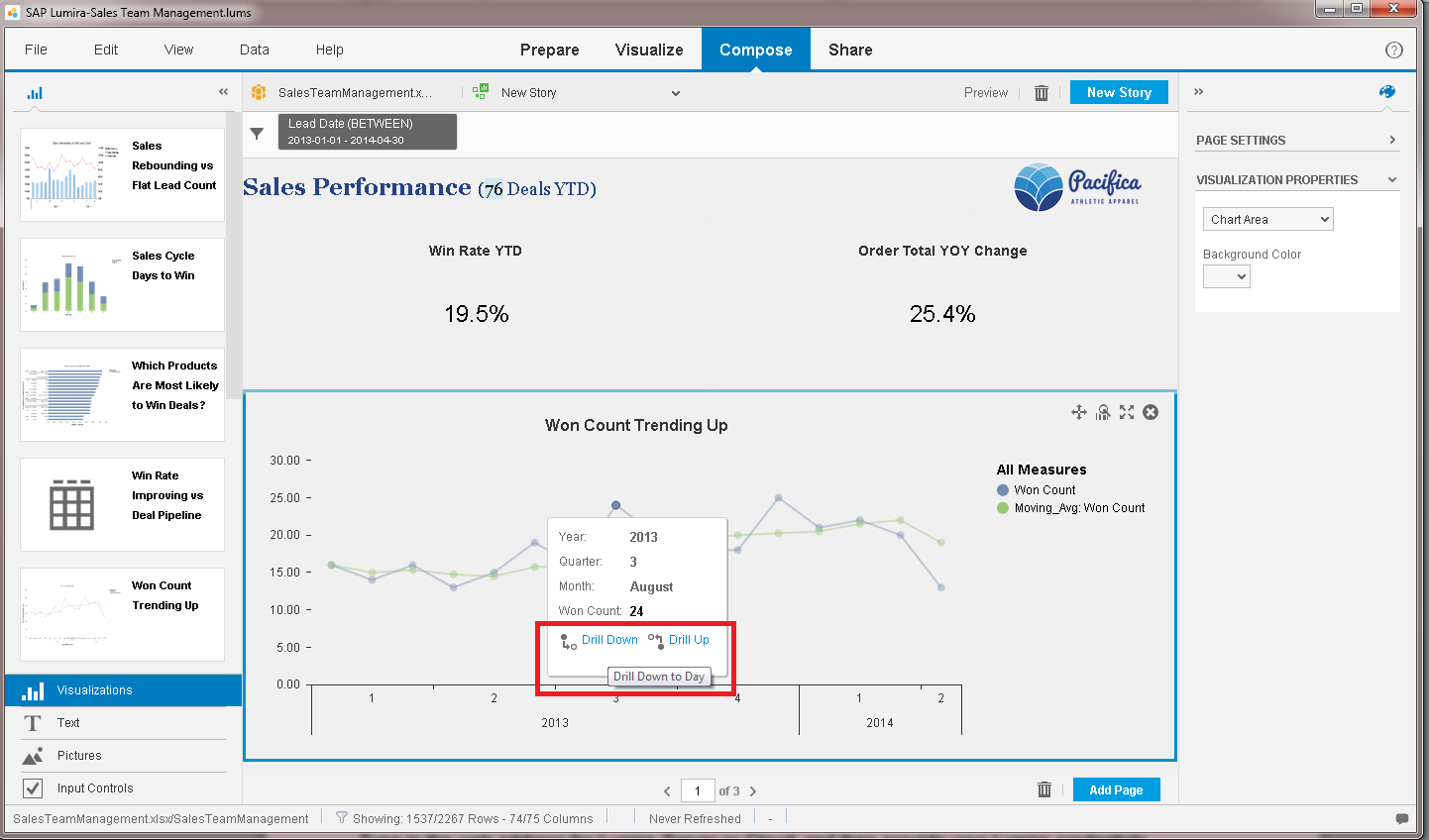 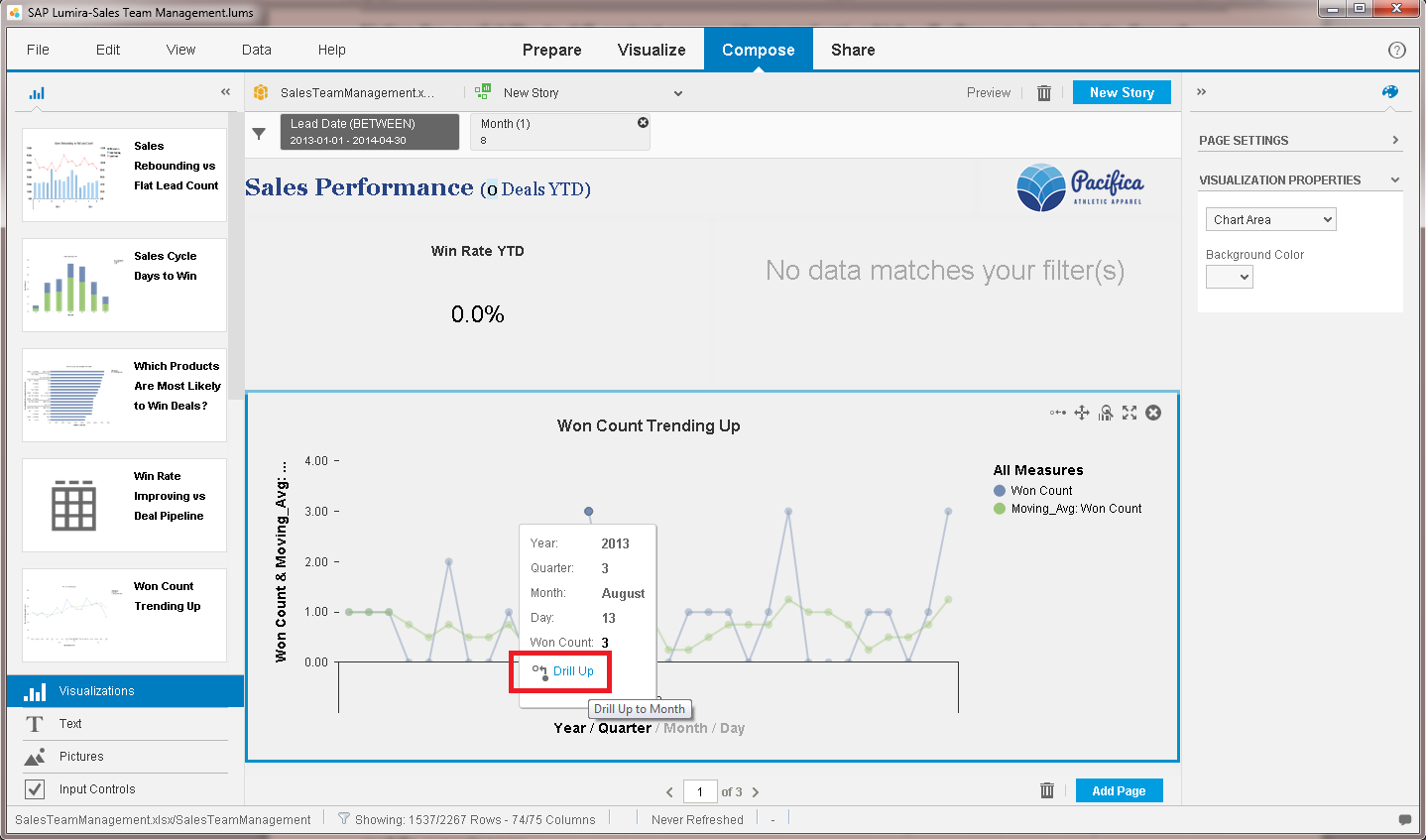 After performing a drill operation, a drill back action icon will be shown in the top right corner of the visualization frame, which acts as a back button in a web browser, and allows you to revert the last drill operation (either up or down) and restore the visualization state prior to the last drilling operation. The drill back icon will save the drill state (history) only while performing drilling operations in the same room (Compose or Visualize), that is, it will be reset when switching rooms or opening a saved document. In case there was no drill operation performed, the drill back icon is not shown. 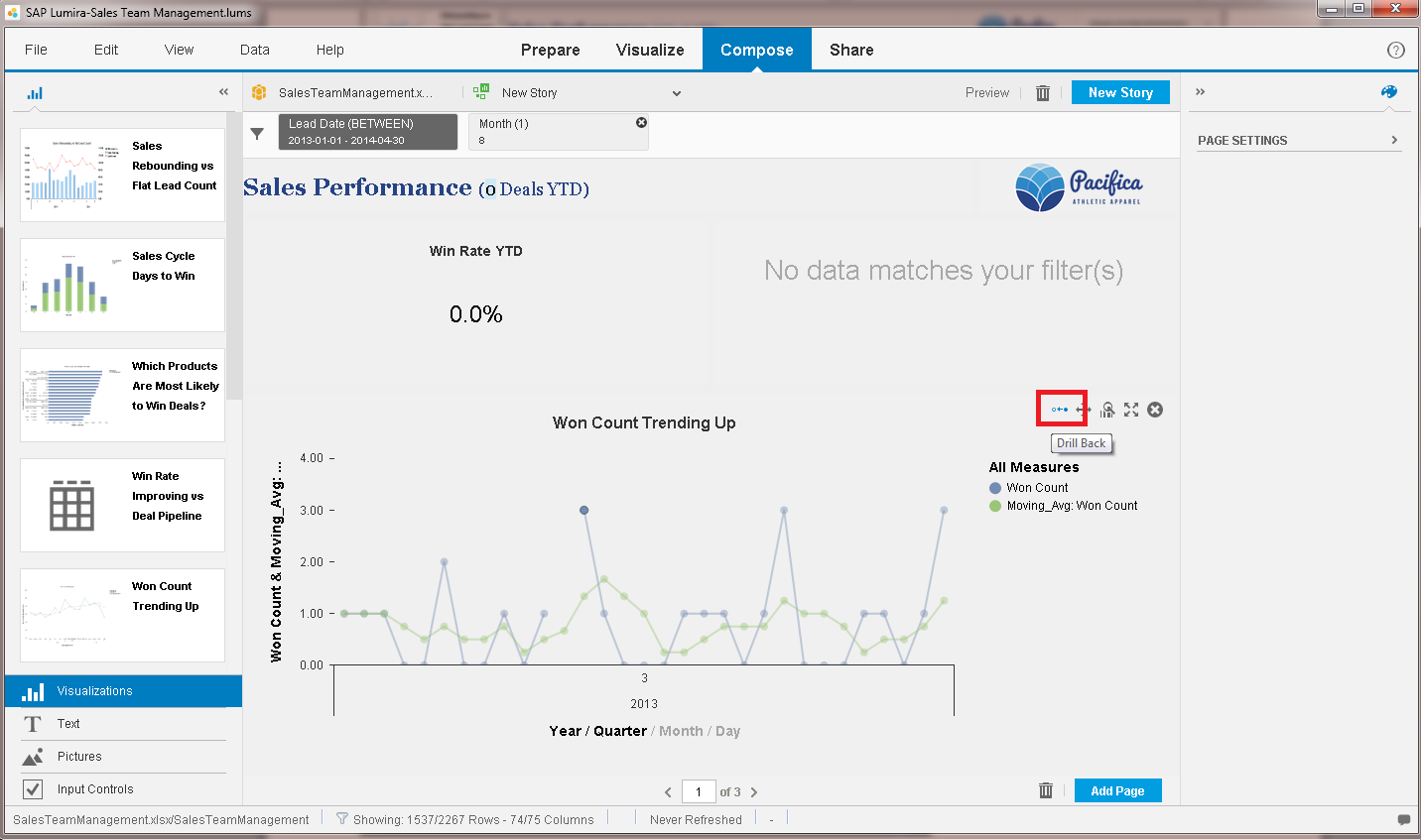 In case you had multiple hierarchical dimensions stacked on the same axis, the drill context menus will provide another drop down option to choose which hierarchy to perform drilling on. For example, if you go to Visualize room, select the first visualization, add Product hierarchy to X axis (in addition to existing Lead Date hierarchy already on X axis), and click the drill down context menu on one of the data points, you would be able to choose which hierarchy to drill down as shown in the image below. 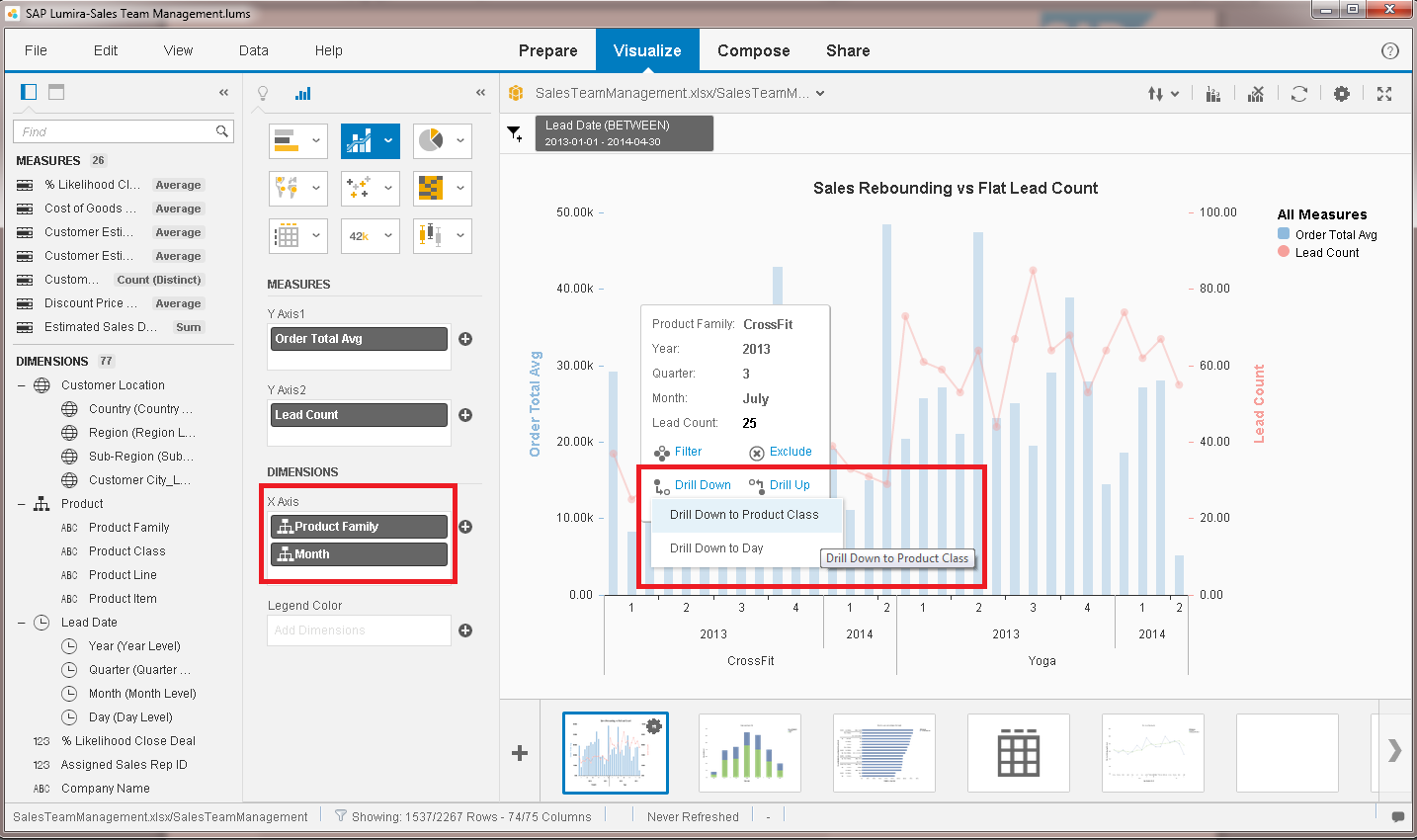 Notice that the drill up menu item is located in the same context menu as the drill down one, and not in the filter bar as in prior releases. As mentioned at the beginning of the post, drilling operations can be done at both edit and view times as illustrated in the next image. 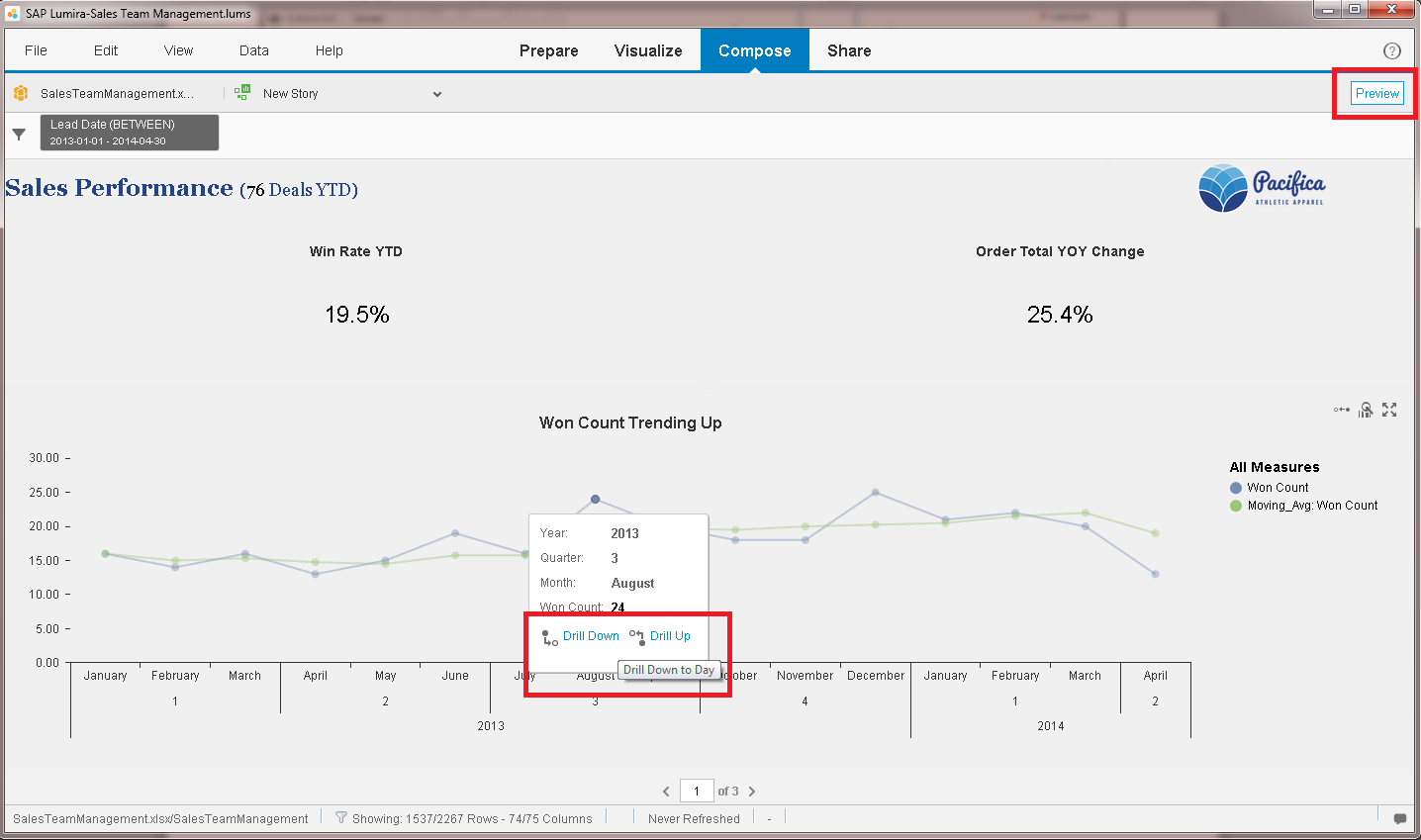 In addition to Lumira Desktop, users of Lumira Cloud and Server can also perform these drilling operations with basic BI consumer access rights.