As part of the Autism Awareness Month, friends of the SAP Autism at Work Program are writing about events, news and perspectives related to Autism in the Workplace and the contributions that individuals in the spectrum and organizations who support them make everyday.  This blog shares my perspective of the United Nations World Autism Awareness Day. Please visit Dr. Tanja Rueckert’s  blog to read her perspective on the event.

Article 27 of the United Nations Convention on the Rights of People with Disabilities recognize the right of persons with disabilities to work, on an equal basis with others; this includes the right to the opportunity to gain a living by work freely chosen or accepted in a labor market and work environment that is open, inclusive and accessible to persons with disabilities.  The United Nations General Assembly unanimously declared April 2 as World Autism Awareness Day (A/RES/62/139).

This year’s theme for the United Nations Autism Awareness day was “The Autism Advantage”, which addressed autism in the workplace.  This theme is close to our hearts at SAP as we have the objective of having 1% of our workforce represented by people in the Autism Spectrum (about 650 jobs).

On April 2nd, we had the privilege of joining UN Secretary General Ban Ki-moon in a call to action to employers worldwide to open their doors to candidates affected with autism spectrum disorders. Autism is the disability with the highest level of unemployment at about 85%. The event was joined by more than 2,100 people (500 on-site) with a shared vision and from all walks of life, from individuals in the autism spectrum to parents to public sector officials to private sector executives of companies like Microsoft, Avago, HP, IBM, Google, CAI, Freddie Mac, Goldman Sachs.

Secretary General Ban Ki-moon opened the session with a call to action followed by Delaware Governor Jack Markel who delivered a memorable keynote. Governor Markell shared the inspiring story of Thorkil Sonne, founder of Specialisterne, a non-profit organization that has as objective the enablement of 1 Million jobs for people with autism and similar challenges worldwide.

We heard inspiring stories that traversed the spectrum of hopelessness to greatness. Emily Brooks, one of the panelists shared her difficult experience as a person with autism in the workplace, reminding us that there is much more to do. We found her fortitude and determination inspiring. Thomas D’Eri, COO of Rising Tide Car Wash told us about hiring 35 employees with autism because of their attention to detail and work ethic, how the quality of his service has grown thanks to these individuals,  through his example we learned that no business is to small to be a giant.

We also heard from Ernie Dianastasis, Managing Director of CAI, an SAP Partner located in Delaware who is committing to have 3% of CAI’s workforce represented by people with autism by 2015.

Dr. Tanja Rueckert, SAP COO/EVP of our Products and Innovation Group, reiterated our commitment to hire people in the autism spectrum and shared the inspiring stories of two SAP employees in her area who are shining after only 11 months on the job and after being underemployed for 13 and 3 years respectively. She also shared that through our autism program we have learned in powerful new ways that innovation and growth flourish not in spite of our differences but because of them.  Patrick Viesti, one of our first employees in the autism spectrum in North America, shared his journey prior and after joining SAP. His testimony was very well received by SAP employees and externals.

Also attending the event were  Anka Wittenberg, SAP Chief Diversity & Inclusion Officer, Executive Sponsor of the SAP Autism at Work Program and  V.R. Ferose, SVP of Globalization Services and pioneer of the Autism at Work concept in India. 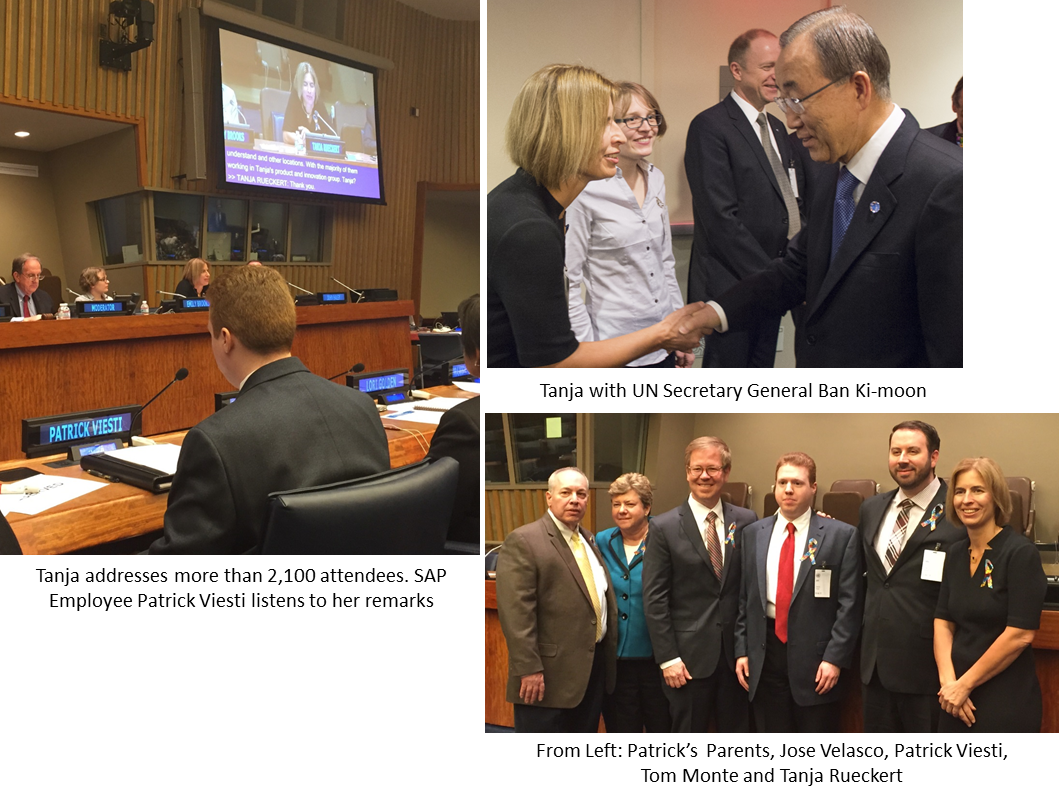 This United Nations World Autism Awareness Event Video captures the entire event. A very special thanks to Jon Herbertsson from the United Nations for his amazing work. This was a truly remarkable event.