Before starting the project we should know why we selected both Arduino and Raspberry Pie .

The Raspberry Pi is a low-cost credit-card-size computer with an ARM-processor that has a huge community to help build applications .Raspberry Pi can multitask processes—it can run multiple programs in the background while activated. For example, you can have a Raspberry Pi that is serving as both a print server and a VPN server at the same time.

On the other hand Arduino is a microcontroller with easier capability to integrate analogous input, The Arduino IDE is significantly easier to use than Linux. For example, if you wanted to write a program to blink an LED with Raspberry Pi, you’d need to install an operating system and some code libraries—and that’s just to start. On Arduino, you can get an LED light to blink in just eight lines of code. Since Arduino isn’t designed to run an OS or a lot of software, you can just plug it in and get started.

On the other hand, you can leave an Arduino plugged in as it conducts a single process for a long time, and just unplug it when you’re not using it. This is why expert would recommend the Arduino for beginners before going for Pi.

As per Limor Fried, the founder of Adafruit, a DIY electronics store that offers parts and kits for both Arduino and Pi projects, “The Arduino is simpler, harder to ‘break’ or ‘damage’ and has much more learning resources at this time for beginners, With the Pi you have to learn some Linux as well as programming—such as Python. The Arduino works with any computer and can run off of a battery. You can also turn it on and off safely at any time. The Pi setup can be damaged by unplugging it without a proper shutdown.”

The ultimate answer when deciding between the Pi and Arduino is, “Why choose?” If you’re looking to learn about IoT, each one will teach you something different.   Raspberry Pi and Arduino are complementary. Ideally expert suggests a scenario where the Arduino is the sensory workhouse, while the Pi doles out directions.

So we are going to do exactly that , in this our 3 step  blog we are going to use arduino that is to interface analogous and provide data in digital format to Pie and Pie should take care of communication to SAP HANA.

Step 1: Connect Arduino to Computer and checking the Analog input is working perfectly .For this Experiment we are choosing Photo sensors which will detect the intensity of light and will give the data to computer by serial port communication.

Step 2. Connect Raspberry Pie to Arduino and able to establish the same configuration which was achieved via computer and Arduino .Also setting up webserver in Raspberry pie which can communicate over internet.

Step 3: Storing data into the SAP HANA system from pie and displaying it using SAP UI5 in near real time.

For this blog we are going to perform Step 1:

First install the Arduino Kit from here to your computer, for me it is windows .It looks like this after installation:

Now for this demo we are going for below circuit diagram: 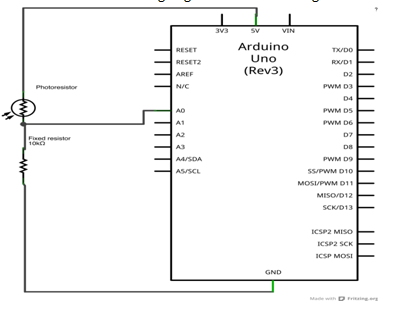 And mine circuit looks like this in real world 😉 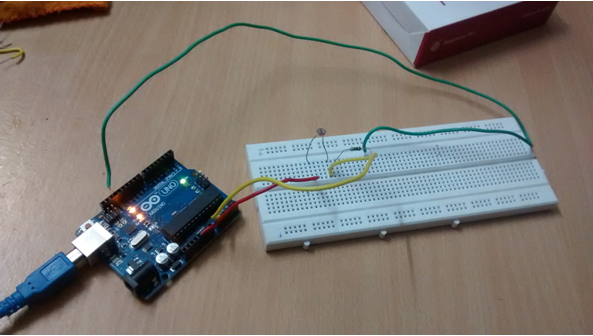 We are going to use code which takes Analog input from serial output:

Here we are trying to read the analog signal from the photo sensor via Arduino and then Arduino is going to send it via Serial port to computer and use it to show the data reading of the sensor.

And to see the magic open the serial Monitor in top right side of the program. 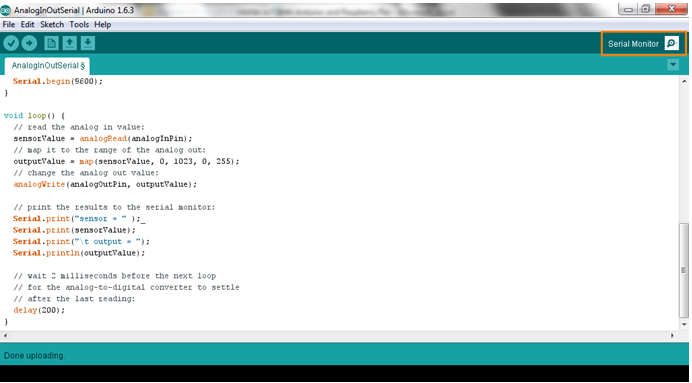 We have demonstrated the result of the step 1 in a short video which is here.

The current status is all the parts are done and  i am just compiling the entire blog .

Due to many steps i have extended it into 5 step blog , you can find the part 2 and part 3 in my personal website at UI5CN , but i will be posting them at a time in SCN once i finish documenting part 4 and part 5 .

Good news ,finally we are able to publish the entire effort in a SCN blog ,link here .

Also we have covered the entire demonstration in video available in youtube and Udemy.

Also check UI5CN for other incomplete works will be posting them in SCN as soon as finished .