SAP’s Thomas B Kuruvilla provided this webcast on US Tax Day, assisted by Gowda Timma Ramu

I thank them both for taking the time to support ASUG.

The usual legal disclaimer applies, that things in the future are subject to change. 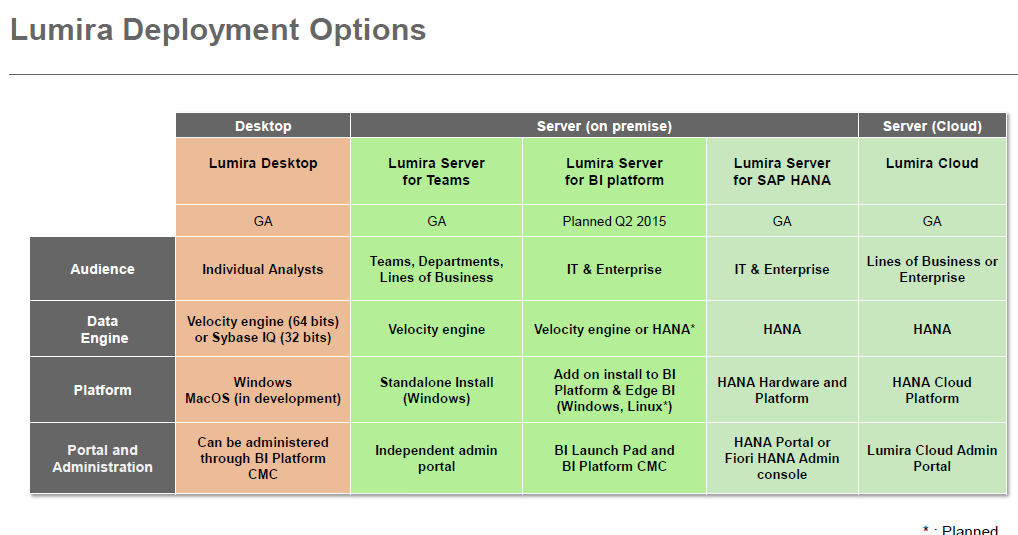 Server options for on premise include Lumira Server for teams, which is for a line of business for small teams, stand alone, admin, 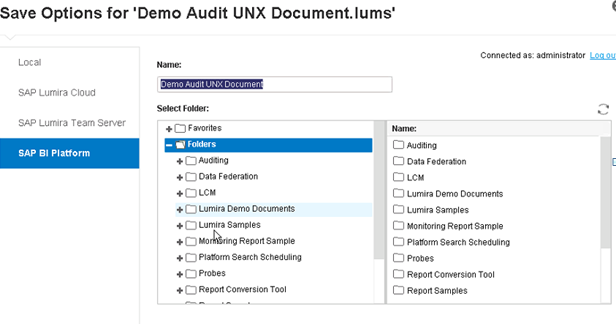 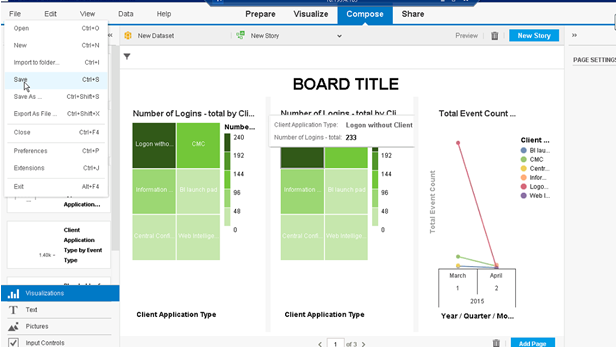 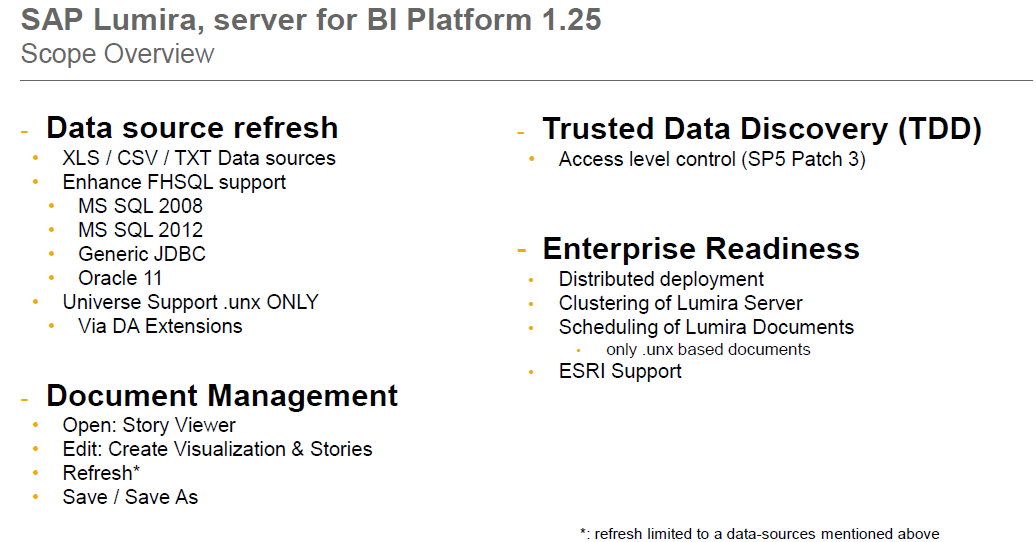 A new query panel is delivered as an extension

ESRI support is planned for 1.25 release 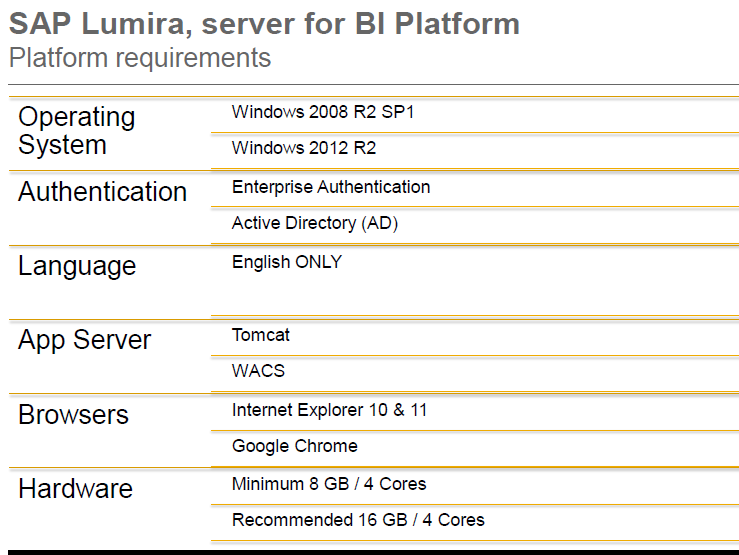 Only English is supported. Browsers supported are IE10/11 and Chrome 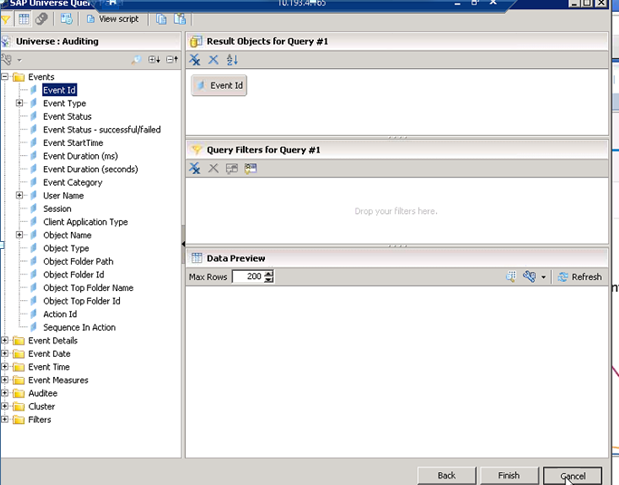 Same host deployment is for testing, small production.  For production, SAP says to size the server – how many concurrent users?

What is the average document size? 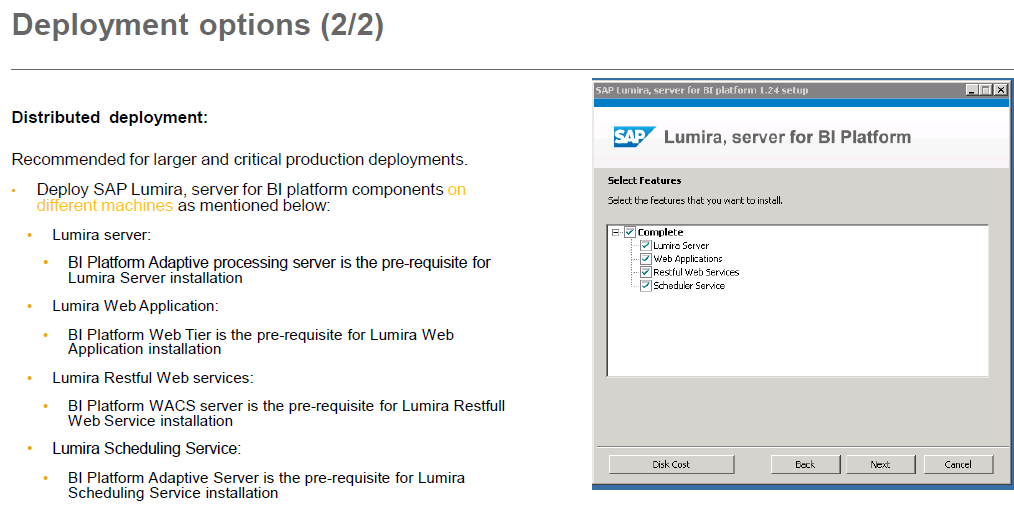 SAP recommends a distributed deployment for larger production deployments; an APS is needed.

Screen on the right what is shown when installing

To support document refresh, the file needs to be in same location

It does not support HANA for refresh

Query panel extension is a manual install – separate but simple 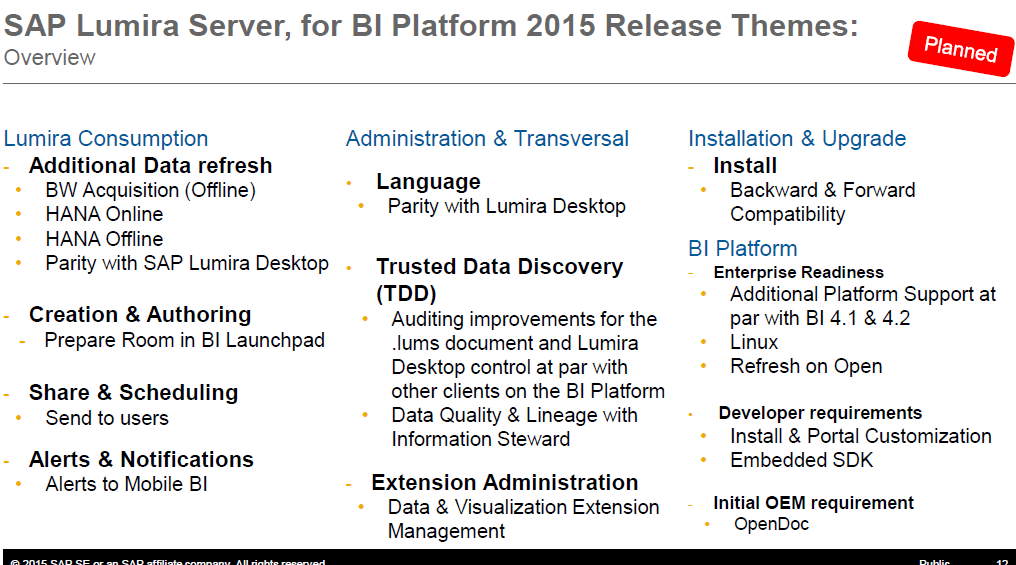 The plan is to bring back Information Steward for data lineage, and they are investing on extension management

Q:  Any plans to introduce SAP Lumira in-memory engine into Design Studio? I think it will help with speed for NON- HANA customers and also with interoperability between these tools

A:  I am not aware of any such plans for in-memory engine in Design Studio. However, we do have plans for interoperability between these clients

Q:  Will there be architectural change on our end when updating to HANA as calculation engine later this year?

A:  No changed in architecture, HANA would be used as a calculation engine when you create Lumira document with HANA Online

Q:  what is velocity engine?

A:  It is a light weight in-memory engine used in lumira desktop and lumira server

Q:  Is velocity engine is nothing but IQ?

Q:  When will connection to BICS connections be available?

Q:  What is the source for this document?  Does it require a universe?  Can it source BW?

Q:  Is there no data source refresh for HANA views?

A:  Not supported with Lumira Server for BI Platform 1.25, is planned for future release. in the meantime, you can use Generic JDBC or UNX on HANA Views as the source

Q:  When will SAP “Authentication” be supported for SAP Lumira Server for BI Platfrom…?

A:  SAP Authentication is planned to be supprted along with support for BW Acquisition in late Q2

Q:  SAP Lumira server for BI Platform is seperate installation or its going to be part of future BO-BI platform installer?

A:  It is going to be an add-on for the near future including on BI 4.2

Q:  Would generic JDBC allow for “live” querying on the views?

A:  No, it would create and update the dataset on manual Refresh

Q:  Is there any limitation to no of rows/data volume that Lumira velocity engine can handle or is it dependent on the Server Hardware memory?

A:  We are currently working on the Sizing recomendation. we would be highlighting the numbers as part of sizing guide. for now, you can reffer to http://www.sdn.sap.com/irj/scn/go/portal/prtroot/docs/library/uuid/60271130-0c90-3110-07a0-fe54fd2de79d?QuickLink

A:  Not all UNX and UNX features would be supported, would have the limitation documented in Lumira Desktop user guide

Q:  Related to sizing, would Velocity Engine resource utilization be higher/lower/same as the Explorer Server utilization on the same volume of dataset?

A:  unlike explorer , while working with the Lumira Document on BI Platform, the entire dataset would get loaded into memory. It would be multiplied in case of merged datasets.

Q:  Will there be any SIZING of SAP Lumira Server for BIP sessions ready for SAPPHIRE or ASUG SABOUC Conferences…?

A:  Thomas has a SAP Lumira Deployment options session BI1044 + we have round table sessions

Q:  Is there a plan to support Bex Query/BICS? Can we access BW data using an QLAP Relational universe now?

A:  support for BW data acqisition using Bex Queries is planned for late Q2. Yes, you can use Relational UNX on BW

Q:  Is there a support for Oracle based UNX universes

A:  Yes, UNX based on relational data sources are supported

Q:  Will Lumira Server for BI Platform be supported on a Windows OS?

Q:  If the XLS file is hosted on the BI Platform. Can you use that XLS/CSV file as a source for Lumira

A:  No, the files have to be on the file system

Q:  Can Lumira Documents be accessed from the Mobile app if it is published to the BI Platform. Does this need to be Enterprise or AD Auth only?

A:  support for viewing Lumira stories on Mobile BI application is planned for future releases

Q:  Why is the Universe Query Panel an extension and not built-in? Will the existing built-in option eventually be replaced with the new extension? Having two universe options with different functionality will cause confusion for users and a support nightmare.

Q:  How will Lumira BI Server and Lumira Server on HANA co-exist

A:  Had this with LIMA – see blogs on SCN elaborate for LIMA

A:  Lumira Server for BI platform does not require HANA

A:  Yes, we have 4 components as part of installer. Lumira Server, Lumira Scheduling service, Restful Web Service and Lumira web application. all can be deployed on seperate boxes with pre-requisites

Focus on Analysis Office, Lumira, and Design Studio. You get to work with these for 7 hours! Full day BI workshop. Limited to 30 people. One person per machine (no sharing). Join us May 4th for ASUG Annual Conference Pre-conference Hands-on Design Studio, Lumira, Analysis – see thisblog