Recent version of SAP Lumira offer connectivity to SAP BW through Infoproviders or Queries so I wanted to check this out.

Lately I’ve been looking at SAP BI reporting options to report (using custom queries) on data that is stored inside SAP Solution Manager.

What I’ve got right now is reporting on the statistical (ST03N based) data of managed SAP systems. Data is pulled into SAP Solution Manager through IT Performance Reporting (specific extractors are scheduled in for this) and as a second step, I’ve build custom queries using BEx Query Designer to get the output the way the customer wants to have it as they self-defined thresholds which don’t necessary match what SAP brings in as KPI’s in Earlywatch Alert Reporting for example. 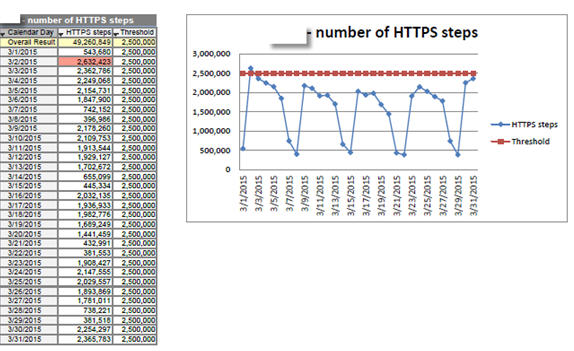 In the above screenshot you see sample output in Excel (through Bex Query Analyzer). I’ve used SAP Learning Hub content to get knowledgeable on the basics of Bex tooling as you can read here. Then with the help of some friends, I managed to get a decent solution going in Excel so my dataset adjusts automatically in the accompanied graph (using OFFSET function in Excel to achieve that).

To get my query visible in SAP Lumira, I published the query to a role using Bex Query Analyzer as you can see below: 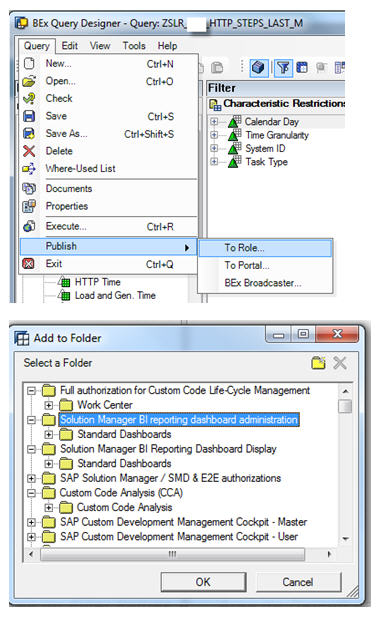 Since this was more an experiment than anything else, I just picked one … if you want to use this properly, I would suggest you tie it to a customer specific role instead of picking a SAP standard one.

Next, I boot up SAP Lumira and click on acquire data. As the next step, I click on Connect to SAP Business Warehouse*
*Note that this feature is not available in the personal edition. It’s available during trial period (for non productive use) or in the full edition. 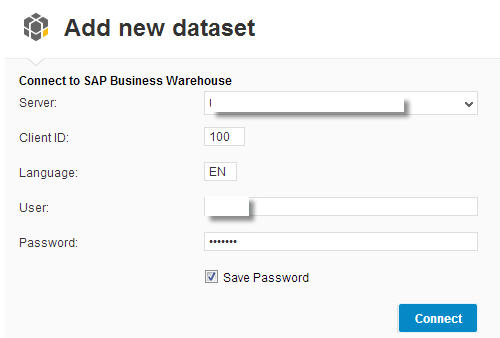 You should then get your SAPlogon system list through the dropdown box and you select your SAP Solution Manager system (or your BI system is you don’t use the embedded BI for Solution Manager) and click connect.

Next, I pick « Roles » from the dropdown to see the query I added to the SAP standard role folder.

The dataset creation took about two – three minutes time which is comparable to the performance I get in Bex Query Analyzer since data has to be fetched out of Solution Manager and the data is not yet cached.

Once loaded, SAP Lumira places the data in table format immediately based on the query properties so the only thing you need to do to get the respective graph is click a chart type under chart builder which is what I did here, I choose a line graph to display the number of HTTPS steps of last month of a given system. 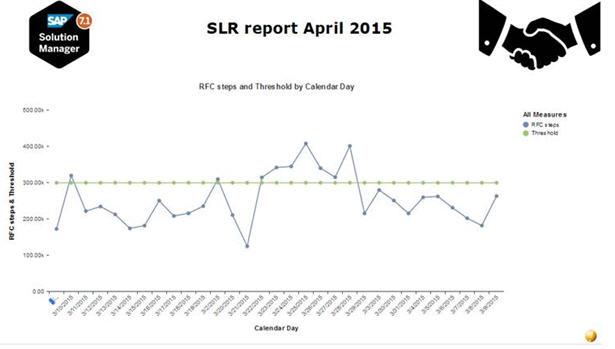 Another small exercise I did was save the result of a Bex Workbook (leverages Bex Query Analyzer add-in in Excel) into XLSX format and using that as a source to feed into SAP Lumira. This way I can create an info graphic for example and I could combine multiple graphs. What I like about SAP Lumira is the ease of use and how little effort I had to do to get the graph in the way I wanted to have it. Getting the same result in the Bex Query Analyzer takes much more time.

Thank you very much for the information that now we can connect Solman BI with SAP Lumira for dashboard creation.

Presently i am working on the couple of management dashboards using 0CCMPDATA multiprovider.and i am successful in getting the required output using BW query.

1. Earlier i used X-celcuis tool to create the SWF and XLF files . And managed to get the output in Dashboard after long configuration . Now i was checking the option to connect the BW query using BO dashboards and data connection using solman as a SAP BW system. But no sucess here. Getting error # 2032. (May be because  of  BCI Remote services not running in solman Java)

2. through this blog we have another option to connect it to SAP Lumira. It will be great if you share more info . "how did you connect solution manager with SAP Lumira"

Next, I boot up SAP Lumira and click on acquire data. As the next step, I click on Connect to SAP Business Warehouse*

Thanks in advance for your reply.

1) no idea, haven't done that yet. Next thing I'll be checking out is connecting to Web Intelligence

2) that's pretty easy actually because SAP Lumira detects my local saplogon.ini file and leverages it so normally you shouldn't have to do anything specific to get that list of systems shown in SAP Lumira as long as you're SAPgui is configured on the same front-end. If you run into issues, several threads exist on SCN forum which explain what to do

Nice, I updated my SAP Lumira to 1.27 and I'll put out another blog post where I check out the new option in regards to SAP Solution Manager data.

Nice work Tom. Lumira and SolMan compliment each other well!

Thanks. It will be interesting to see what Cloud 4 Analytics could bring to the table in connection to SAP Solution Manager.