UPDATED — IoT at SAPPHIRE and the Debut of HCP IoT Services 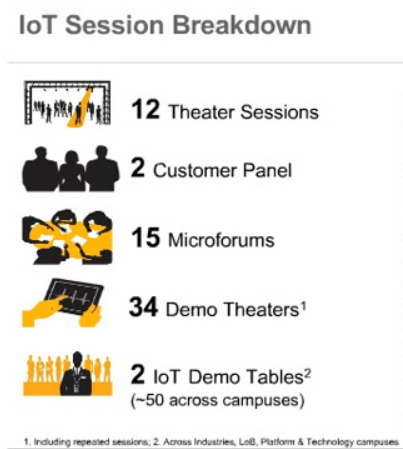 This post has been updated to include the IoT Services sessions as well as to reflect the ASUG webcast series.

Internet of Things will be huge at SAPPHIRE, TechEd, and other SAP events this year.  As developers, you are perhaps already playing along with HCP scenarios using your handy Raspberry Pi and the like.

Soon you’ll be able to work with SAP’s new product offering on HCP and IoT together. In just a couple of weeks at SAPPHIRE we’ll be debuting SAP’s IoT offering called HANA Cloud Platform, Internet of Things Services (IoT Services). Arriving at SAPPHIRE from SAP will be SAP Product Managers and experts alike to show off these IoT Services.

Of note if you’re at SAPPHIRE and interested in checking this out: Joe Binkley will be at the Demo Theatre doing a session called Harness the Power of the IoT with SAP HANA Cloud Platform that shows you how to “use the adaptability and simplicity afforded by SAP HANA Cloud Platform to take full advantage of benefits and insights offered by the IoT while managing costs, streamlining IT, and innovating faster in the cloud.”

At the demo pod, SAP Product Manager Carsten Puschke will be on hand directly from the team in Germany to show an end-to-end demo using IoT Services.  Stop by to see IoT Services on HCP in action at either of these sessions or the other sessions, forums, and panels in which IoT will be featured this year.

In addition, as developers, you also need to be able to elaborate the business ramifications so you can continue to push to do the important things at work.  If this is you, stay tuned for an upcoming ASUG webcast series called Internet of Things (IoT) in Five Weeks – ASUG Value Accelerator Webcasts Series.

Looking forward to seeing what you do with HCP IoT Services!